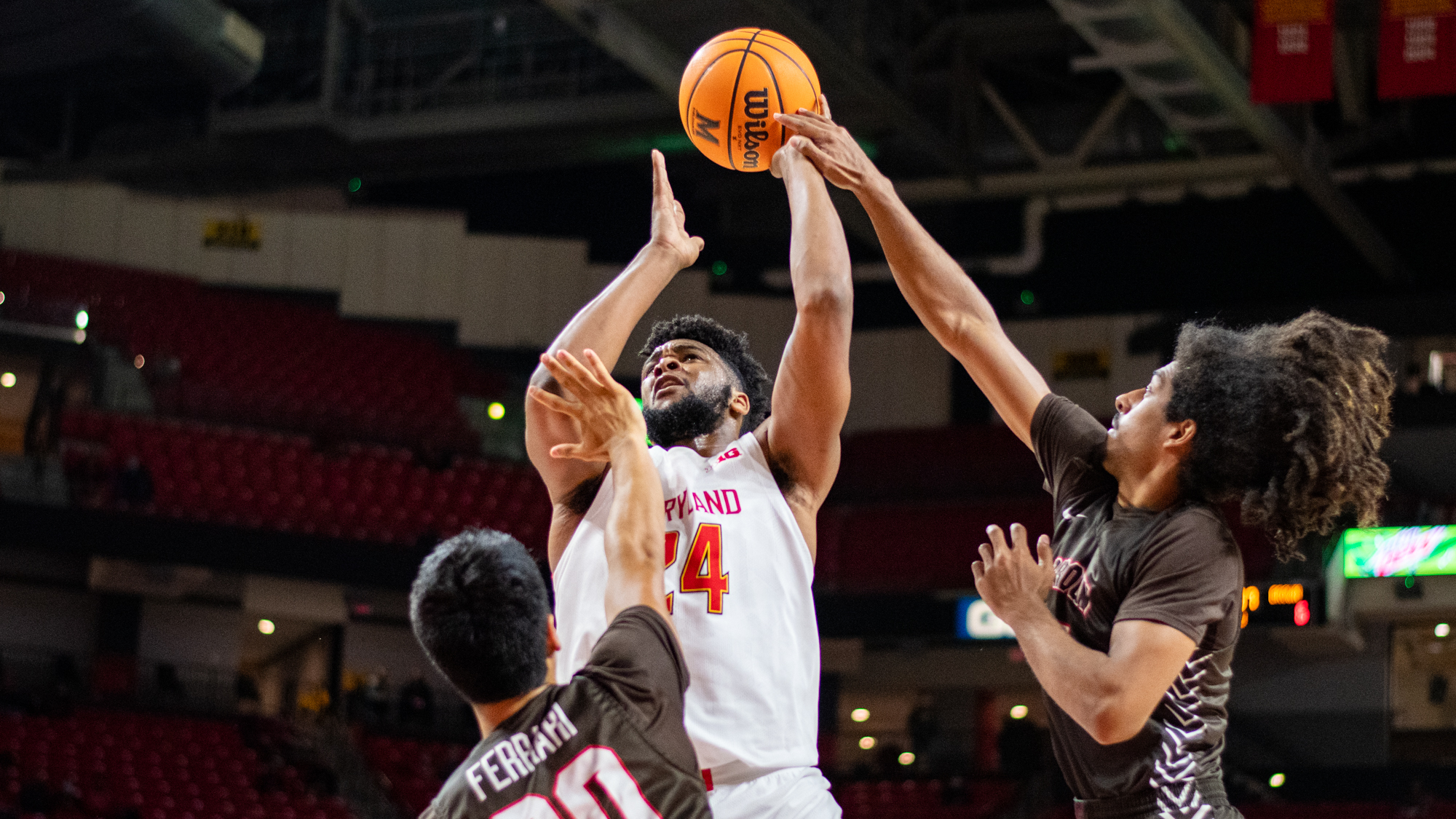 Julian Reese took a dribble before taking flight. The freshman launched himself toward the basket, hammering home an emphatic dunk right in the face of Kofi Cockburn, the preseason Big Ten Player of the Year.

Reese hung onto the rim for an extra few seconds, letting the moment sink in as Maryland men’s basketball held onto a slim lead over Illinois.

But in a matter of time, Cockburn got his dunk bank, yelling out toward the crowd after finishing above Qudus Wahab.

Cockburn was a bit of a non-factor in the first half, but the All-American was biding his time to take over in the second half with 16 points and 15 rebounds to see through a victory over the Terps, 76-64.

“Kofi is one of the most dominant bigs in the country,” interim head coach Danny Manning said. “When he’s able to carve out space like he did today, he’s a tough cover.”

Maryland (8-6) walked into its second straight road game winless in the Big Ten, looking to capitalize on a positive performance against Iowa, despite a negative result.

The Terps began just as they have most of the season — slow.

Kofi Cockburn ran roughshod over Maryland on both ends, making shots tough on Wahab in the post while finishing well at the basket himself. After nine minutes, the Terps sat in a dismal 12-point deficit. Maryland struggled from the field and from the foul line in the early goings.

But the major contribution that pulled Manning’s squad back in the game was attracting fouls and getting them on the best player on the court — Cockburn.

After Cockburn committed his second personal foul he was immediately substituted for Coleman Hawkins. When he left the court, the Fighting Illini (11-3) held a 13-point lead. By the time he took the court again in the second half, his team was trailing.

“I thought when we had a chance to take it at him and draw some contact, we did a good job of that,” Manning said.

Without Cockburn, the Terps began to roll on offense, finding more space in the paint without the center’s towering presence.

Hakim Hart knocked down both of his free throws from Cockburn’s foul and plays from the field began to fall into place. Reese was able to manage a putback in the paint, quickly followed by a coast-to-coast layup for Eric Ayala.

Ayala hit one of the few early baskets for Maryland, getting a lucky bounce on a three-pointer. But from then on he was clinical in finishing and working the paint for scoring opportunities.

He finished the opening half with 10 points on 3-of-3 shooting from the field and the foul line.

“We’ve been in Big Ten play,” Ayala said of his recent offensive surge. “So I kind of wanted to get ready for Big Ten play and just let the game come to me.”

Some clutch plays from Ayala helped the Terps claw their way back into the game, but Donta Scott was the one to push Maryland ahead of Illinois.

Scott has not been as consistent shooting from the field as last season when he was almost automatic from beyond the arc. With less of a defensive force in front of him, Scott reigned supreme across the key late in the first half.

Two picture-perfect threes and a handful of physical drives from Scott put the Terps ahead at the half, 34-30, off the back of Scott’s 15 first-half points.

The second half brought back the challenge of holding onto a rare first-half lead. It also brought back Cockburn.

“It made a big difference,” Scott said. “He’s a big guy down there. I knew Kofi since I was in high school, he always been like that. He’s always been a challenge.”

It was a quick start for Maryland with Hart scoring a short-range jumper. But it was just as quick for Cockburn who hit a tough shot over the head of Wahab.

The Terps and Illini traded makes with Maryland just keeping an edge. Reese sank home his emphatic dunk. He fouled out with five minutes to go, but put up a handful of highlight reel-worthy plays against one of the top centers in the nation.

“It kind of reminded me of my freshman year, the first game I played against was [Len] Bias,” Manning said. “I walked away from that game impressed by Lenny Bias, but I also walked away saying ‘You know what, if I can keep up with him, if I can compete with him, I’m gonna have a chance to do something special.’”

After Hawkins converted on an and-one situation, Scott was able to back down a defender and finish a hook shot. Ayala sank another three, but that would be the last time the Terps saw the ball fall through the net for over four minutes.

Cockburn and Williams each found scores in the paint before Trent Frazier got one of his own to put Illinois ahead for the first time since the opening half.

Frazier apparently wasn’t satisfied with just putting the Illini ahead — he wanted to make it emphatic.

On back-to-back possessions, he sank three-pointers, after starting the game 0-for-6 from beyond the arc, to give Illinois all of the momentum.

Cockburn stayed on the court and proved himself the dominant big man, relegating Reese and Wahab to the bench after each fouling out.

Maryland put together another solid performance against a heavily favored opponent, but it was no match for Cockburn and his Illini.

“Throughout this road swing that we’ve been on, we’ve shown that we can compete,” Manning said. “Now we’ve gotta do a better job of finishing. That’s something we’ll continue to talk about and work on as a team.”