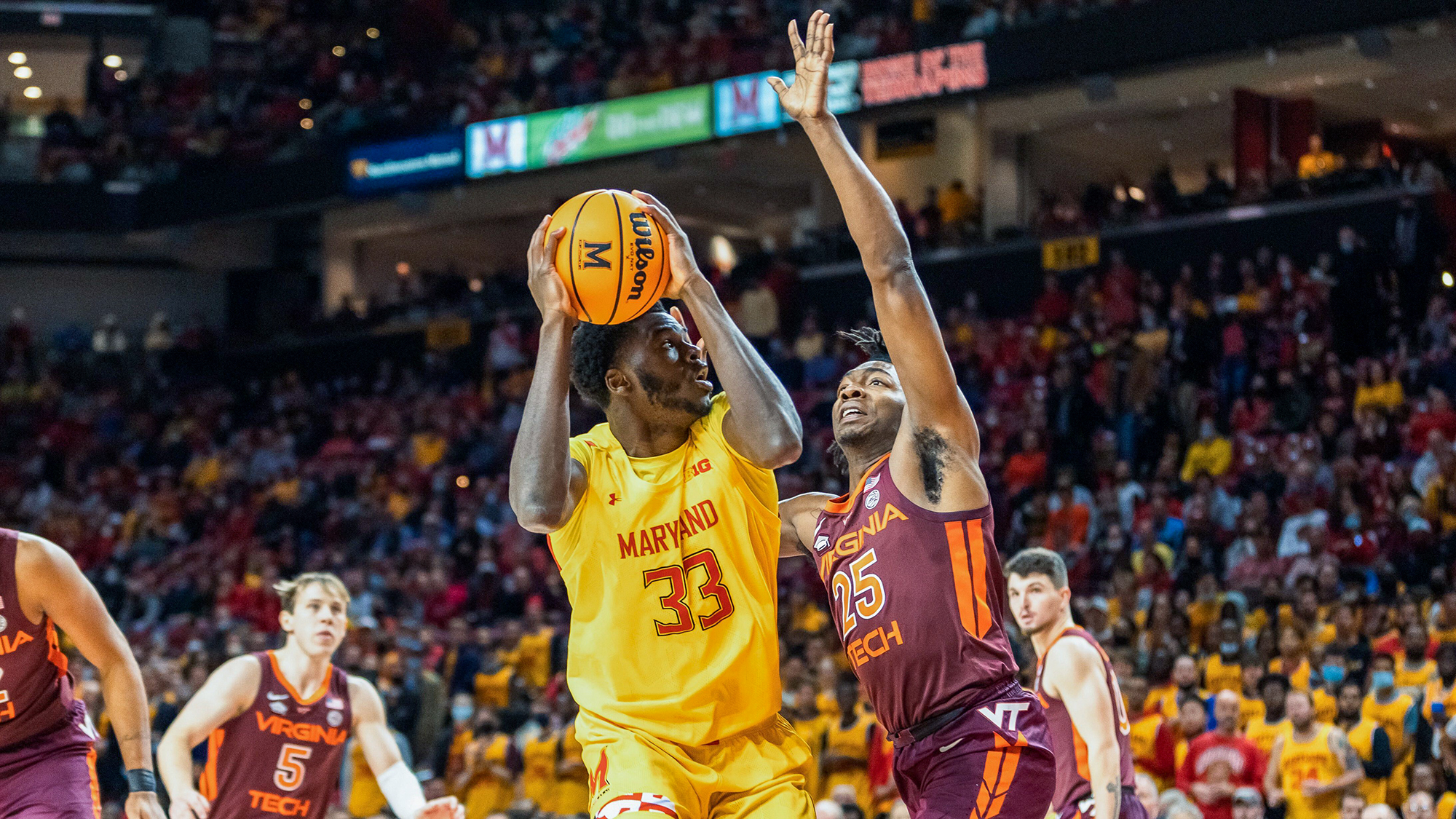 After Maryland men’s basketball had led in the early goings of the second half, Virginia Tech regained a lead with 5:45 left to play.

Nahiem Alleyne dropped a three by his team’s bench to put his team up 49-46. And the Hokies didn’t stop.

They charged out to a 59-52 lead in a matter of minutes. Maryland mostly broke up Virginia Tech’s scoring streaks with free throws and the rare basket.

As the one-minute warning echoed through the arena, Donta Scott hooked a shot over a Hokies’ head.

It fell in the basket. And the Xfinity crowd roared.

With 20 seconds left, Justyn Mutts dropped a jumper and put the game out of Maryland’s reach. Virginia Tech won a tooth-and-nail fight and topped the Terps in the ACC/Big Ten Challenge, 62-58.

“We gotta figure this out. We’re better,” coach Mark Turgeon said. “We’re all frustrated because our standard here is high at Maryland and the expectations were high coming into this season.”

The first points of the game for each side were indicative of the pace for the evening. Alleyne opened the scoring with a three for the Hokies and Scott immediately followed with a three of his own.

Scott’s bucket was greeted by the largest applause Maryland has had to begin any home game this season.

The gold-clad Xfinity Center crowd roared at the Terps’ first points of the match. And it stayed enthusiastic when Qudus Wahab extended Maryland’s early lead with a thunderous dunk.

The Terps’ first half was all Wahab — he dropped 14 points, and no one else came close. Scott finished the half with seven points and the other Maryland players who scored only dropped two apiece.

Eric Ayala made his presence known with a fadeaway near the Hokies’ bench. But that was his sole basket of the contest.

“We’re not making a lot of shots,” Turgeon said. “And they’re not going to let Eric get a shot.”

Turgeon’s squad opened the game without its rebounding woes from its match against Louisville. The Terps pulled down 16 boards, but the Hokies snagged just as many in the opening period.

As the first half wore on, Maryland’s defense weakened and Virginia Tech encroached on it’s lead.

Soon enough, the Hokies took over. With 8:34 left in the first, Keve Aluma laid the ball in the basket to tie the game at 16.

Maryland left the court at halftime with its usual deficit. After a first half with eight lead changes, it seemed another comeback would be necessary to get ahead of an evenly-matched Hokies squad.

The Terps came out reinvigorated in the second — they went 8-0 after a Hokies bucket opened the half. Hart dropped four points in the paint, Wahab clocked another score and Fatts Russell sank only his second basket of the game on a driving layup.

The Hokies began to fall behind. Virginia Tech shot 1-13 from the field until 10 minutes remained in the second half. The Hokies played just under a nine-minute stretch without a field goal.

Their scoreless streak was broken by a three from the corner by Hunter Cattoor. But he didn’t get it easily. Julian Reese swatted two shots down on the same possession before the ball made it to Cattoor.

All the while, Maryland powered on. Xavier Green splashed a jumper from mid-range and Reese dunked over multiple Virginia Tech heads.

But the Hokies fought back to a lead again.

“We just had chances where we could’ve took a lead or more but we just didn’t,” Hart said.

Alleyne’s three on a turnover by Ayala, layups from Cattoor, David N’guessan and Aluma were only broken up by two good free throws from Wahab, who finished the game with 18 points and seven rebounds.

Yet again, the Terps would necessitate a comeback to win.

Perfect free throw shooting down the stretch and stout defense put Maryland back in position to strike. The layup from Scott knocked the lead down to one. But the contested layup from Mutts put the Hokies out of reach.

The Terps’ 1-13 shooting from three already put them at a disadvantage, but it made the final chance at a comeback impossible.

“We tried to come together, just kinda figure out what was going on, but they made big shots,” Scott said. “Gotta give credit to them for knocking those shots.”