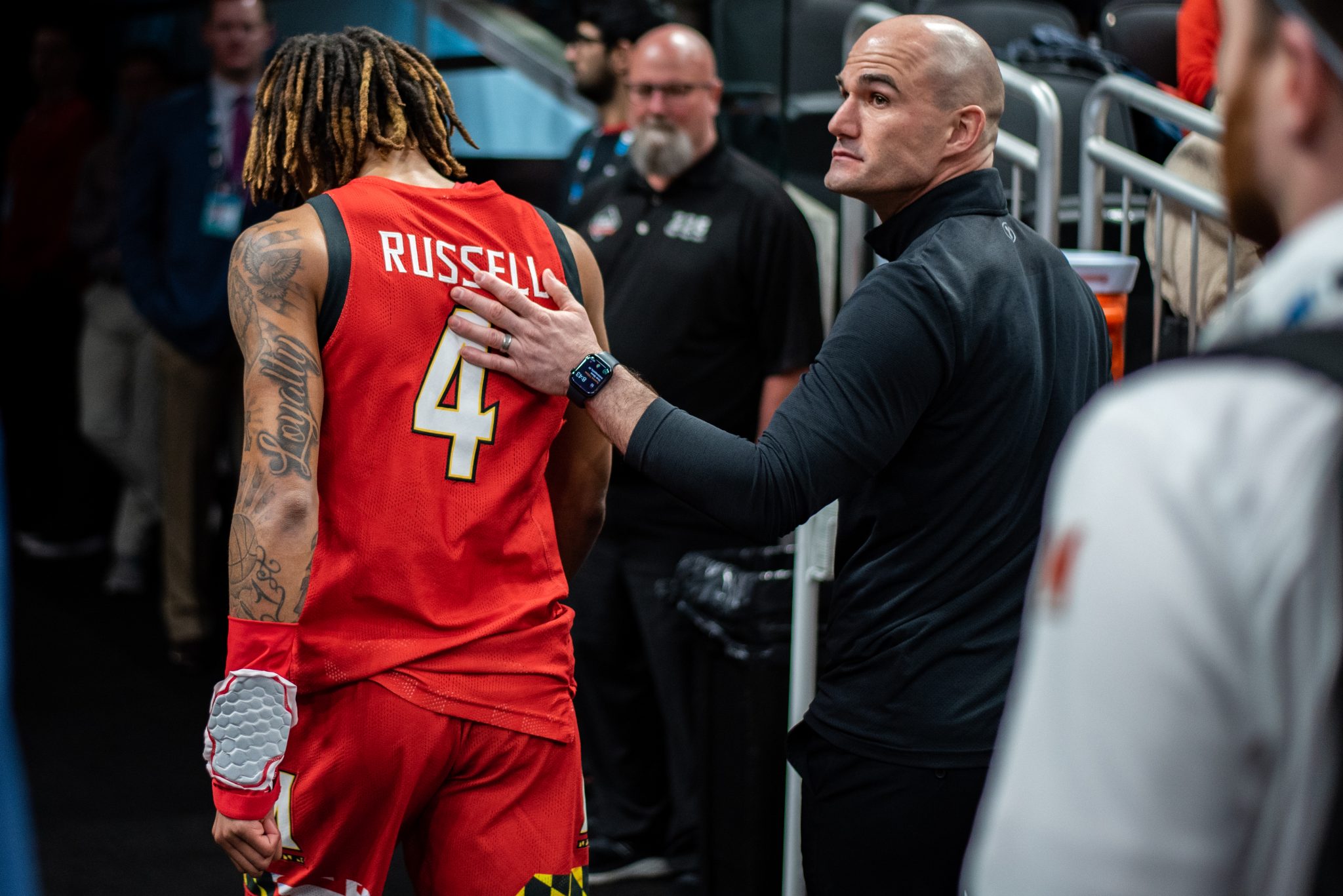 INDIANAPOLIS — There was no way Eric Ayala was going to miss the first shot he took in the Big Ten tournament.

The senior guard had been on this stage before, and with his collegiate career potentially coming to an end, he fired the first shot for Maryland men’s basketball and saw it sink into the basket.

“I mean, it just came, it was an opening shot in a neutral court,” Ayala said. You’ve got to find a rhythm and just figure out where it’s at. I was just trying to help my team and it was an open shot that I made. That’s all it really was.”

The Terps missed their first 14 shots when they played Michigan State just four days earlier, but when it came down to it, Ayala made the first one count.

Ayala and Fatts Russell were faced with career-ending stakes and the pair did what they’ve done all season — fight until the end.

Maryland was unable to come away with a win, but for one final time in a Terp uniform, the dynamic backcourt refused to go away quietly.

“Those two guys certainly for us have been two guys that have been cornerstones for our team this year,” interim head coach Danny Manning said. “We thanked them and we love them for what they brought to the table this year.”

Russell and Ayala combined for 37 points in Maryland’s 76-72 loss to the Spartans in the second round of the Big Ten tournament.

After Ayala set the tone, Russell was quick to follow with a three of his own. It gave the Terps their first and only lead of the game at 6-4.

As Michigan State began to slip away, Russell and Ayala didn’t give in. The two had 21 of Maryland’s 34 first-half points.

Russell in particular was a force across both ends of the court. The graduate guard led the team in points, rebounds, assists and blocks.

In what is just about guaranteed to be his final game, Russell made it count.

“We had three seniors that played today,” Russell said. “It’s probably our last college basketball game, so what you see out there was like Eric said, desperation. We just didn’t want it to be our last game with each other.”

With the lead building to 20 points in the second half, it looked like the Terps were ready to fold despite some solid play from the guard duo. But Maryland snapped into gear.

Three minutes remained and the Terps cut the deficit to 13. Still a large gap to retread, but as Maryland proved, not impossible.

Four baskets from the foul line by Ayala and Russell set the Terps down by just eight, the lowest margin since the final minute of the opening half.

Maryland continued applying a press to the Spartans that stifled them for the final few minutes. As Michigan State struggled to play against an unusual Terp-press and the lead evaporated.

A dunk by Hakim Hart followed by a game-altering three by Russell off of another steal pulled Maryland within three. The Spartans took notice.

“I do love a couple of those players. Ayala and Fatts Russell, they’re special players and they seem like special guys,” Michigan State head coach Tom Izzo said. “I’ve really enjoyed competing against them the last two weeks.

A pair of free throws from Tyson Walker pushed the Spartans back ahead. Another moment for the Terps to roll over.

Russell rammed his way through the paint to dish a layup into the net while getting the call for a free throw. Another two-point game.

But not for long. Walker hit a turnaround jumper and Max Christie made free throws. It would’ve surely been the end had it not been another Hart layup and — yet again — a steal in transition.

Ayala pushed a layup in with 16 seconds left. Down to a one-score game, but it would be the final time. Ayala got one final steal for good measure, but Russell missed his chance at a go-ahead three.

Another look at Fatts Russell’s attempt at a winner. pic.twitter.com/O9cxrQDyYt

That was all the Terps could manage at the end.

Maryland seemed to be brewing a miracle. But even Russell and Ayala couldn’t save the day this time.

The Terps ended a historically poor campaign, finishing below .500 for the first time in 28 seasons. However, the performances of Ayala and Russell for stretches of the season — and in the Big Ten tournament — will not be forgotten anytime soon.