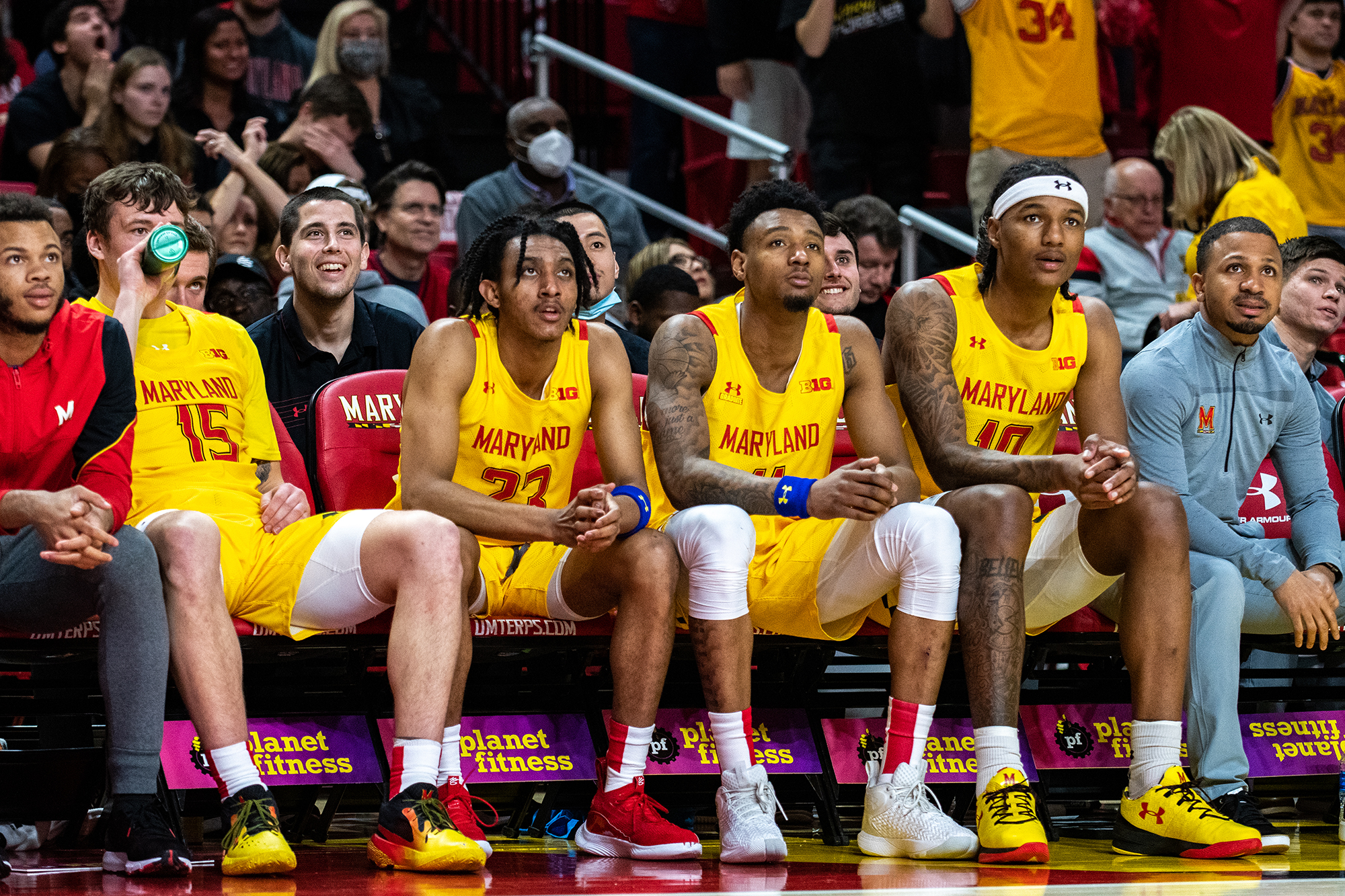 Simon Wright, Ian Martinez, Xavier Green and Julian Reese sit on the bench during Maryland men's basketball's 84-73 win over Minnesota on March 2, 2022. At the beginning of the season around half of the incoming team was new to the Big Ten Conference and has had to adapt to playing in a bigger league. (Joe Ryan/The Diamondback)

Before a Feb. 24 matchup with Indiana, the last time Danny Manning had set foot in the Hoosiers’ famed Assembly Hall was when he was a high school senior, trying out for the U.S. Olympic Basketball Team.

One of the benefits of joining the Maryland men’s basketball’s coaching staff, for Manning, was getting the chance to go to some of the basketball havens he’s only seen on TV or has distant memories of.

“It’s been fun for me,” Manning said. “This is the first time I’ve been a part of this league. To experience going into all the different gyms I got a chance to go into, as a basketball junkie, has been fun.”

The Terps’ interim head coach has experienced the trials of the Big Eight Conference as a player, and the Big 12, C-USA and ACC conferences as a coach. But the Big Ten was a new challenge.

Manning was named the interim head coach of Maryland men’s basketball on Dec. 3, 2021, when it was announced Mark Turgeon and the team had mutually agreed to part ways after just eight games of the 2021-22 slate.

About a year-and-a-half after being fired from his job head coaching Wake Forest, Manning was now at the helm of a program he had joined just eight months prior.

It was a shock for just about everyone — including Manning.

There were only two days until the Terps’ first Big Ten game of the season. And it wasn’t just the first one for Manning but for more than half of his roster.

Turgeon worked the transfer portal over the offseason in hopes of finding the necessary pieces to capitalize on a surprise NCAA tournament appearance in 2021. Before the campaign began, it looked promising.

Six incoming transfers added depth and skill in shallow positions for Maryland. But after a full Big Ten slate, the Terps experienced their worst conference record since 1993.

Faced with the upcoming Big Ten tournament — where the next loss Maryland suffers almost guarantees the end of its season — the Terps have an uneven season of growing pains from their newcomers to reflect upon.

“You work all year long to prepare for this moment and it’s here,” Manning said. “We know we have to go out and do whatever it takes to extend our season.”

Nine new players on a team and a head coach who’s never been in the conference are tough hurdles to overcome. At times Maryland’s been able to, but at other times they’ve stumbled at the jump.

Those six transfers all joined the Terps at different points in their careers, but each one wanted the challenge. Whether they came from the Pac-12 or the Atlantic 10, the difficulty of being in a conference the caliber of the Big Ten was not lost on them.

Green was one of three graduate transfers to the Terps, alongside Fatts Russell and Simon Wright.

While all three produced in their final regular season, it was Russell who took to the Big Ten the most. Named an All-Big Ten honorable mention, the Rhode Island-transfer made a name for himself through his relentless play on both ends and undeniable speed.

“The physicality bothered me at first, the first probably one or two games,” Russell said Jan. 28. “But I continued to work in the weight room, continued to watch video, watch film, get stronger physically and mentally.”

The Big Ten is known as one of the most physical conferences in the country. It’s an aspect senior Eric Ayala says players need to “embrace,” otherwise they get left behind.

Russell is shorter than the average Big Ten star, but one drive to the basket and it’s clear he doesn’t back down. Juxtaposed with his former competition in the Atlantic 10, Russell said most players from big-men down to guards are bigger and play with more aggression.

“That just makes the game more difficult when there’s more length and more physicality off the ball,” Russell said. “There’s a lot of grabbing, tugging. Going to the rim, you’re not just going to get clean layups. That’s something I had to learn. I had to learn it quick and make that adjustment.”

While Russell dealt with Big Ten size as a guard, Maryland added its own new length in the offseason with freshman Julian Reese and transfer Qudus Wahab.

The Terps were elated to have two options at center after a year without a reliable big-man, but they’ve each struggled to become dominant in the paint.

While Wahab showed capacity for strong play down low, double-teams flustered the junior all season.

Reese has shown a similar affinity for strength, but matched up against some of the best bigs in the country, including Kofi Cockburn, Hunter Dickinson and Trayce Jackson-Davis, his youth showed.

But as far as a freshman season went, Reese and his teammates believe he rose to the challenge in a tricky Big Ten.

“The most improved thing I got is my confidence. Nothing physical, just my confidence mentally.” Reese said on Jan. 24, shortly after a strong performance against Illinois. “I feel like [I’m] adjusting well as a freshman … feeling like I’m able to play with those guys.”

As a big-man himself in his days at Kansas and in the NBA, Manning has understood the talent that comes with the Big Ten.

“It’s a physical league,” Manning said. “It’s a league that also is, in my opinion, underrated athletically, with the athleticism and the way that the players individually move.”

It was perhaps the same reason Turgeon brought in Ian Martinez as a sophomore transfer from Utah.

Martinez has been described by teammates as one of the most athletic players they’ve ever seen. Watch him in warmups, taking to the sky for a dunk, and his athleticism is clear.

But the Big Ten caught up with Martinez quick. His early-season performances left a lot to be desired.

“He’s always shown flashes of it. I think now it’s longer, sustained periods of it.” Manning said. “The biggest thing, to me, that Ian brings to our team is his athletic ability defensively.”

Martinez finally found a modicum of confidence and consistency down the stretch, with highlight-reel performances against Nebraska and Penn State. He showed presence at the guard position, both on offense and defense.

The Costa Rican had four steals in both of those games and created plenty of opportunities for his teammates.

“This conference, it is different from the conference that I was in last year,” Martinez said. “But, it’s still high competition at all times, and it just feels good to be around that environment.”

Since, Martinez shrank back to bumpy in performances. The kind of performances many of the Terps have shared this year that led them to a losing regular season for the first time since 1993.

However, things can change once the calendar flips to March.

The Terps will need to run the entire bracket in the Big Ten tournament to get themselves into March Madness, but a strong showing wouldn’t rule out an NIT bid.

Maryland is just like every other team, it wants to experience some March magic. The Terps have had glimpses of greatness. The cards may have been stacked against them at times, but all they can do is play with the team they have now.

Maryland’s “newbies” have a full slate of conference games under their belts. Now is the chance for them to make their mark and continue their postseason.