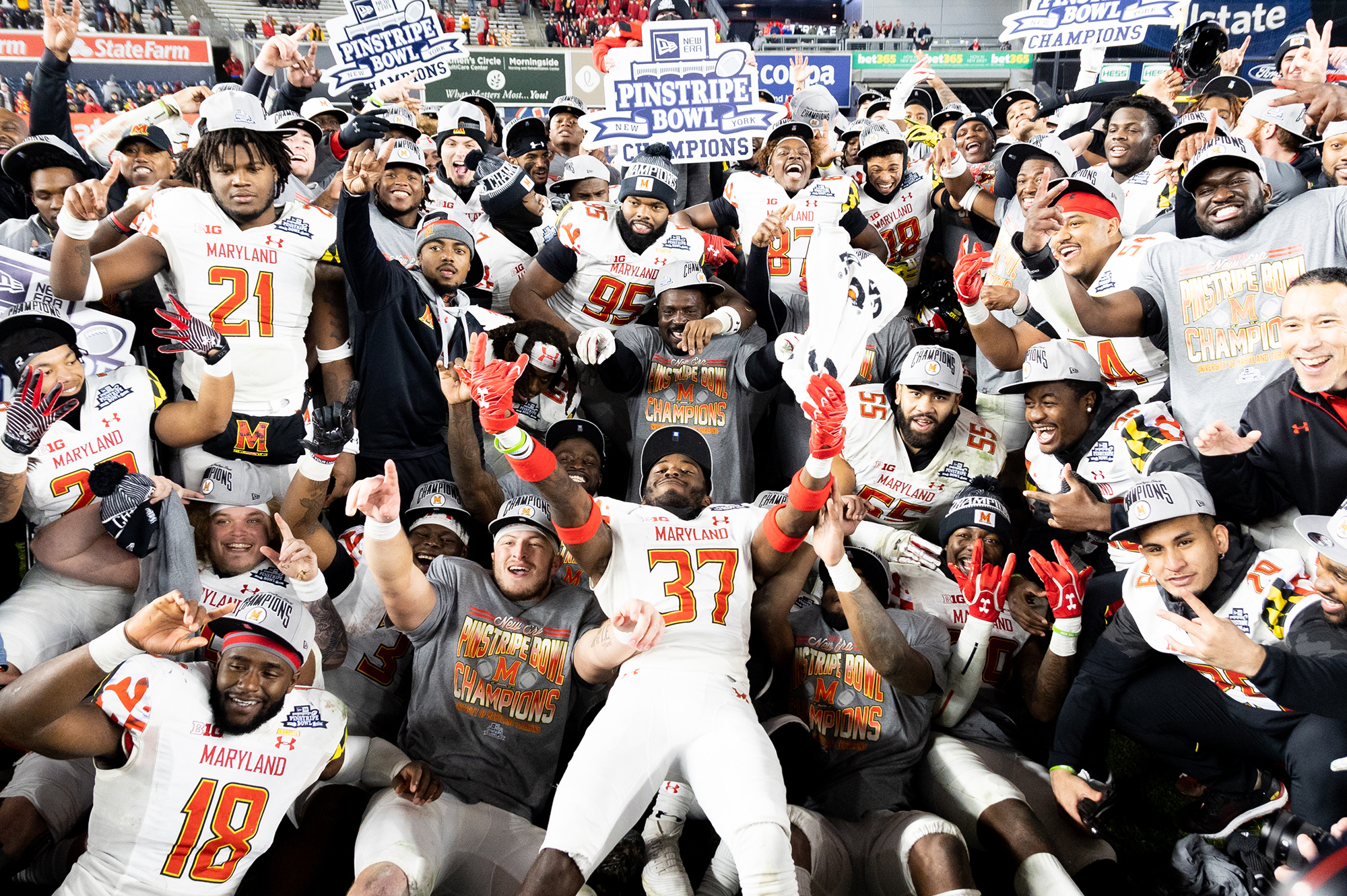 Maryland football catches Lavonte Gater as he falls back for a team photo following Maryland football’s 54-10 victory over Virginia Tech at the Pinstripe Bowl on Dec. 29, 2021. (Julia Nikhinson/The Diamondback)

Before Maryland kicked off its 2021 season, coach Mike Locksley said his team was “ready to take the next step” and show the college football world the Terps could be a force in a loaded Big Ten.

After 13 games and seven wins, Maryland did take that step forward, even with significant room to improve.

Those successes are now a baseline to build on in the coming years.

“This season was a huge step for our program, but I still believe, again, that the best is ahead,” Locksley said.

Much of Maryland’s improved play came thanks to a rejuvenated and sometimes prolific offense, helped by finally having a stable quarterback. Taulia Tagovailoa started every game under center and set numerous program records on the season: most passing yards in a single season (3,860), most completions (328) in a single season and highest single season completion percentage (69.2 percent), while he tied the mark for most passing touchdowns with 26.

His poise in leading the offense only grew as the season progressed, and he comfortably commanded the Terps’ final two wins, both blowouts that turned their season into a winning one.

“We’re just continuing to get better, and [Locksley] talked about this being the start of our next season, and so I feel like we gave people something to see,” Tagovailoa said. “We’re only going to get stronger, bigger, faster.”

While Tagovailoa still needs to iron out some turnover issues — he threw 11 picks this season, including an ugly five-interception night against Iowa — Maryland has its man at quarterback for at least one more year. And he has a deep group of wide receivers to help.

Dontay Demus Jr. was Tagovailoa’s top target for the first five games, racking up explosive play after explosive play as he tallied 507 yards and three touchdowns. But Demus’ senior campaign crashed to a halt when he suffered a knee injury on a kickoff return against the Hawkeyes.

Thus began the Terps’ rash of injuries in the wide receiver room, with both Jeshaun Jones and Marcus Fleming also needing lower body surgery. That meant a wily group of veterans and young stars had to step up and be targets for Tagovailoa.

“Luckily, that room is deep enough where there’s not a huge drop-off in terms of production. I feel like everybody that came in made plays,” Okonkwo said.

That talent carried the Terps throughout their 2021 campaign. With nine of its 11 expected starters set to return in 2022 — including Demus — Maryland seems poised to put up massive offensive numbers once more.

But those successes were hampered by inconsistent defensive play and injuries.

While the Terps’ defensive backs were largely sound through the season’s first five weeks, they quickly broke down against top competition. The unit was vastly overmatched against Ohio State, with quarterback C.J. Stroud and wideouts Chris Olave and Garrett Wilson picking them apart through the air for more than 400 yards and five touchdowns.

Maryland was down three of its top four cornerbacks for that game, but even when healthy, teams such as Penn State, Michigan State and Michigan knifed their way through the defensive backfield. Still, safeties Nick Cross and Jordan Mosley led the team in tackles, and cornerbacks Tarheeb Still and Jakorian Bennett combined to break up 24 passes.

The front seven continued this up-and-down play. Injuries ravaged the linebacker room, allowing for a weakness in the mid-level that opposing offenses repeatedly exploited. Yet, the interior line — led by NFL Draft hopeful Sam Okuayinonu — held up as easily the defense’s strongest group, combining for 16 sacks.

But all 11 tightened up when needed, allowing just two touchdowns to Rutgers to clinch a bowl berth before holding the Hokies to 10 points.

“If you just keep grinding and you stay true to what you are trying to do … you can still get a good positive end result,” Still said. “I feel like it is the next step for the program. Taking it to the next step is something this school hasn’t done in a long time.”

And that’s really the crux of the season.

No, the Terps were not perfect. But after several years of subpar production, getting back to mediocrity is a critical and necessary sign of progress for a program desperately searching for positives.

Now that Maryland has reached its initial goal of making and winning a bowl game, the Terps know they must continue building on this season. It won’t be easy in the Big Ten, but that’s what good teams do — take another step.