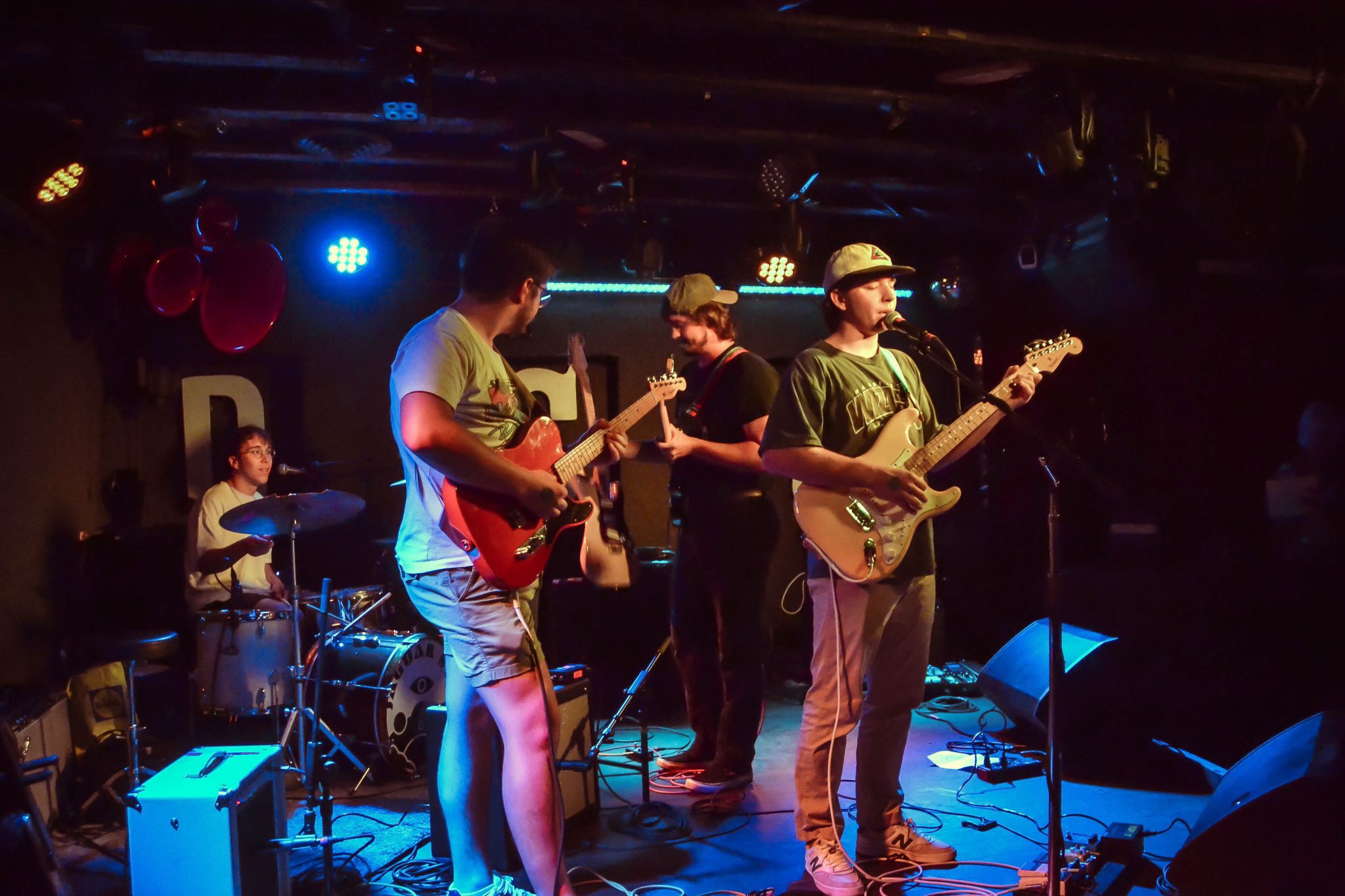 The second floor of DC9 Nightclub was dark on Sunday when Josh Poggioli and his band Skate Stance began getting ready for their set. Only dim blue lights hung over them, giving the musicians a mysterious quality to them.

It was an exciting night for Poggioli, a University of Maryland alum.

“I just can’t wait,” Poggioli said two days prior to the concert.

This was his band’s first performance since playing with Joy Again and Rebounder in May, as well as Poggioli’s first time performing his own music since graduating in the spring. He was offered the opportunity to open for dual headliner bands Jaguar Sun and Husbands at the last minute when DC9 reached out to him.

“What’s up everyone?” Poggioli said to the crowd.

The audience cheered. And without even introducing himself, Poggioli went straight into playing his guitar, singing the first song of the night.

It was about a year ago that Poggioli did a live performance at NextNOW Fest, his first since the peak of COVID-19. He remembered the nerve-wracking process of getting to campus on time after arriving late. With a guitar in one hand and an amp in the other, he arrived sweaty and tired only two minutes later than scheduled.

“If you mess up, it’s whatever,” Poggioli said. “If we want to try something new that night of the show, let’s do it … It’s not like a super rehearsed setup, kind of thing.”

He said this way of performing lets him enjoy the show.

Tyler Drager of The Dune Flowers, who saw Poggioli perform at DC9 in February, said he believes Poggioli’s onstage personality comes from a soulful place.

Poggioli also enjoys being relaxed on the stage because he likes to be conversational with his audience. He brought that energy to DC9 Sunday night when, in the middle of switching guitars between songs, he asked everyone to yell what they did that weekend.

“If I think about a show too much prior to it, then I get super stressed,” Poggioli said. “Why am I stressing this much over something that I love to do?”

Poggioli transitioned into playing a song called “Pretend It’s Raining,” one of three songs in the EP Stuck In My Head centered around his girlfriend Alyssa Ledbetter, a senior psychology major. She was among the many people there to see him perform.

Ledbetter has followed Poggioli to concerts, whether it was a Skate Stance performance or when he performed in drummer Jeff Gilman’s band, Jeff Draco, at Pie Shop in Washington, D.C., in 2021.

Most of Ledbetter’s favorite memories with Poggioli include all the different concerts he’s taken her to, she said. Dating him has opened her eyes to new music and different genres. She said she was glad to have met him at the University of Maryland.

“I love Maryland,” she said. “It’s a very significant part of our relationship.”

Poggioli said he has fond memories at the university because it was such a formative place for his music career. With the help of the Terrapin Record Label, he managed to turn Skate Stance into more than just an idea, he said. And it was through them that he met Gilman.

“My music taste has become so indie,” Poggioli said. “Jeff has been a big part of that.”

Poggioli and Gilman play in each other’s bands and used to live with each other during their sophomore year. Gilman himself described Poggioli as

“[Josh is] one of the best guys out there,” Gilman said.

Poggioli’s family also came to support. His brother Michael played the guitar on his right and his parents, Tim and Beth Poggioli, sat at a table in the audience.

His family got him into music in the first place. Poggioli and his brother learned how to play the guitar together and it was his father’s neverending collection of CDs that made a big impact on Poggioli’s appreciation for music.

Tim and Beth expressed how they were happy to see their sons perform. Poggioli’s performance seemed even more upbeat and powerful that night as the whole place vibrated with his music. Many people were tapping their feet or dancing along. Even one of the band members of the Husbands, Wil Norton, said it was an awesome sight to see.

“It was high energy,” he said. “Kind of chaotic and a good time overall.”

And after Poggioli had finished his entire set of eleven songs, what could have been the whole audience cheered for him.

When his opening act was over, Poggioli took his equipment off the stage and went straight for the green room. There, he reflected on the night and how through all the little things that went wrong he never felt nervous.

“It’s all part of the show,” Poggioli said. “You just gotta roll with the punches.”

“Can’t wait for the next one,” Poggioli said.