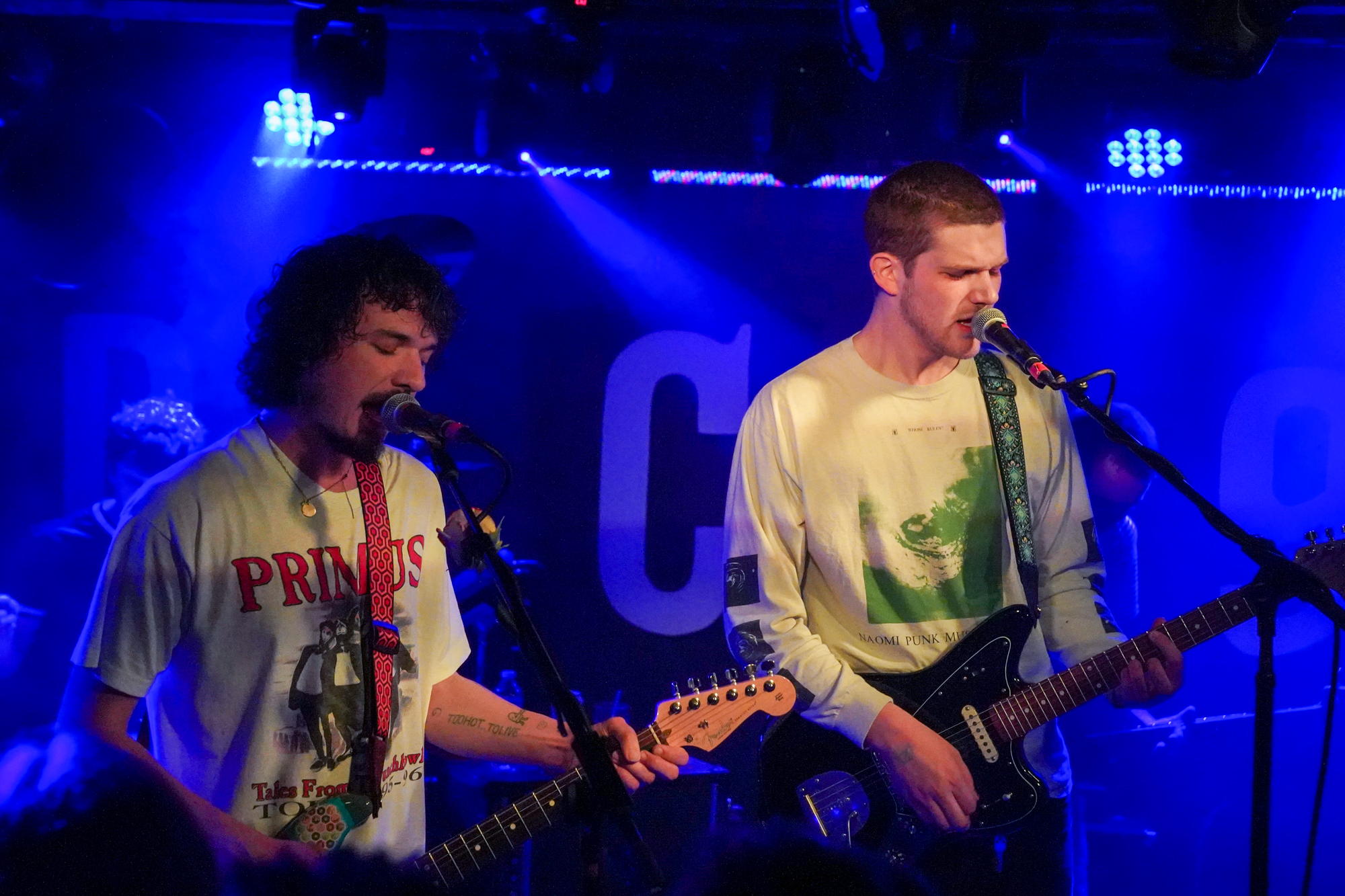 Joy Again concludes their spring tour at DC9 in Washington, D.C., on May 6, 2022. (Frances O'Connor/The Diamondback)

If you had walked into the front door of the bar in DC9 Nightclub Friday night, you would have no longer been able to hear the rain that poured outside. When asked for your ID and vaccination card, you would instead hear the distant sounds of singing and sticks hitting drums.

If you walked up the stairs to where the musicians perform, you would find a dense crowd with only inches between each person leaving barely any space to squeeze through. Hands would rise into the air, most of the time holding phones with thumbs pressed on the red record button. You could catch the faint glimmers of the band onstage behind e-cigarette vapor.

But even if you would not be able to reach the front of the crowd and be near the band, you’d still feel the music make your heart dance to the beat. Even from far away you could hear every note as if you were right beside them.

[What I learned as an out-of-state student at UMD]

Joy Again, along with opening bands Rebounder and Skate Stance, played to a crowd of dozens on the second floor of DC9. It was the kind of show that sold out and had so many people present that all the chairs and tables were removed to make space. I think that was fitting because I am not exaggerating when I say that the entire concert was a spectacular experience, even if I was stuck at the back of the crowd.

The first performers that night were local Washington, D.C., band Skate Stance. Led by University of Maryland senior communication major Josh Poggioli, this is a group I’ve been wanting to see play as a full band. I saw Poggioli perform his music before at NextNow Fest in September of last year and at DC9 for a Jeff Draco residency in February. Yet, both of these shows were times when Poggioli was onstage by himself with just his guitar.

So it brought me great joy when I arrived at DC9 to find Poggioli’s band playing his garage rock music in its full sound. The drums and two other guitars really made the songs come to life and had many people cheering. I especially enjoyed “The Middle” and “Nonna’s Camels.”

Next was the New York band Rebounder. I had never heard of this group before, but now I’ve fallen completely in love with their music. “Premium Fantasy” had a catchy chorus and youthful charm that had me dancing and their cover of Peter Bjorn and John’s “Young Folks” had me wishing there was a way to listen to it again.

Rebounder’s music was kind of similar to Skate Stance’s, with a great guitar sound and upbeat drums, though it was definitely more alternative than rock.

Last but not least was the headliner, Joy Again. By the time they stepped onto the stage the crowd became even denser. It seemed like a lot of people came for them. And for good reason, too.

Their performance was unforgettable.

What made their onstage presence was their interaction with the crowd. For their feel-good love song “Who Knows,” one of the band members pulled out bongos. Another band member asked for the crowd to scream whenever the bongos were played since the microphones would not pick them up.

There was also a time when they found a lost ID on the stage and asked if it belonged to anyone. When no one in the crowd claimed it, the band dedicated the next song for the person who lost their card. Then the crowd screamed.

The concert as a whole was great and I will probably spend the next few weeks obsessing over each band’s discography. It’s a shame that Rebounder and Joy Again are not local bands, since I would love to see them again. As for Skate Stance, those who missed the show will probably get a chance to see the band perform around the area again in the future. All of these bands are truly worth seeing in person.