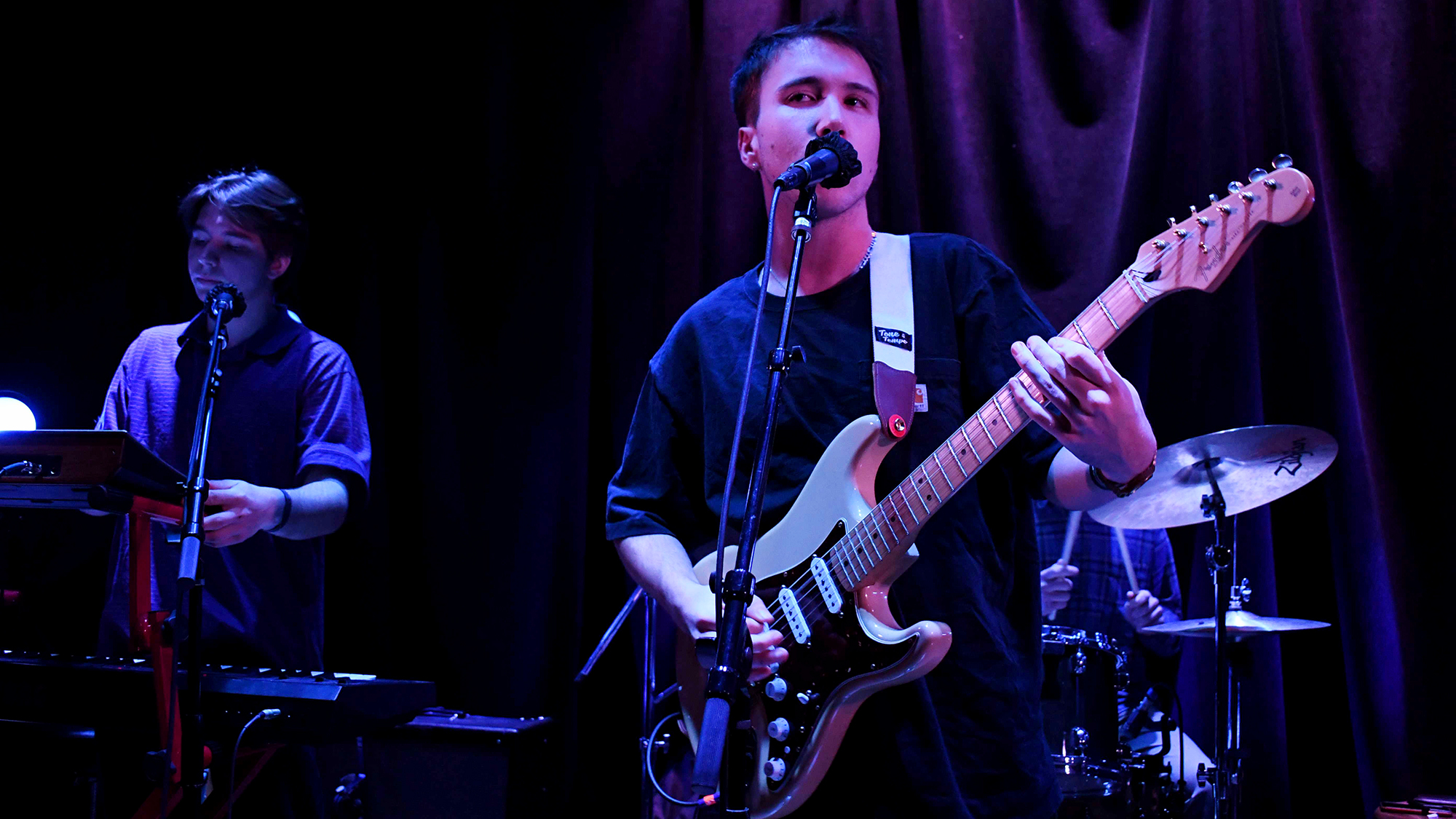 With a guitar in his hands and purple lights illuminating him, senior marketing major Jeff Gilman and his band performed on the second floor of Pie Shop in front of a large crowd. Gilman’s performance was lively as he sang, kicked and stomped to the beat. The audience matched his energy.

Gilman and Poggioli, both former roommates, local musicians and students at the University of Maryland, have been bringing their musical talent to Washington, D.C. Poggioli’s band, Skate Stance, performed at DC9 Nightclub on Friday, Nov. 5 and Gilman performed at Pie Shop on Tuesday, Nov. 9 under the stage name “Jeff Draco.”

Though Gilman usually describes the music associated with Jeff Draco as dream pop, he said it’s more complicated than that. There’s a mix of indie rock as well, he said. According to his description on Spotify, Gilman takes inspiration from musicians such as Gus Dapperton, The Cure and Dayglow.

The sound of Jeff Draco has evolved over time, changing from being more lo-fi with guitars, drums, bass and the occasional keyboard to something with more synths and rock influences. However, Gilman said there are aspects of his music which remain consistent.

“I have a pretty signature guitar sound,” he said.

Gilman’s most recent song, “Dreamgirl,” has found quick success since its release in June. On Oct. 30, Gilman thanked his listeners on his Instagram story for 40,000 streams. There are now over 47,000 streams of the song on Spotify.

When it comes to Skate Stance, Poggioli said the sound is a lot of everything. It’s mostly garage rock with a mix of indie folk, but he also experiments with dream pop and soft punk.

Skate Stance has three members, including Poggioli, Gilman and American University student Roberto Capoccia. Poggioli chose the name Skate Stance in his freshman year when he joined the Terrapin Record Label. He was getting into skateboarding at the time and someone asked him what his skate stance was. After replying that he rides with a regular stance, he was inspired by the question to name his band.

Poggioli has performed live twice during this year. The first was on Sept. 17 at the NextNow Fest, which was a solo performance for him.

[Review: ‘Julia’ captures ‘the French chef’ in all her glory]

For a solo act, Poggioli said he likes to keep it very informal because he wants to connect with  his audience and be conversational.

“It’s kind of loose,” he said. “I’ll switch up some lyrics just because I forget them.”

Skate Stance performed as a full band on Nov. 5 at DC9 Nightclub in D.C., opening for the bands GLOSSER and main headliner Daddy’s Beemer. Poggioli said the performance was more lively with a full band — they were even able to get people moving.

“Jeff and Roberto really shined in the live aspect,” he said.

Alyssa Ledbetter, a junior psychology major and Poggioli’s girlfriend, was at the performance at DC9 Nightclub. “I had never seen him and his whole band perform, so it was really nice to see that,” she said.

George Turner, the bassist for Gilman’s live band, was also there. The turnout for the performance was huge, he said.

“A partial credit to Daddy’s Beemer for being there,” he said. “I think most of the crowd was there for Skate Stance because Skate Stance is so good.”

Gilman has performed several times during the year, including performances at Pearl Street Warehouse, DC9 Nightclub, Songbyrd Music House and the recent concert at Pie Shop. Gilman said that his shows were always energetic prior to the pandemic, but he’s noticed a change in his audience. They seemed to be even more energetic than before, as though they’ve been waiting to get out of their houses. In the past, there were a few people who would sing along to his songs. Now, it seems like it’s almost everyone.

“Hopefully that will be a trend that continues and increases,” Gilman said.

The recent concert, which included performances from Austin Weber and The Dune Flowers, was the first time Gilman or Poggioli have ever performed at Pie Shop. Poggioli expressed excitement for one particular aspect of the venue a day before the performance.

“I hear they have really good pie,” he said. “I’ll definitely be getting one tomorrow.”

Poggioli ended up buying two pies the night of his performance, one of which he happily shared with Ledbetter. He also said he liked the venue’s environment and that it was located in a good part of D.C.

“This place is awesome,” he said. “I definitely want to come back and see some bands here.”

Among the crowd at Pie Shop were some people who were already familiar with Gilman’s music. Kourtney Lammey, a nursing alumna from Belmont University and the fiance of Tyler Drager from The Dune Flowers, said she’s been listening to Gilman’s work since she was a junior in high school. Her favorite aspect of his music is its universality since anyone can relate to it.

“Whether it’s the first time [or] the twentieth time, you’re moved by it,” she said. “Jeff’s music is just truly inspirational.”

There were also people at Pie Shop who had never heard of Jeff Draco and are now fans. Wynne Gallahan was one of these people.

“I’m definitely going to go home and listen to his music,” she said.

Following their recent performances, Gilman and Poggioli both announced Nov. 10 that they have new releases coming soon.