Review: ‘Red (Taylor’s Version)’ is here, and I’m not fine at all 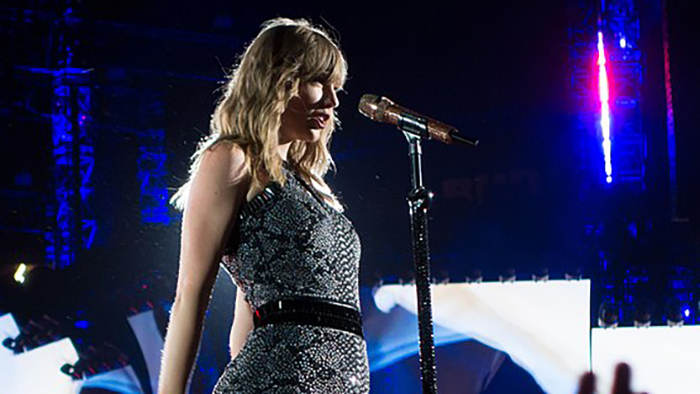 When the clock struck midnight on Nov. 12, I enthusiastically hit play on Taylor Swift’s new album Red (Taylor’s Version) which is a re-recording of her 2012 album, Red.

I had no idea I could get goosebumps for 2 hours and 10 minutes straight.

The musical genius has taken back what’s hers and made it even better. From the engrossing musical production and lyrics, to the featured artists, unreleased pieces and complimentary short film, this is beyond an album. It’s a comprehensive work of art. The re-recorded songs were like bringing 2012 Taylor back to life and meshing it with the matured version of her.

In a way, as she relives her albums, we do too. As I listen to Taylor’s Version of songs such as “Red” and “Begin Again,” I’m immediately taken back to who I was when I first heard those songs. I can imagine that many fans find themselves in similar terrain.

I distinctly remember her hit “Red” being louder and more forceful in this album. And the percussion of “Girl At Home” was modernized with great intensity.

The most exciting part of listening to the album is discovering the “new” songs. We have a combination of “vault songs,” which are songs that didn’t end up making the 2012 album; and other songs that were released before but weren’t part of Red in 2012.

Here are a few of the album’s golden nuggets:

“All Too Well (10 Minute Version)(Taylor’s Version)(From the Vault)” & All Too Well: The Short Film

Words cannot describe how wonderfully crafted this song is. When the short version came out in 2012, it was already a fan favorite. I would play this on repeat.

I remember how the song ended, I was always left craving more. And that’s what she gave us. Swift explained in “The Tonight Show Starring Jimmy Fallon” that the 10-minute version is the original song with the original lyrics. Since a 10-minute song is unusual, she had to cut it down before releasing it back in 2012.

The story of the song, which is about a short-lived relationship, was already quite vivid. You had the scarf that she left in his sister’s house, a drive-by fall foliage, all these details about her ex’s upbringing. The short version gave more of a “right person, wrong time” vibe.

Now, the original lyrics reveal “deleted scenes” from this electric love story. And now it gets you thinking, huh, this guy is kind of a jerk. How could he stand her up on her 21st birthday? How rude!

There is speculation about who this song could be about (most fans think Jake Gyllenhaal), but no matter who it is, the guy is clearly older than her. Swift doesn’t hold back in what she has to say in the original. She is brutally sincere as she sings: “And I was never good at telling jokes, But the punchline goes: ‘I’ll get older, but your lovers stay my age.’”

The instruments were gradually incorporated in a graceful transition — I felt like I was in a movie. The strength and volume aligned with the highs and lows of the lyrics.

The short film was exhilarating. The scenery painted the song to a T. And, the actors who portrayed the relationship, Dylan O’Brien and Sadie Sink, did an incredible job. Not to mention, Swift did an amazing job directing, adding other talents to her repertoire.

The scenes were candid and intimate, it felt so real, almost like I wasn’t supposed to be watching them. The chemistry between them was spot on and Swift said a lot of the acting was improvised, providing an even more natural feel.

With such a lucid song and captivating film, it’s hard not to become enthralled by this multimedia story.

Similar to the Swift-Sheeran collab “Everything Has Changed,” this song is a glowing love song about falling for someone. The gentle guitar and youthful, poppy shift in vocal notes in the pre-chorus leaves anyone dewy-eyed.

The romantic getaway song is about being into someone to the point that all you need is them. The lyrics are about running from all the noise and escaping together on a whim to somewhere new.

One of the best quarter-life crisis songs I have ever heard, Swift collaborates with rising indie-pop star Phoebe Bridgers. This melancholic melody reflects the fear of growing up.

Bridgers gets a solo like most of the featured artists on the album, which is a great improvement from other albums where features would only get to sing background vocals.

The lyrics sung are pensive and conversational. It’s full of open-ended questions as it represents a new chapter in life, and one can barely guess what will happen next.

“How can a person know everything at 18/ But nothing at 22? / And will you still want me when I’m nothing new?”

This entrancing ballad with muted trumpets is a masterpiece. Taylor sings about the constant uneasiness she feels as she goes through miscommunications in her relationship. She also delves into the mental health struggles that her partner faces. The content is deep yet the melody isn’t too slow. She isn’t giving up on him.

The song is a good kind of nostalgic as it’s about fondly remembering a past romance. Swift sings wishing she could go to the “very first night” that they were together. The fast, pop melody instantly brings you back to simpler times.

“I Bet You Think About Me (feat. Chris Stapleton)”

This catchy country song is dedicated to “Mr. Superior Thinkin’” a.k.a. an ex who left for superficial reasons. However, she shuts him down with witty and wise words, basically saying it’s his loss.

This is probably one of my favorite songs on the album. The percussion is strong with attitude. However, the guitar strums and piano are calm enough to relay closure, as she proclaims she is past his nonsense. And the occasional harmonica throughout the song is *chef’s kiss.*

Stapleton’s feature was a great idea as he is the king of country music. His voice commingled Swift’s “Old Taylor” style in such a satisfying way.

Stapleton doesn’t have a solo in this song, and I wish he did. However, his voice is so unmistakable and full that his presence was fully felt.

Although the piece isn’t technically from “The Vault,” it wasn’t part of the Red album until Taylor’s Version came out. This re-recording needs to be highlighted because it is one of Swift’s most heart-wrenching songs of all time.

The song is about a boy named Ronan, who died of neuroblastoma, a type of cancer that affects nerve tissue, before his fourth birthday. Swift wrote about it after reading the heartfelt blog of Ronan’s mother.

The lyrics are tender and painful, encapsulating the grief of Ronan’s family and giving a voice to families going through similar situations.

I know there are other amazing artists that released music on Nov. 12 that I need to listen to, such as Bruno Mars. But I can’t get myself to stop listening to this album. I’m sorry. I’m hooked. And I’m not sure when I will recover.