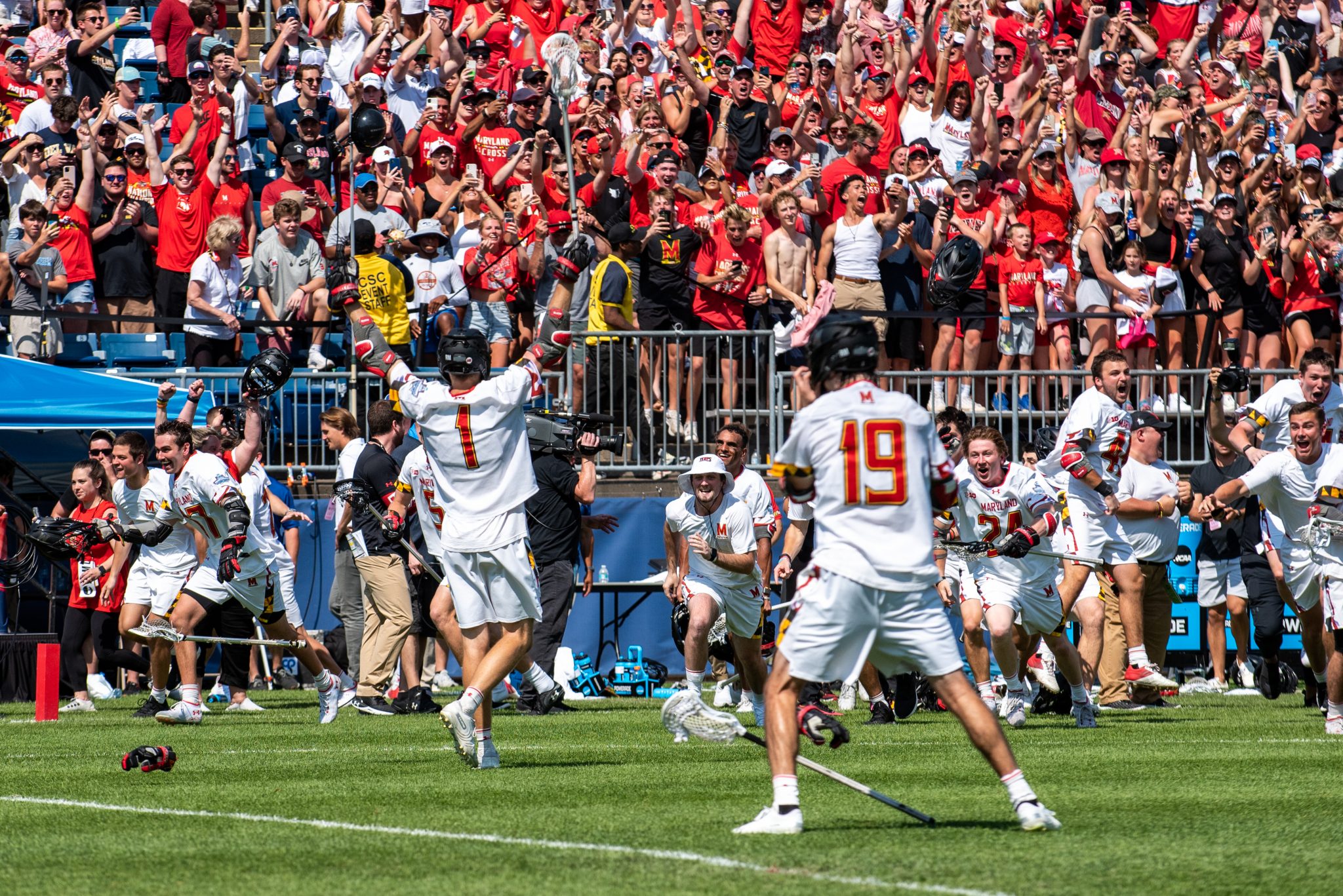 Lacrosse sticks and helmets flew into the air as the buzzer sounded. They fell to the ground as the horn’s sound faded, littering the turf of Rentschler Field in East Hartford, Connecticut.

Players were scattered across the grass.

Some roamed around embracing their teammates while some cut the nets off of goals. Others climbed up into the crowd, standing among a group of fans who witnessed a season that ranks among the best in lacrosse history.

Maryland men’s lacrosse became the first team to finish an undefeated season with a record of 18-0 or better, besting Virginia’s 17-0 run to a national championship in 2006.

The Terps consistently battered opponents, finishing the season with an average margin of victory of 8.67 goals — one of the top 10 best scoring margins in NCAA history, trailing Syracuse’s legendary 1990 squad and three of Richie Moran’s Cornell teams during the 1970s.

“​​In the heat of it, I didn’t really realize we had won 18 games,” coach John Tillman said.

The fifth-year senior broke the Terps’ career and single-season points records in his final collegiate season. Wisnauskas averaged 5.72 points per game in 2022, finishing his Maryland career with 340 points and the season with 103.

While Tillman didn’t believe a player could match what Jared Bernhardt had done in 2021 — preparing for a more balanced approach on offense before the season began — Wisnauskas surpassed his predecessor in a host of areas.

He became the Terps’ second straight Tewaaraton Award winner and surpassed both the career and single-season points records Bernhardt had set just a year prior.

Wisnauskas was supported in attack by a pair of transfers and the returning Eric Malever. Keegan Khan and Owen Murphy proved to be smart additions by Tillman, scoring the second and third most goals on the team, respectively.

Khan finished his only season at Maryland with 35 goals and 28 assists. Murphy only notched five assists on the year but bagged 34 goals. The sharpshooter will have the opportunity to take on a larger role next season after shifting between midfield and attack throughout the 2022 campaign.

Anthony DeMaio, the only player remaining from Maryland’s 2017 title team, scored 17 postseason goals that were crucial in the Terps’ run to Big Ten tournament and national tournament titles. His pairing with Kyle Long and transfer Jonathan Donville gave opposing defenses fits as teams struggled to cope with all six players on Maryland’s offense.

The Terps’ second midfield line — including Jack Koras and Jack Brennan — will look to step into starting roles after impressing throughout the season.

Koras’ instinct on cuts helped Maryland convert during hung-up situations, while Brennan notched at least one point in each of the Terps’ last nine games.

Luke Wierman’s historic output at the faceoff X provided Maryland’s talented offense with plenty of scoring opportunities. The junior shattered records for both faceoffs won and taken, finishing the season with 298 and 451, respectively.

The Terps broke the NCAA record for assists in a single season with Wisnauskas’ feed to Donville, their 204th of the year.

“[It’s] just a reflection of how unselfish this group was,” Tillman said. “[It’s] hard to describe our team in one word, but one word that just always comes up but this group was ‘selfless,’ in so many ways.”

That goal put Tillman’s squad up 9-2 but following the score, its offense suddenly dried up. Maryland failed to score for the remaining 26 minutes as the exhaustion of championship weekend wore it down.

All the pressure fell onto the Terps’ defense — a squad that had impressed all season.

Sophomore Ajax Zappitello slotted seamlessly into a unit that included Brett Makar and Matt Rahill. Paired with defensive midfielders such as Roman Puglise, Alex Smith and Bubba Fairman, the Terps’ defense held opponents to an average of just nine goals per game.

Faced with its biggest task yet, the defense would hold its own against a hard-charging Cornell attack.

The Big Red scored one goal in the third quarter before notching three in the first half of the final frame. Cornell made it 9-6, but even as the exasperated Terps failed multiple clears, they gave their opponents little room to create chances.

Cornell only scored once more, and the Terps ran out the clock. As those sticks and helmets flew toward the sky, almost every Maryland player ran to goalkeeper Logan McNaney. The junior notched 17 saves in the championship game after a career-high 19 in the Terps’ semifinal victory over Princeton.

His heroics in net were rewarded as he was named the most outstanding player of championship weekend, capping off a season in which he made 200 saves.

The Terps’ celebrations differed immensely from the disappointment they suffered at Rentschler Field a year ago.

While only tears of despair fell from Maryland players after falling just one goal short of an undefeated national championship in its title loss to Virginia, the only tears that fell from white-jerseyed bodies on Memorial Day this season were ones of joy.

The Terps failed to show any weaknesses throughout the entire year while running the gauntlet in 2022, redeeming their heartbreaking loss with one of the greatest seasons in the history of college lacrosse and a national championship.

“Whether people want to say we’re the best team ever or not — I mean, we’re national champions, and that’s all that matters,” DeMaio said.