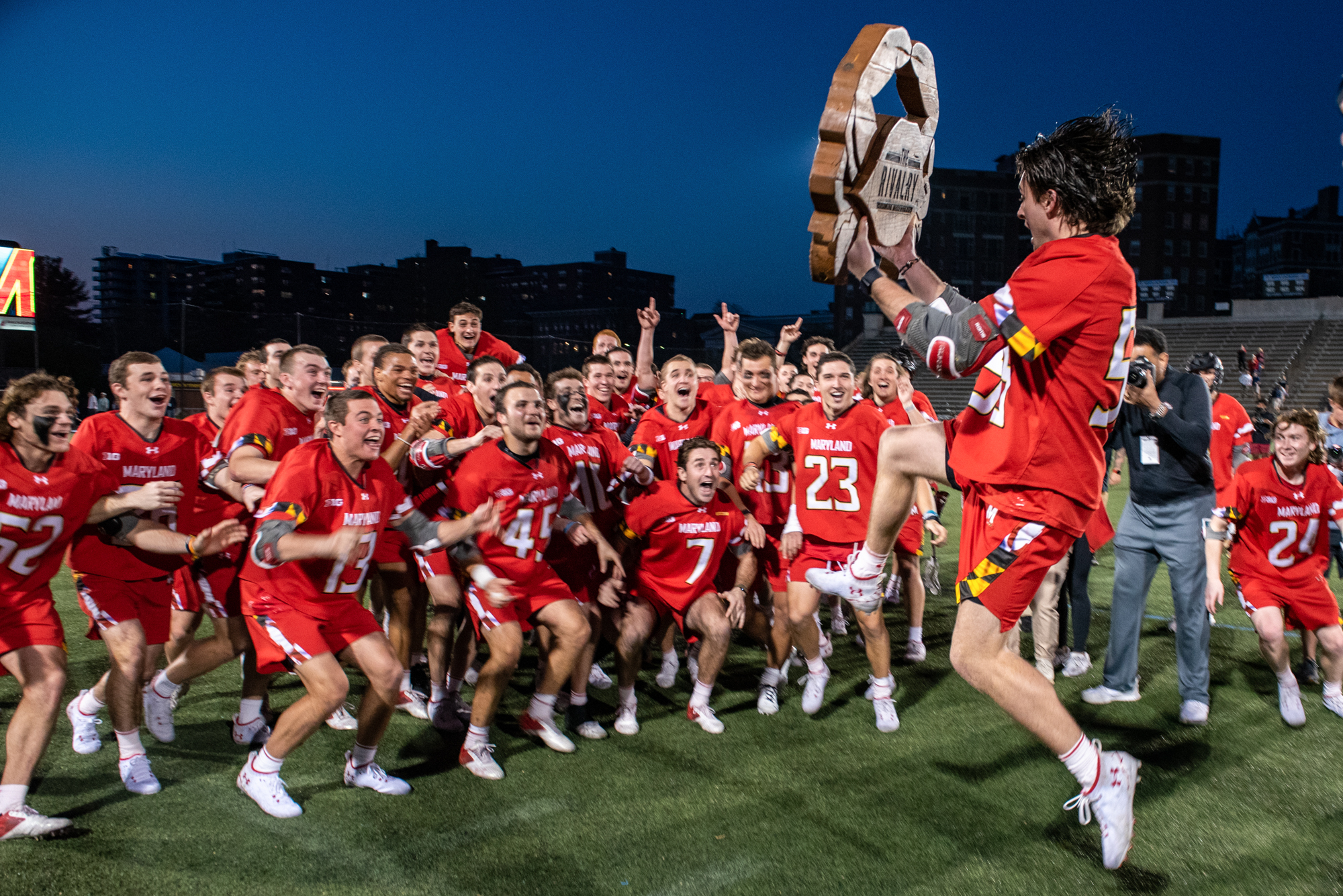 Owen Murphy grabbed the crab-shaped trophy awarded to the victors of the rivalry between Maryland men’s lacrosse and Johns Hopkins and ran over to his teammates. The attacker hoisted it toward the sky as he and his teammates celebrated a 22-7 thrashing of Johns Hopkins.

The Terps tallied a historic win, running roughshod over the Blue Jays and handing them their largest defeat in program history.

A win of that margin in one of the biggest rivalries in college lacrosse makes for a special moment. Against his former team, the decisive win was even sweeter for Murphy, who played his freshman season with the Blue Jays.

The attacker totaled the second-most points for Johns Hopkins in 2020 with 13 points in six games, but entered the transfer portal ahead of the 2021 season. He committed to Maryland during the summer of 2021.

“I know how much it meant to him just because of last year,” attacker Eric Malever said. “He’s such a great player for us. He had a great game and it was so awesome to see how excited he was to lift that crab up for us.”

Coming into the game, coach John Tillman was nervous about how Murphy would handle facing his former team. The attacker wasted no time getting in on the action, scoring just 78 seconds into the game.

Murphy then forced a turnover on a Maryland ride, and Keegan Khan scooped up the ground ball before returning it to the sophomore. He unleashed a bouncing shot that found the back of the net to tally his second goal of the day in the second quarter.

Murphy added a feed to Logan Wisnauskas and two third-quarter finishes to contribute a total of four goals and an assist to Maryland’s rout of his former team, quelling any of Tillman’s fears before the game.

“I was really worried. I kept saying like, ‘Okay, let’s make sure we breathe,’” Tillman said. “You know, obviously he has spent some time here, so there’s always emotions and things like that. I was a little worried he would be emotional.”

Tillman has relied on Murphy’s versatility all season, as the transfer has fit into different slots in the Terps’ attack or midfield and thrived regardless. The ability to play multiple positions has been something Tillman has stressed throughout the year.

“The value is being a flexible part,” Tillman said in March. “So if you can be a guy that can play attack or midfield, or you can play midfield offensively or defensively, you’re really valuable.”

Recently, Murphy has featured more heavily in the attack as one of many goalscoring options for the Terps. He’s notched 10 goals and an assist in Maryland’s last four games.

Against the Blue Jays, the sophomore showed his offensive prowess, scoring four times on five shots on target as he and the Terps pummeled both Johns Hopkins goalkeepers.

“He shoots the ball very well, and he got some good looks,” Tillman said. “I thought he did a really good job of changing up the shots and his release points, putting the ball in different spots.”

Dotting the net throughout the night, the attacker showed his former team what they were missing as Murphy left triumphant in his return to Homewood Field.