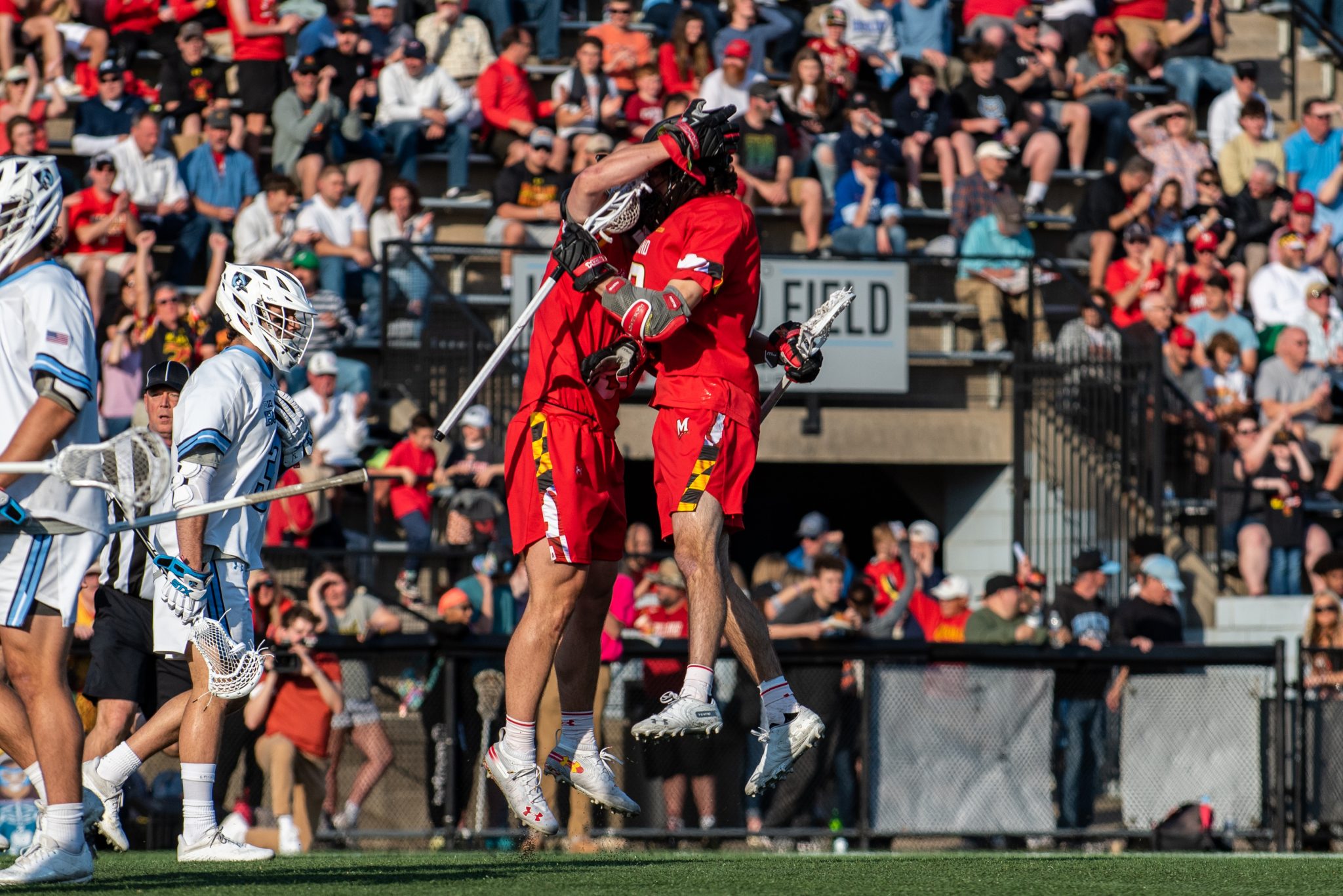 BALTIMORE — Logan Wisnauskas scooped up a ground ball and threaded a pass to Anthony DeMaio, who unleashed a shot past the Johns Hopkins goalkeeper.

Luke Wierman won the following faceoff and the Terps moved the ball beautifully, as the faceoff specialist found Murphy who quickly shoveled a pass to Wisnauskas. The attacker ripped another shot that found the back of the net just six seconds after DeMaio’s tally.

Maryland wasn’t done, as Wierman picked up another faceoff and charged straight down the field before scoring himself — the Terps’ third goal in just 10 seconds.

Maryland men’s lacrosse never struggled to find the back of the net against Johns Hopkins, inflicting the largest loss in the Blue Jays’ history in a 22-7 drubbing.

The win completed the Terps’ second-straight perfect regular season as they improved to 12-0. Maryland will be the No. 1 seed in the upcoming Big Ten tournament.

Kyle Long zipped through multiple defenders to get to the face of the net and placed a shot past Johns Hopkins goalkeeper Josh Kirson to give the Terps the lead just 29 seconds into the game.

Owen Murphy followed up with a goal against his former team before a Roman Puglise rip in transition made it 3-0 to Maryland under three minutes into the game.

Keegan Khan scooped a ground ball into the net for the Terps’ fourth goal of the game before Connor DeSimone notched a goal for the Blue Jays on a man-up opportunity, breaking up a 4-0 Maryland run.

DeMaio wrapped around and ripped a shot into the back of the net to get the Terps back on the board. Koras caught a pass and unleashed a shot that careened past Kirson, before Khan and Murphy both added their second goals of the game.

Johns Hopkins was able to keep Maryland quiet for a six-minute stretch and grabbed two goals of its own to cut the Terps’ lead to two. However, three goals in ten seconds extended Maryland’s lead to eight.

Joey Epstein grabbed a goal for the Blue Jays before Wisnauskas ended the half with a jumping shot to give the Terps an 11-4 lead at halftime.

Whenever the Blue Jays got a rare look on offense, Logan McNaney was able to make stops. The junior finished the opening half with 10 saves.

“Once you make those first couple saves and kind of get a feel for the scenery of the field you kind of get in a rhythm,” McNaney said.

After falling behind to Johns Hopkins in the fourth quarter twice last season, Tillman emphasized the importance of a strong second half despite the Terps’ comfortable lead.

Maryland was able to start the second half as it did the first and didn’t relent as the Terps unloaded on the Blue Jays in the third quarter, outscoring Johns Hopkins 10-0.

“For us, it was like let’s start the third quarter, you know, win the first five minutes,” coach John Tillman said. “Certainly didn’t expect it to go as well as it did … but to kind of get a couple early was huge.”

Eric Malever opened the second-half scoring before Wisnauskas and Murphy both notched their hat tricks.

Wisnauskas added another before Kyle Long showed off his speed, racing past his defender and finding the back of the net to make it 17-4.

Another Murphy goal was followed by Jonathan Donville’s first goal of the game as the midfielder was able to beat Blue Jays goalkeeper Tim Marcille at the near post.

Two Khan goals sandwiched Wisnauskas’ fifth finish of the game to end a third quarter in which the Terps looked unstoppable. Maryland scored 10 goals on 12 shots on target and won eight of 11 faceoffs in the quarter.

Jonathan Peshko ended a 23-minute scoring drought for the Blue Jays in the fourth quarter as Maryland began to put in players usually deeper on the bench. Garrett Degnon and Alexander Mabbett added another two consolation goals for Johns Hopkins.

The Blue Jays were only able to muster seven goals throughout the game after nabbing three in the final quarter, their joint-lowest total of the season.

“We had to start off strong and keep the same pace throughout the whole game, and the defenders did a great job of giving me shots that I can see,” McNaney said.

Although the Terps didn’t score in the final quarter, their offensive dominance shined throughout the game as they scored 20 goals for the sixth time this season, the most Maryland has notched in program history.