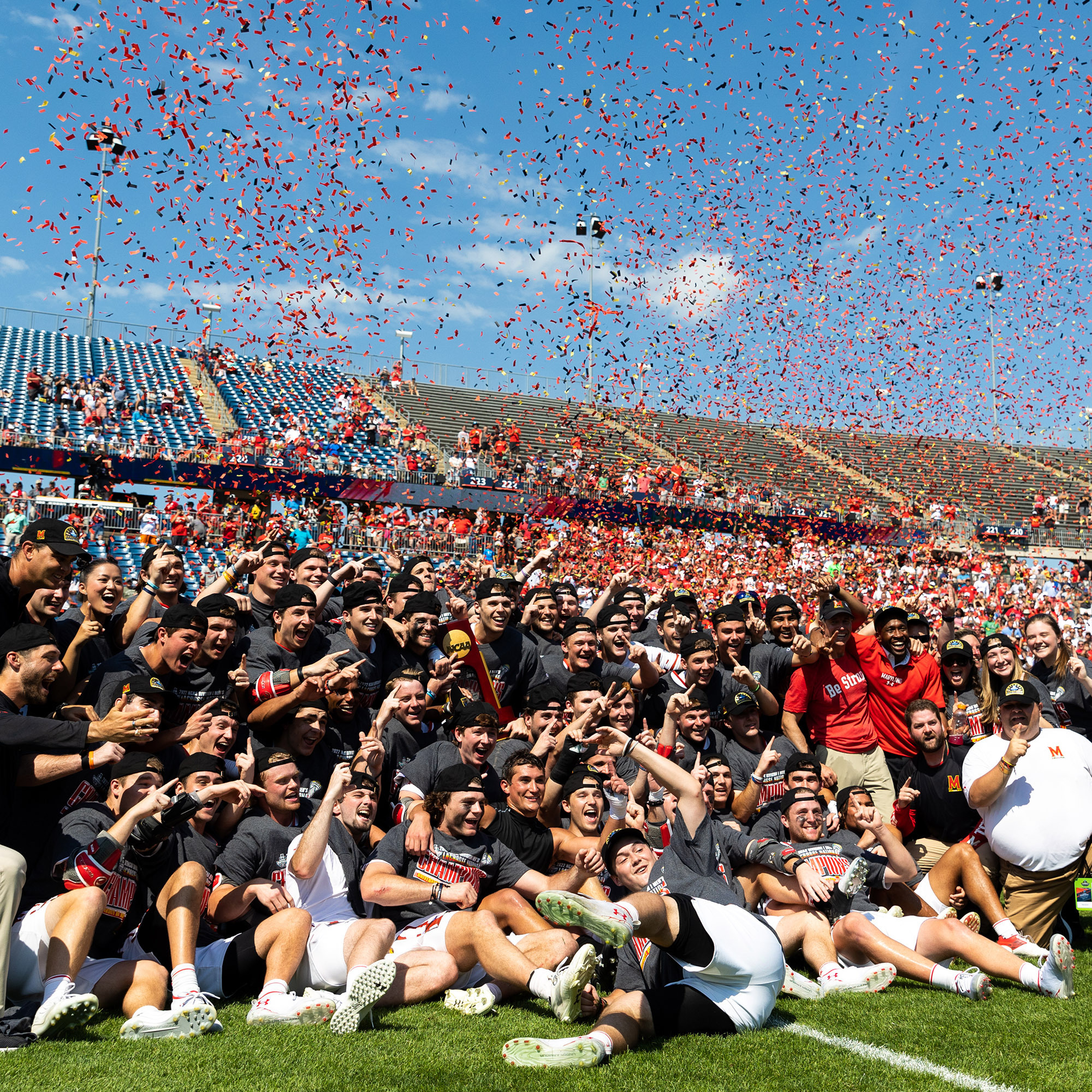 Maryland men’s lacrosse celebrates after winning the 2022 NCAA National Championship with a 9-7 win over Cornell on May 30, 2022. (Julia Nikhinson/The Diamondback)

After missing a chance to tie the game in the waning seconds of last season’s national championship, players crumpled onto the field and cried after falling just one goal short.

This year the Terps’ tears came in celebration, rushing the field as the final buzzer sounded. The tears were well-deserved as Maryland secured its fourth national championship Monday with a 9-7 victory over Cornell on the same field where they suffered last year’s defeat.

The win helped the Terps complete a perfect season with an 18-0 record and a national championship. They are the first undefeated NCAA champion since Virginia marched its way to the title in 2006.

Monday’s contest marked the first time Maryland scored under 10 goals as the nation’s best offense struggled. But the Terps’ relied on their defense to complete a perfect season.

Sophomore Ajax Zappitello shined on the biggest stage. After holding Connor Shellenberger pointless for the first time in his career in Maryland’s quarterfinal victory over the Cavaliers, the defender held the Big Red’s third top scorer, Michael Long, to just one goal.

He paired with Matt Rahill — who limited Cornell’s leading goalscorer John Piatelli to a single strike — and Brett Makar to help stymie the Big Red attack, holding them to their lowest scoring performance all season. Makar fell to the ground crying tears of elation at the game’s end as his teammates rushed by.

After celebrations progressed and the team dumped Gatorade on Tillman, the senior met his coach and hoisted him into the air.

“Are you kidding me, coach!” Makar shouted.

The two held a long embrace afterward as other players cut snippets of the net from the goal.

The Terps celebrated avenging last year’s title heartbreak with those pieces of polyester tucked under their championship caps, caps earned in part due to Anthony DeMaio’s offensive contribution.

DeMaio — the only player remaining on the Terps’ roster from its 2017 national championship team — took charge in the first quarter, dotting the net with a trio of first-quarter finishes to get Maryland out to an early lead.

After failing to register a hat trick in the regular season, the fifth-year midfielder scored three or more goals in all but one postseason game.

“It can be anyone at any point, and that’s just the selflessness of this team,” DeMaio said. “That’s kind of how we got here and we kind of fell back on that first and second quarter.”

Owen Prybylski scored his first goal of the season and Logan Wisnauskas capped off his Maryland career with two goals to extend the Terps’ lead to 8-2 just after halftime.

However, Maryland’s offense dried up as Cornell surged closer.

Donville’s goal with 11:55 left in the third quarter would be the Terps’ last tally of the game. The offensive struggles broke a 41-game streak of scoring double-digit goals.

The Big Red outscored Maryland 4-0 in the final frame and had chances to claw closer. But they were stonewalled by Logan McNaney — who notched 17 total saves and won the most outstanding player of the tournament award — even as Tillman’s squad struggled with turnovers and clearing.

“We just kept adding so many turnovers and again, I think Cornell deserves a lot of credit for being disruptive,” Tillman said. “We just weren’t as good as we had been … We just needed to lean on that defense and Logan [McNaney] and just kind of hang on.”

Piatelli scored his lone goal with 36 seconds left but Luke Wierman won the ensuing faceoff. A year ago, with his team losing late, Wierman had to fire a rushed shot that capped off the national championship loss.

But this year, the faceoff specialist only had to calmly pass the ball off as Maryland held the ball for the final seconds of the game and streamed onto the field as the final buzzer sounded.

The Terps dogpiled McNaney for his heroics and then celebrated the end of a historic season and a national championship in front of a raucous group of traveling fans.

“Just growing up and seeing all the other teams do what they did and going out there and doing it ourselves is pretty special,” McNaney said.