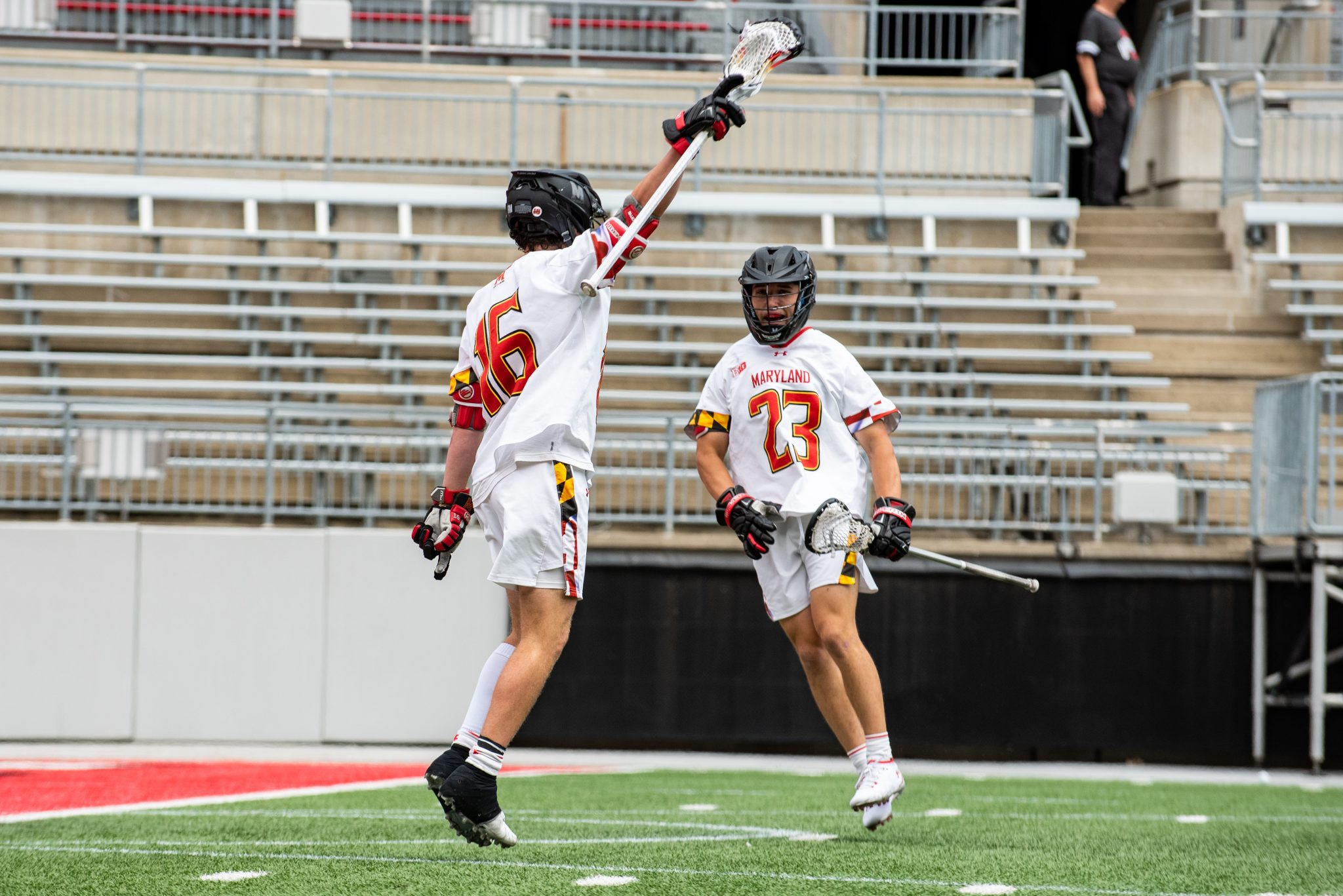 COLUMBUS, Ohio — After Maryland men’s lacrosse’s slowest start to the season, Anthony DeMaio popped up with a rip into the top corner to tie the game up halfway through the first quarter.

The midfielder added a second goal before notching his third as another low shot skipped past the goalkeeper to cap off the first quarter.

DeMaio’s first-quarter hat trick helped the Terps get out to an early lead they would never come close to surrendering.

“I think that every day we just get motivated by [last year’s national championship loss] in general, but we’re just happy to have another week together,” Luke Wierman said.

The Terps will now take on Princeton in the NCAA semifinal on Saturday in East Hartford, Connecticut.

While DeMaio couldn’t continue his hot start, his early hat trick helped the Terps get out to a 4-1 first-quarter lead.

Maryland relied on scoring from its midfield trio as both team’s attackers struggled in the first half. Brett Makar shut down Matt Moore, who shot 0-for-6 through the first 30 minutes.

Payton Cormier was the only Cavalier attacker to score in the first half, as the Terps limited Moore and Connor Shellenberger.

Shellenberger scored eight points in Virginia’s second-round victory over Brown, but on Sunday Ajax Zappitello held the redshirt sophomore without a point through the entire game for the first time in the attacker’s career.

“Scout [team] gave us a great look all week,” Zappitello said. “Ryan Siracusa just [gave] us great looks constantly, you know, kind of mimicking what they do in that fast-paced offense, which really helped us.

Eric Malever, Owen Murphy and Daniel Maltz were the only Maryland attackers to find the back of the net in the first half, as the Terps held a 9-4 lead at halftime.

Logan Wisnauskas went scoreless and could only muster two assists in the opening half, but opened the second half scoring as John Geppert found him in transition for a simple finish. The attacker quickly added another, growing the Terps’ lead to seven.

Murphy notched a hat trick, two goals of which came from assists by Wierman following faceoff wins. The faceoff specialist was dominant at the X, going 20-for-29.

“You look at Wierman, what he’s done at the faceoff X all season, and not only winning possessions, but pushing transition [and] finding Owen Murphy on that point,” Virginia coach Lars Tiffany said. “You’re sort of stuck as a defensive coach.”

The Cavaliers couldn’t find any momentum throughout the matchup, as their only run during the game came on back-to-back goals at the end of the third quarter with Maryland comfortably ahead.

The Terps turned the ball over more as the game went on, but grew a large enough lead to avoid punishment. Both teams were sloppier in attack as the final quarter progressed, as Maryland’s typically slick ball movement slowed.

In the waning moments of the fourth quarter, the Terps tacked on a few more goals. Zappitello found Daniel Kelly with a full-field assist as Maryland caught Virginia on the ride, one that became more and more desperate as the clock wound down.

While their celebration was more muted than Virginia’s following last year’s national championship victory, the Terps greeted backup goalkeeper Drew Morris as the final buzzer sounded and they secured their spot in the Final Four.

“A lot of [us] experienced what happened last year and years prior to that, but at the same time, it’s a game, we’re trying to reach our end goal and that’s win a national championship,” Zappitello said.