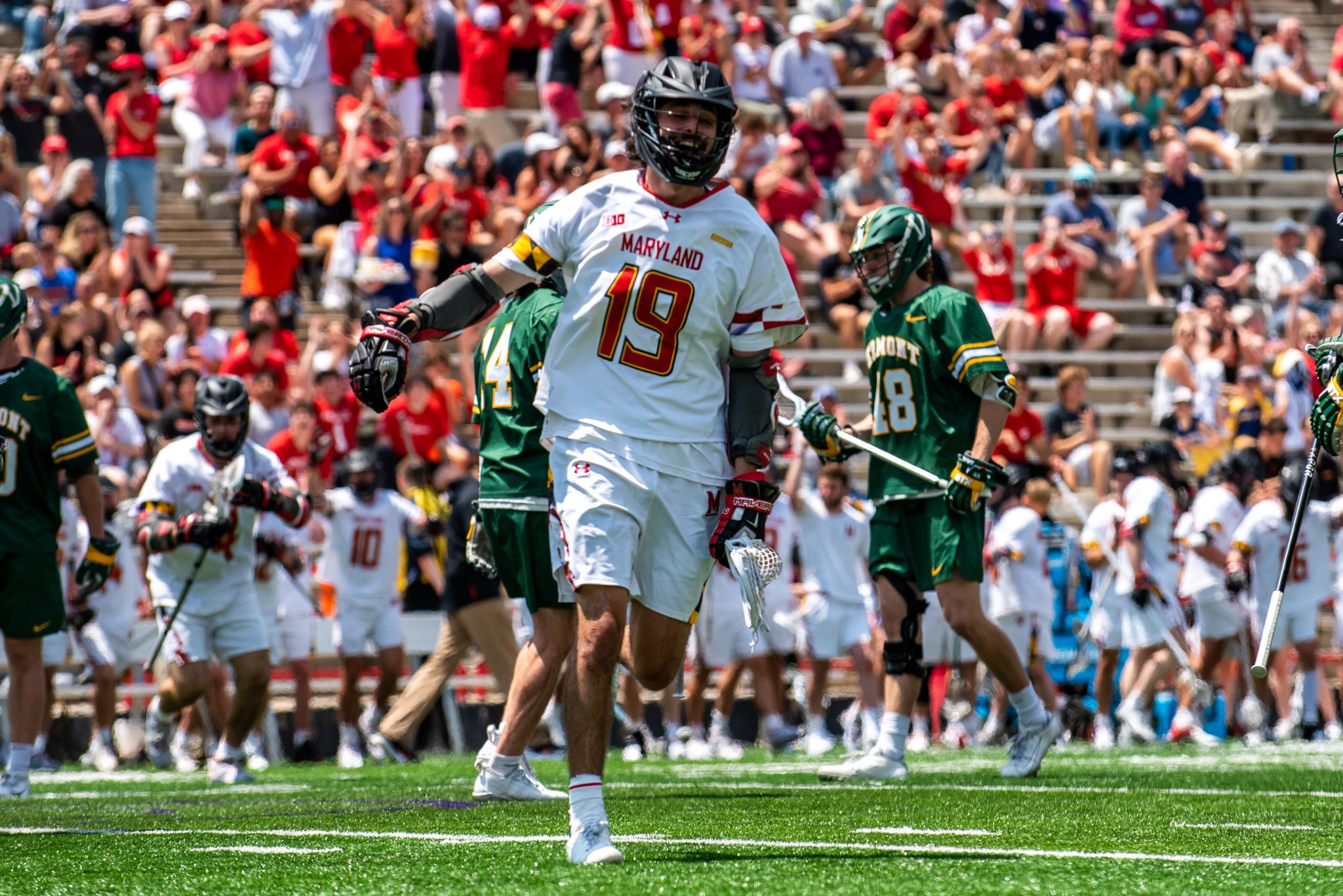 Receiving a pass from Logan Wisnauskas, Keegan Khan adjusted his stick to his left hand before wrapping it behind his back.

His shot found the bottom corner as he trailed off to the corner of the field to celebrate.

“[Khan] scored against High Point, the first game of the year, behind-the-back and he said ‘I’ve never done that before,’” Jonathan Donville said. “At this point, I just assume he’s lying. I think he’s done three of them now [this season].”

The exquisite finish was one of many in a nine-goal second quarter for Maryland men’s lacrosse that helped them get out to an early lead that Vermont would never recover from.

The Terps steamrolled the Catamounts, 21-5, and notched their largest ever win in the NCAA tournament.

The last time a team won a game by 16 goals or more in the national tournament was a 20-3 victory for Syracuse over Canisius in the first round of the 2008 tournament.

The Terps also notched their first 20-goal game in the NCAA tournament since a 22-11 victory over Navy in 1976.

“Credit to Maryland, amazing effort by them today,” Vermont coach Chris Feifs said. “Certainly the best Maryland team that I’ve seen. I thought they did a fantastic job of starting fast and just dominating in every phase of the game.”

The historic win sets up a rematch of last year’s national championship between Maryland and Virginia in the quarterfinals, which will be played in Columbus, Ohio on May 22.

The Terps got out to an early lead with goals from Wisnauskas, Eric Malever and Owen Murphy, but both sides struggled to create open scoring opportunities early on.

The teams were held scoreless for the last nine minutes of the first quarter as both goalkeepers — Vermont’s Ryan Cornell and Maryland’s Logan McNaney — made point-blank saves to keep the score at 3-1.

After being stifled in the first quarter and committing five turnovers, Maryland’s offense erupted in the second frame. The Terps scored nine goals in the quarter as they pulled away from the Catamounts.

“I think we avoided some [takeaway checks] and we got out in transition, won faceoffs and kind of got ourselves rolling,” Donville said of Maryland’s second quarter.

Seven different goalscorers contributed in the frame, which started with goals in quick succession from midfielders Donville, Jack Koras and Anthony DeMaio.

Midway through the quarter, Ajax Zappitello sprinted forward in transition and unleashed a shot that trickled past Cornell and into the back of the net for his first career goal.

Khan netted twice, Wisnauskas scored and a rip from Murphy rounded out a 9-0 run for the Terps as they held Vermont scoreless for 23 minutes. Maryland carried a comfortable 12-2 halftime lead.

The Catamounts rarely got a chance to attack with Luke Wierman’s control of the faceoff X, who finished the game 16-for-19.

“Wierman is the best faceoff guy I’ve ever seen out of Maryland,” Feifs said. “He’s an athlete, not just a faceoff guy. He can score, he can play defense, he can scrap for loose balls. He really sets the bar for that position right now.”

The Terps continued to dominate in the third quarter as Murphy and DeMaio both bagged hat tricks and the Catamounts couldn’t find the back of the net. Maryland outscored Vermont 6-1 in the frame and put the game out of reach.

Ryan Siracusa grabbed his first career goal as Daniel Kelly and Gabe Goforth added tallies for the Terps in the fourth quarter with the game already in hand. The comprehensive win allows Maryland to coast into the quarterfinals and a rematch against the Cavaliers.