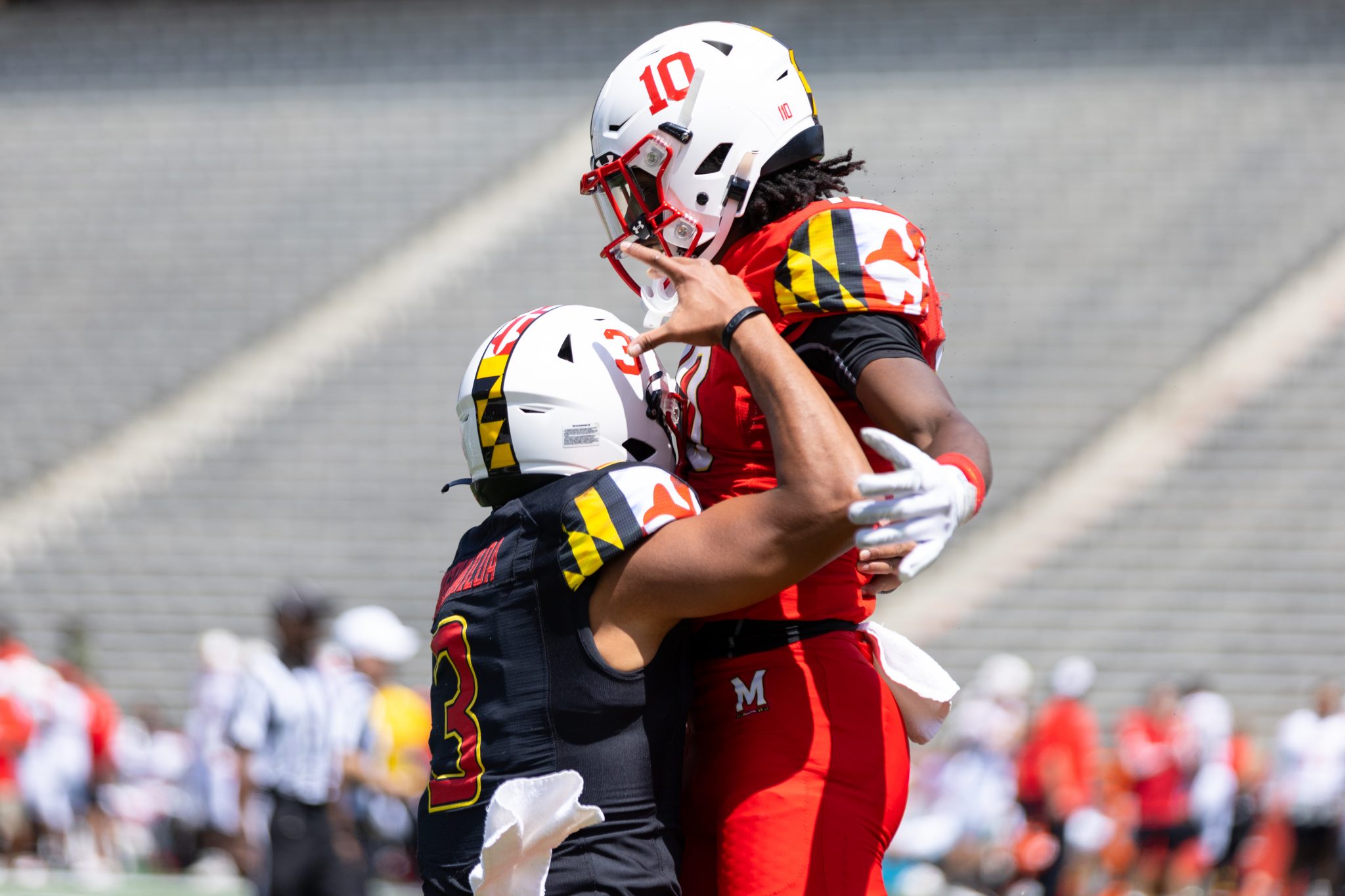 By Jacob Richman and Varun Shankar

Maryland football is coming off one of its best seasons in recent memory. But for the Terps, it was only the beginning.

“We’re still a work in progress for our [2022] season,” Locksley said. “It wasn’t perfect out there, but I do like the way we competed in all three phases.”

New and old faces took the field at Maryland Stadium with the Red Team featuring the Terps’ first-string offense and the White Team sporting the best of Maryland’s defense.

Here are four takeaways from the scrimmage, which the Red Team won, 14-3:

Taulia Tagovailoa has some new targets

After completing, arguably, the best single season by a quarterback in Terp history, redshirt junior Taulia Tagovailoa has returned for another year. And he’s got some new weapons.

Highlighted by Florida junior transfer Jacob Copeland, Maryland showcased further depth in both the receiver and tight end rooms in its spring game.

Come the beginning of the season, the Terps will boast a returning Dontay Demus Jr., Rakim Jarrett and Jeshaun Jones — who didn’t participate in the scrimmage — to go along with Copeland. But, injuries have meant that younger receivers such as sophomore Tai Felton have had the chance to take steps forward.

Copeland was the star of the day, hauling in five catches for 70 yards, enough to have him voted MVP of the game by the media.

“This offense is a great thing,” Copeland said. “The way this system works is like, they want all their alpha dogs on the field at once.”

After losing an alpha in tight end Chigoziem Okonkwo — who was drafted by the Tennessee Titans just moments after the game ended — there is no shortage of talent left at the position.

Redshirt sophomore Corey Dyches’ name has been on the tongues of nearly every Maryland coach as an impact player for the coming season. He flashed some of that, grabbing a 46-yard catch in the first quarter.

Tagovailoa — who finished with 144 yards and a touchdown — floated a pass perfectly between two defenders and Dyches pulled it down for a massive gain. A few moments later, Tagovailoa hit Felton on a slant for a score and the Terps reintroduced their ability in the air.

Playmakers are rising at running back

The past few seasons, Maryland has produced multiple NFL-caliber running backs like Jake Funk, Ty Johnson and Anthony McFarland Jr. But for the first time in a number of years the star of the running back room is up in the air.

“That’s one of the few positions of strength that we feel we have the type of depth that we’re going to need to get through the season, but also the talent in that room,” Locksley said.

Littleton and Faamatau are both dealing with injuries — the latter went down after a 13-yard run and didn’t return — but Hemby and McDonald paved the way for their teams.

Hemby broke off the first major play of the game, taking the ball 43 yards for a touchdown in the first quarter.

“It’s always competitive out there so I just wanted to make a play. The line blocked it perfectly,” Hemby said. “I found my opportunity and I just tried to make something happen.”

McDonald racked up yardage all game and finished with 101 rushing yards, including a big gain in the waning seconds of the scrimmage.

A renewed rushing attack could mean only good things for Maryland. Though Tagovailoa joked that “we should just throw the ball,” the Terps’ veteran offensive line and blossoming playmakers can alleviate some of the pressure on the star quarterback.

The calling card for Maryland last year was by way of Tagovailoa’s arm, but the Terps might see more from their ground game in 2022.

“If you have a good running game, it opens up everything,” Tagovailoa said.

While Tagovailoa remains entrenched as the Terps’ starter, who his backup will be remains a question. Redshirt sophomore David Foust and redshirt junior Eric Najarian split snaps for the White Team.

Najarian, who didn’t attempt a pass last season, completed 7-of-12 passes for 75 yards while Foust went 13-of-22 for 106. Neither threw a touchdown, as two White Team drives stalled out in the red zone.

Locksley and the Terps coaching staff intentionally engineered a two-minute drill scenario. The White Team received the ball at their own 13-yard line with 1:33 to go. Najarian drove them down to the Red Team’s 14-yard line before Jack Howes drilled a 32-yard field goal as time expired.

Faust’s best drive came with three minutes left in the contest. He led the White Team down from their own-10 yard yard line, completing five passes before time expired with his team a mere three-yards away from the endzone.

“I liked the way the young quarterbacks managed [the two-minute situation],” Locksley said. “Both sides did a really good job of moving the ball. Obviously that white offense struggled to finish drives and punch it in.”

The White Team did operate shorthanded with Littleton sitting out, but Colby McDonald swapped teams and said he was pleased with his quarterbacks’ performance.

“They’ve been here for a while,” McDonald said. “They all know the system pretty well.”

Mike Locksley signed a five-year extension with Maryland football on Friday, and the coach joked about his new contract with a reporter who asked after the game.

“Where’d you hear that?” Locksley asked jokingly. “All my cousins are calling me, I don’t think that’s true. You need to check your sources,” he said to laughter.

He said that his new deal, which will keep him in College Park through the 2026 season, is recognition from Athletic Director Damon Evans and President Daryll Pines of the “necessary progress” that he, his coaches, and the rest of the football staff have made in his four-year tenure.

The coach called Maryland his dream job and home in the press release announcing the extension, and he reaffirmed his desire to continue building up the Terps’ program.

“We’re not even close to scratching the surface … for me it’s rewarding to know that I’ll have an opportunity to continue to dream big here at the University of Maryland,” Locksley said. “To continue to work to take the next step to put this program back to where we can compete for Big Ten Championships.”