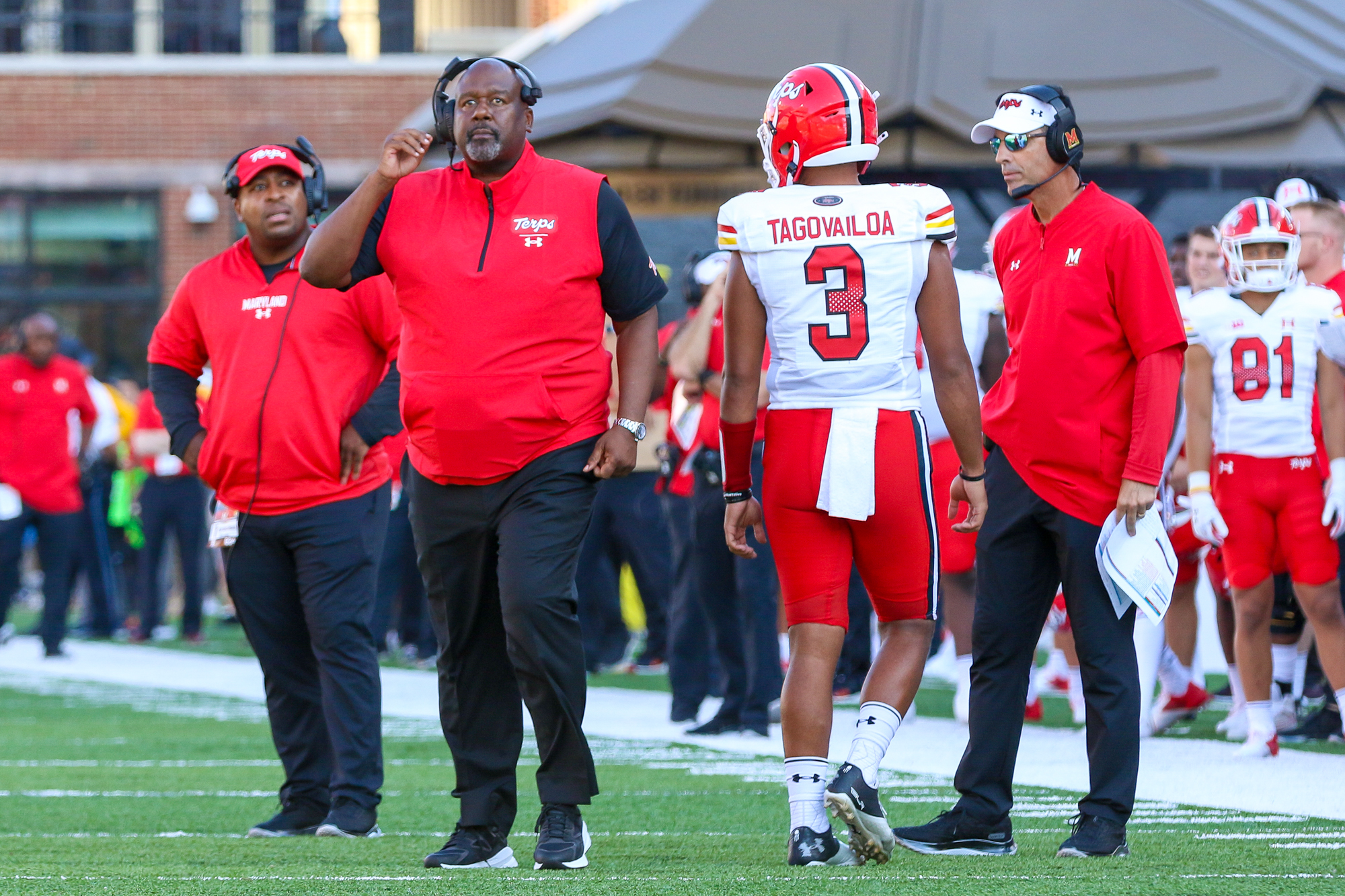 When Maryland football coach Mike Locksley reflects on the 2021 season, his mind unsurprisingly goes to his team’s victory over Virginia Tech in the Pinstripe Bowl.

As he replays the Terps’ convincing win in New York, hoping to distill what made the difference for his team, it came down to the days leading up to the game.

“I really felt the connection of our team,” Locksley said.

Locksley chalks much of the team’s success in Maryland’s first bowl win in 11 years to the shared experience of making the trip up I-95 to Yankee Stadium and going through the same “pandemic criteria.”

As Locksley dives into the 2022 season with many fresh faces, both players and coaches partaking in experiences together is strengthening the culture and making Maryland into a program unlike many others.

Coach Henry Baker was no stranger to Maryland before he joined Locksley’s staff in 2020 as its cornerbacks coach. Baker played for the Terps from 1994 to 1997 and spent time on Ralph Friedgen’s staff from 2008 to 2009.

But what’s being built now, he said, is nothing like what he’s ever been a part of at any level of play.

Baker attests Maryland is creating a team of coaches that bring a human element to their jobs. Across the coaching landscape, Baker said, coaches get bogged down in a “do what I say” mindset.

“Football coaches are creatures of habit,” Baker said. “That kind of runs rampant in our profession.”

The Terps are trying to break that style of coaching.

“We have an eclectic group of coaches,” Baker said. “Those experiences and some of the things that we’ve gone through as men allow us to be able to sit there and relate to what these kids are going through.”

The staff’s experiences as coaches, husbands and fathers, Baker said, helps to create a partnership between themselves and the players. In this day and age, Baker feels that’s the best way to help get players to their goals.

Baker offers plenty of knowledge on the field, but it’s often been relating to his players that brings the unit closer.

“To build that brotherhood, you’ve just gotta be vulnerable, connect with the person next to you,” cornerback Jakorian Bennett said. “Talking, venting to that person, telling them about your life, that goes a long way.”

As a former Maryland player, Baker understands the importance of staying tied to your alma mater. The Terps have placed an emphasis on reconnecting with their alumni since Locksley became head coach, but building stronger bonds during the players’ careers is becoming more important to the program.

“It’s really a lifetime brotherhood and friendship that you end up developing while you’re here on campus,” Baker said. “Ultimately, that’s what people really want to be a part of. We want to go somewhere where it feels like family, and it’s more of a brotherhood as opposed to just what they do in between the lines on the field.”

Despite Miller arriving in College Park a year after Okonkwo, the duo’s ascent to national prominence has gone nearly hand-in-hand.

Okonkwo is arguably one of the top-10 tight end prospects expected to have his name called in the 2022 NFL Draft, and Miller was promoted to co-offensive coordinator during the offseason. But along the way, it was all about mutual respect — another partnership between player and coach.

That tactic yielded major results as Okonkwo worked his way back from missing the 2020 season because of medical reasons to being one of the most dynamic tight ends in the Big Ten.

After the season, Okonkwo’s stock continued to rise as he put on a show at the NFL Combine. His 40-yard dash time of 4.52 seconds was the fastest among tight ends at the scouting combine.

When Maryland hosted its own pro day, Okonkwo showed off more of his skills to the 45 scouts in attendance. Miller was there too, which meant a lot to the Powder Springs, Georgia native.

“It’s kind of like your dad sending you off,” Okonkwo said. “It’s a really cool moment to see the guy that helped me get to that point sending me off.”

Miller was very proud of all the young tight end accomplished putting himself on the map. But Miller had a clear impact on preparing Okonkwo for the next level. And his efforts did not go unnoticed.

Miller was promoted to co-offensive coordinator just a year after taking over the job as passing game coordinator. He was also named to the American Football Coaches Association’s 35 Under 35 Coaches Leadership Institute in December 2021.

According to Locksley, Miller had opportunities in the offseason to leave the program and coach elsewhere.

However, Miller stayed on with the Terps. The link he and Okonkwo made is one Maryland is going to want to replicate even when Okonkwo is catching passes on Sundays.

“When I recruit kids, I tell them it’s all about a life-on-life relationship. I felt like I had that with [Okonkwo],” Miller said. “I mean, he’s babysat my kids before, come over to my house and had dinner. We work together.”

In his fourth season at the helm of Maryland football, Locksley’s staff has been remodeled once again. New coaches and a plethora of role changes mean the Terps’ coaching unit looks different.

Even getting to that group required some turmoil.

In January, Maryland had a verbal agreement with Kevin Steele to become its new defensive coordinator. Steele had begun working with the Terps and been in their offices before backing out to join Miami, according to The Washington Post.

Locksley then promoted Brian Williams to take on the role after serving as co-defensive coordinator and becoming the defense’s head play caller in the final two games of the season.

If there’s one who knows the importance of the coach-player relationship, it’s Brewer.

Brewer has a reputation as one of the top receivers coaches in the nation. He developed the likes of Dez Bryant and Biletnikoff Award winners Randy Moss and Justin Blackmon.

Locksley first tried to hire Brewer when he took over as head coach of the Terps, however, outside circumstances kept the two separated.

“Timing is everything,” Brewer said. “We tried to hook up a few years earlier, and it just didn’t work out that way. I was coming out of the NFL and my wife is a breast cancer survivor and medically and family-wise, it was a really good fit where I was at that particular time.”

But after Brewer’s recent run with Louisville ended, it didn’t require much to get the 30-year veteran on the staff.

“When the opportunity came back around, I pursued it, he didn’t have to pursue me,” Brewer said.

Maryland already featured a stellar group of receivers, and adding Brewer could take the corps to another level.

Beyond his experience, Brewer brings a mentality that’s already catching on with the Terp receivers: “freak time.”

According to Maryland receiver Rakim Jarrett, whenever Brewer enters a meeting, he walks into a room and says, “freak time,” to which his unit of receivers respond, “show time.”

While reiterating that his wide receivers are “freaks” might not sound like the sort of mantra the rest of the team takes on, the players have taken to the idea and appreciate the enthusiasm Brewer brings.

“He treat you like you’re a grown man,” recent transfer receiver Jacob Copeland said. “Just being around coach Brewer each and every day, he teaches me something new. During the offseason, I’d meet up with him earlier, go through plays, learn the formations and concepts.”

While coaching methods and strategies are crucial to victory, Maryland coaches agree it all starts with buy-in from their players.

The Terps found tangible success for the first time in the Locksley era in 2021. And even the newest of coaches can see the players want more.

Putting together Maryland’s football program over the past few years has been an extensive process and is far from over. But constructing a new expectation around a coaching staff of empathy is proving a major positive so far.

“Seeing the attitude that they have, seeing the twinkle in their eyes, the hunger that these guys have. They’re ready to go. They see it,” Neighbors said.