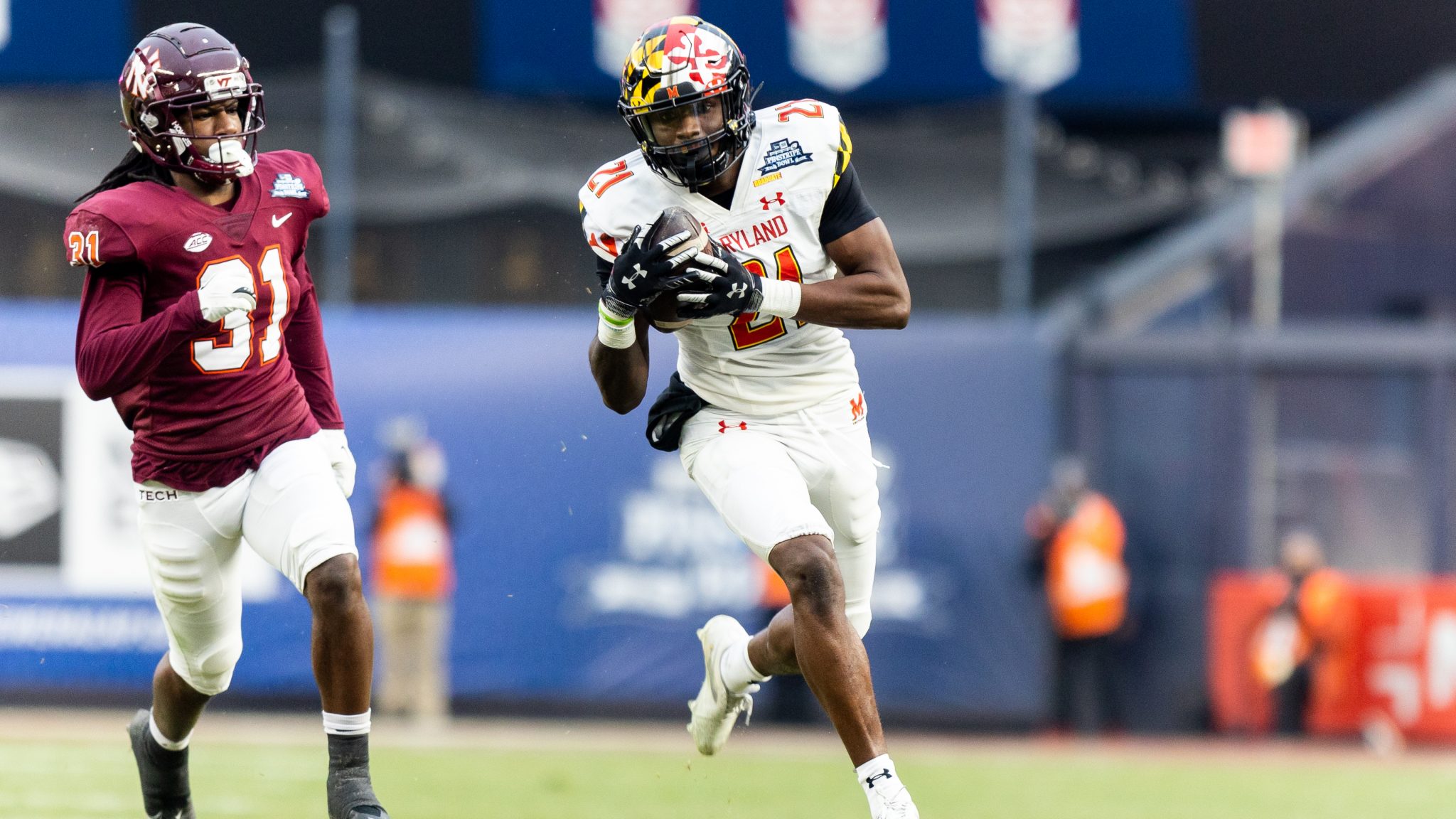 Darryl Jones takes the ball 70 yards for a touchdown during Maryland football's 54-10 win over Virginia Tech in the Pinstripe Bowl on Dec. 29, 2021. (Julia Nikhinson/The Diamondback)

NEW YORK — In a venue known for legendary postseason performances, Darryl Jones delivered one of his own.

In possibly his final college game, Jones tallied 111 receiving yards and two touchdowns, running all over the Yankee Stadium sod. He kickstarted an efficient Maryland offense that steamrolled Virginia Tech, 54-10, in the Pinstripe Bowl.

The Terps secured their first bowl victory since 2010 and their first winning season since 2014. Jones made his impact known early.

Quarterback Taulia Tagovailoa unleashed a frozen rope to Jones for a 70-yard score, his first touchdown of his college career. The two connected again in the third quarter, with Tagovailoa showing excellent patience on fourth down and hurling a fastball to Jones. He scampered 32 yards for a touchdown, sending Maryland up 24.

“When it happened, I wasn’t really thinking about it,” Jones said. “I’ll definitely remember this. I’ll tell this story for I don’t know how many years. It’s definitely special.”

But the Terps were in cruise control long before that.

Maryland (7-6) recorded two 60-yard drives in the second quarter, each ending in points. The Terps first needed just five plays to find the end zone, with Antwain Littleton II supplying his first career rushing touchdown. Then, they snuck in under the clock, marching down the field in under a minute to set up Joseph Petrino for a 44-yard field goal as the first half ended.

“[Our aggression] just showed up right there,” Tagovailoa said. “It gives us a lot of confidence … to just throw the rock around.”

The senior kicker, also potentially playing in his last collegiate game, shined after a topsy-turvy season. He drilled two field goals and five extra points, turning in one of the steadiest performances of his four-year career.

Petrino was not the only senior who shined. Defensive lineman Greg Rose, who was not a lock for starting in the preseason, scored, too. He fielded a ground ball and returned it for an 11-yard touchdown, the fumble caused by a vicious Nick Cross hit on Virginia Tech quarterback Connor Blumrick.

Running back Tayon Fleet-Davis, wide receiver Brian Cobbs and tight end Chig Okonkwo each contributed once more, their college careers also set to close. But one senior could not join the festivities, as wideout Carlos Carriere did not make the trip up to the Bronx.

“This was our goal. When we came in, [the now-seniors] were like, ‘We’re going to come in and play and try to turn this program around.’ And we accomplished what we set out to do,” Jones said. “This is the first step of many.”

Other units starred, too. The punt return team, which struggled mightily all season, opened the scoring when Tarheeb Still took the game’s first boot 92 yards to the end zone. It was Maryland’s first special teams touchdown of the year and the longest punt return in team history.

The Terps had only three drives last longer than 2:28. Despite having their offense on the field for nearly 35 minutes, the Hokies could not counter.

Virginia Tech (6-7) was depleted, down its top two quarterbacks and numerous offensive stalwarts. So, the Hokies leaned on their rushing attack, a committee led by Raheem Blackshear and their third-string quarterback, Blumrick.

But Maryland’s defense was up to task, surrendering just 122 rushing yards on 48 carries and holding its former ACC foe to 6-for-18 on third down.

The two times Virginia Tech scored, it was able to break big plays. Following a successful fake punt, Jaden Payoute hauled in a 42-yard catch, setting up a 36-yard field goal by John Parker Romo. And near the end of the first half, Blumrick launched a 34-yard pass before rushing three yards for a touchdown.

But that was all the Hokies could muster, held down by inexperience and a Terps defense ready for the challenge.

“We had good preparation. That’s what led to that success,” Still said.

Even as the day belonged to Maryland, Jones made sure to shine brightest in the big city. Possibly his last performance in a Terps uniform was his best, earning him well-deserved rest in the fourth quarter.

Whether or not Jones uses his extra year of eligibility is unknown. But either way, he gave Maryland a flash of hope entering the 2022 season, another postseason legend born in the Bronx.

“We’ve been waiting a long time for a game like this,” coach Mike Locksley said. “It’s only fitting that he would get it in his last game as a Terp.”