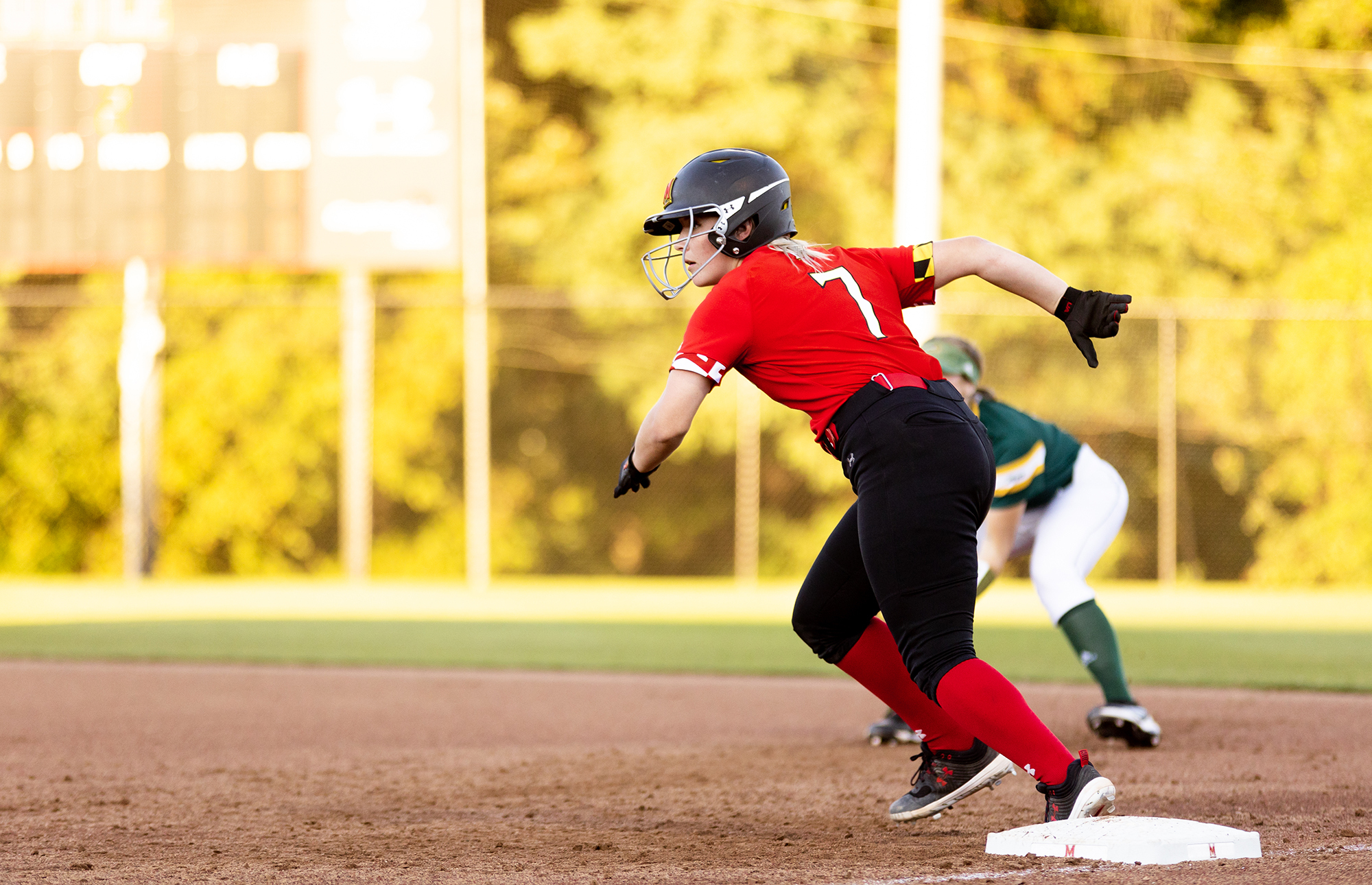 Down by one to UNC Greensboro in the bottom of the tenth, Maryland softball looked to keep the game alive.

With two outs recorded, Mackense Greico stood at the plate as the Terps’ last shot at a win. With runners on second and third, Greico grounded out to first, ending the game in a defeating 6-5 loss for Maryland.

Maryland split its Saturday doubleheader against UNC Greensboro. The Spartans got the better of the Terps in extras in game one, 6-5, but the Terps avenged their loss with a 5-3 win in game two.

Maryland’s first game of the day against UNC Greensboro started out as a pitching duel. Through three innings, only one Terp reached base on a walk and only two Spartans notched hits.

The Terps offense finally woke up in the bottom of the fourth. Megan Mikami led off the inning with a bunt single down the third base line and Taylor Okada followed with a single through the left side of the infield.

With runners on the corners and no outs, Trinity Schlotterbeck stepped up to the plate looking to score the first run of the game. Schlotterbeck drilled a grounder past the right side of the Spartans defense, scoring Mikami from third, putting Maryland up 1-0.

With no outs still in the fourth, the Terps looked to extend their lead. The next three batters notched a sac-bunt, a fielder’s choice, and a walk, setting up the bases loaded with two outs for Michaela Jones.

In the top of the sixth, the Spartans had their best chance to join the Terps on the scoreboard.

Maycin Brown doubled with one out in the inning, setting up Blayke Batten to hit her home. Batten crushed the ball to deep left field, over the head of Mikami for the two-run homer.

With one crack of the bat, Maryland’s lead was trimmed to one going into the bottom of the sixth.

Kyra Pittman entered in the top of the seventh in relief of Haley Ellefson, looking to close out the game and secure the save.

With a runner on third and one out, Hannah Kincer stepped into the batter’s box. Kincer sent the ball over the fence in left center to put UNC Greensboro on top, 4-3.

Pittman blew the save for the Terps, and after being in control most of the game, they were down to their final three outs in the bottom of the seventh.

The first two batters for Maryland struck out and lined out. Maryland had one out left to try to tie the game.

Okada was hit by a pitch, bringing Schlotterbeck to the plate as Maryland’s last hope. Schlotterbeck doubled to center field and Kamryn Davis, who came in as a pinch runner for Okada, scored from first. Schlotterbeck was thrown out trying to stretch her double to a triple, but the damage was done.

The game went to extra innings.

Jessie Shipley stepped up to the plate with the bases loaded and nobody out for UNC Greensboro. Shipley flied out to left field and Makenna Matthijs crossed home plate. The Spartans went back in front, 5-4.

Schlotterbeck, placed on second base to start the bottom of the eighth, scored with two outs on a passed ball to tie the game at five apiece to send the game to a ninth inning.

After a scoreless ninth, UNC Greensboro scored in the top of the tenth. Batten drove home Jordan Gontram on an RBI single with two outs. The Spartans looked to finally close out the game and secure the victory, up 6-5.

Maryland was unable to score in the bottom of the tenth. Scott was able to get the shutdown inning she needed in the circle to secure the 6-5 victory for the Spartans.

Like game one, the Terps’ second game against the Spartans started out as a pitchers’ duel — the first four innings were scoreless.

[With new coaches and new players, Maryland softball strives to improve on 2021 season]

Both teams had opportunities to get on the scoreboard with runners in scoring position in the first few innings, but neither side could pull a run together.

In the top of the fifth, UNC Greensboro plated the first run of the game.

With runners on second and third and no outs, Batten stepped into the box looking to give the Spartans the lead. She flied out to Jaeda McFarland in center, but an error on the throw allowed Matthijs to score.

Maryland had its best chance to score in the bottom of the fifth.

Following two walks and a single, Kiley Goff stepped into the batter’s box with the bases loaded and nobody out. Goff singled to third base, scoring Campbell Kline and moving everyone up a base to keep the bases loaded for Mikami.

Mikami flied out to left field for a sac-fly, scoring Greico and putting Maryland in front 2-1 in the fifth.

UNCG tied the game the very next inning.

With runners on second and third in the top of the sixth, Tori Dalehite hit a sac-fly to drive home a run, tying the game 2-2 as Maryland came to bat in the bottom half of the inning.

The Terps took their lead right back in the bottom of the sixth, thanks to sloppy Spartans defense.

Greico stepped up to the plate with runners on second and third and one out. Greico walked, but ball four was a wild pitch, allowing both Schlotterbeck and Butler to score. Greico wound up at third at the end of the play, coming in to score on a Jones RBI single into left field.

The Terps led, 5-2, entering the seventh frame. With one out against the Spartans, Batten smacked a homer to left field to trim Maryland’s lead down to two. As a result, coach Mark Montgomery brought Ellefson out of the pen to close out the game.

Ellefson did just that, securing the final two outs of the game as Maryland won, 5-3, moving them to 2-2 on the young season.