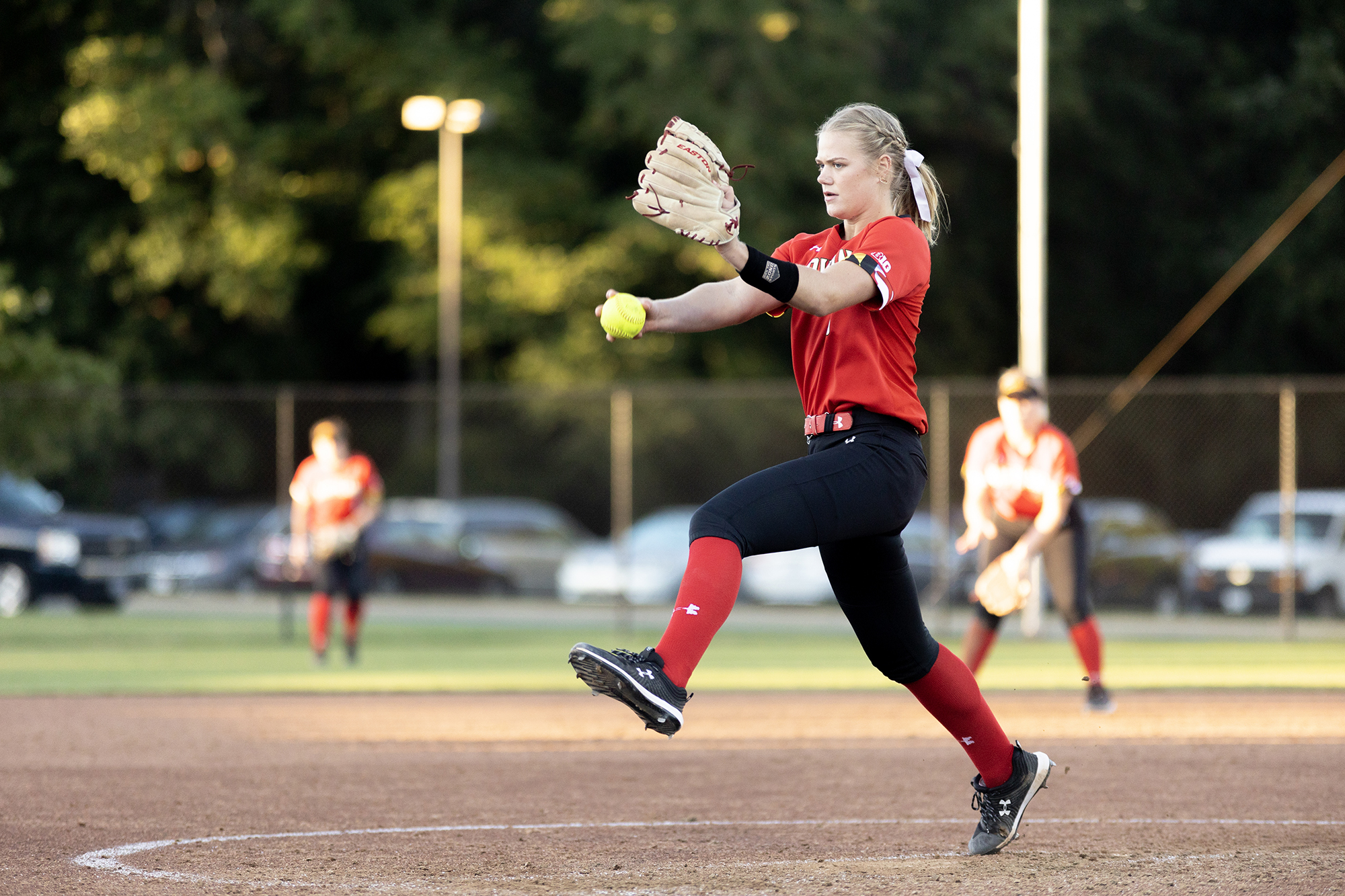 Having its lead trimmed down to two entering the third inning of its matchup with FIU, Maryland softball looked for insurance runs for Courtney Wyche on the mound.

The Terps did just that.

Trinity Schlotterbeck notched the Terps’ first RBI of the third on a groundout. Maryland scored three more times in the inning, all on RBI singles.

Jaeda McFarland and Taylor Okada both singled up the middle and Taylor Liguori lined one through the left side, scoring a combined three runs to all but seal the Terps’ game two victory over the Panthers.

Maryland split its season-opening doubleheader, securing a mercy-rule victory over FIU, 10-2, but falling to No. 18 Tennessee earlier in the afternoon, 2-1.

Maryland struck first in its first game of the day. With the game scoreless in the top of the second, Michaela Jones stepped up to the plate with Schlotterbeck on third and Mackense Greico on first with only one out. The Terps had a golden opportunity to capitalize early in the game.

Jones, following a brief talk with coach Mark Montgomery before her at-bat, attempted a bunt as the double steal was put on. Jones missed the bunt, but Greico moved up to second and Schlotterbeck raced home in time to score to put the Terps up 1-0.

In the bottom of the third, Tennessee had a runner on second with no outs. Kaitlin Parsons reached on a single and immediately stole second to put the tying run in scoring position. Last year, Parsons stole 15 bases for the Volunteers.

Following an Amanda Ayala pop up to center field, Kiki Milloy entered the batter’s box with one out. Milloy singled through the right side of the infield and Parsons got a good jump from second. Parsons raced around third, slid in just ahead of the tag at home to tie the game at one apiece.

[With new coaches and new players, Maryland softball strives to improve on 2021 season]

With the game still tied entering the bottom of the fifth, Tennessee had the chance to grab its first lead of the game.

Lair Beautae led off the inning with a single and advanced to second on a sacrifice bunt. With one out, Milloy stepped up to the plate looking for her second RBI of the game. She singled into left-center and Beautae sprinted home to score and give the Volunteers the lead, 2-1.

At the end of the fifth, the score was Milloy two, Maryland one.

Tennessee starting pitcher Erin Edmoundson was taken out of the game with one out in the top of the sixth. Edmoundson left on track for the win as Ashley Rogers entered to close out the game over the final inning and two-thirds.

Maryland was unable to score off Rogers and fell in their opening game of the season, 2-1.

Despite the loss, Schlotterbeck pitched well for the Terps. Schlotterbeck threw all six innings, giving up only two runs on four hits as she was credited with the loss.

Like in their first contest of the day, the Terps scored first in game two against FIU, this time in the opening frame.

Following a groundout to start the game, Maryland’s next three batters reached base off a single and two walks. Regan Kerr took the plate with the bases loaded hoping to do damage. Kerr lined the ball up the middle for a base hit, scoring Megan Mikami easily from third. Liguori advanced to second, but Okada was gunned down at home by the Panthers’ Madison Lewis to limit the scoring to one.

But Maryland wasn’t done. Given yet another bases-loaded opportunity in the first, Jones brought in two more runs. She knocked a grounder up the middle past the infield, scoring Kerr and Campbell Kline to extend the Terps lead to three.

The very next batter, Ruby Butler, singled through the left side, scoring Amelia Lech to make it 4-0 Maryland, still in the top of the first.

FIU’s starting pitcher, Brooklynn Linneman was taken out of the game without completing an inning. Makaela Carr replaced Linneman in the circle, tasked with giving the Panthers length from the bullpen.

FIU scored a much needed run in the bottom of the first. Alexis Ross led off with a single and came around to score on sac-fly off the bat of Lewis, trimming Maryland’s lead down to three.

FIU added another run the next inning. Brittany Phillips walked with one out in the bottom of the inning, putting pressure on Wyche to lock down. Wyche was unable to do so — Phillips scored from third off a wild pitch to cut the Terps’ lead down to two.

But Maryland came right back in the top of the third.

The Terps led, 8-2, entering the bottom of the third.

After a shutdown inning from Wyche, Maryland kept piling on.

With one out in the inning, Lech doubled to left field. Jones walked, and after her. Butler was hit by a pitch to load the bases for Kiley Goff. Goff flie out to center field, bringing Lech home to score to extend Maryland’s lead to 9-2.

Maryland wasn’t content with its seven-run lead. Jones led off the top of the sixth with a solo home run to left field, the team’s first home run of the season.

Following a shaky start to her outing, Wyche settled down after the second to fire three scoreless innings before she exited after the fifth inning. She gave up two runs on four hits and struck out five to notch her first win of the season.