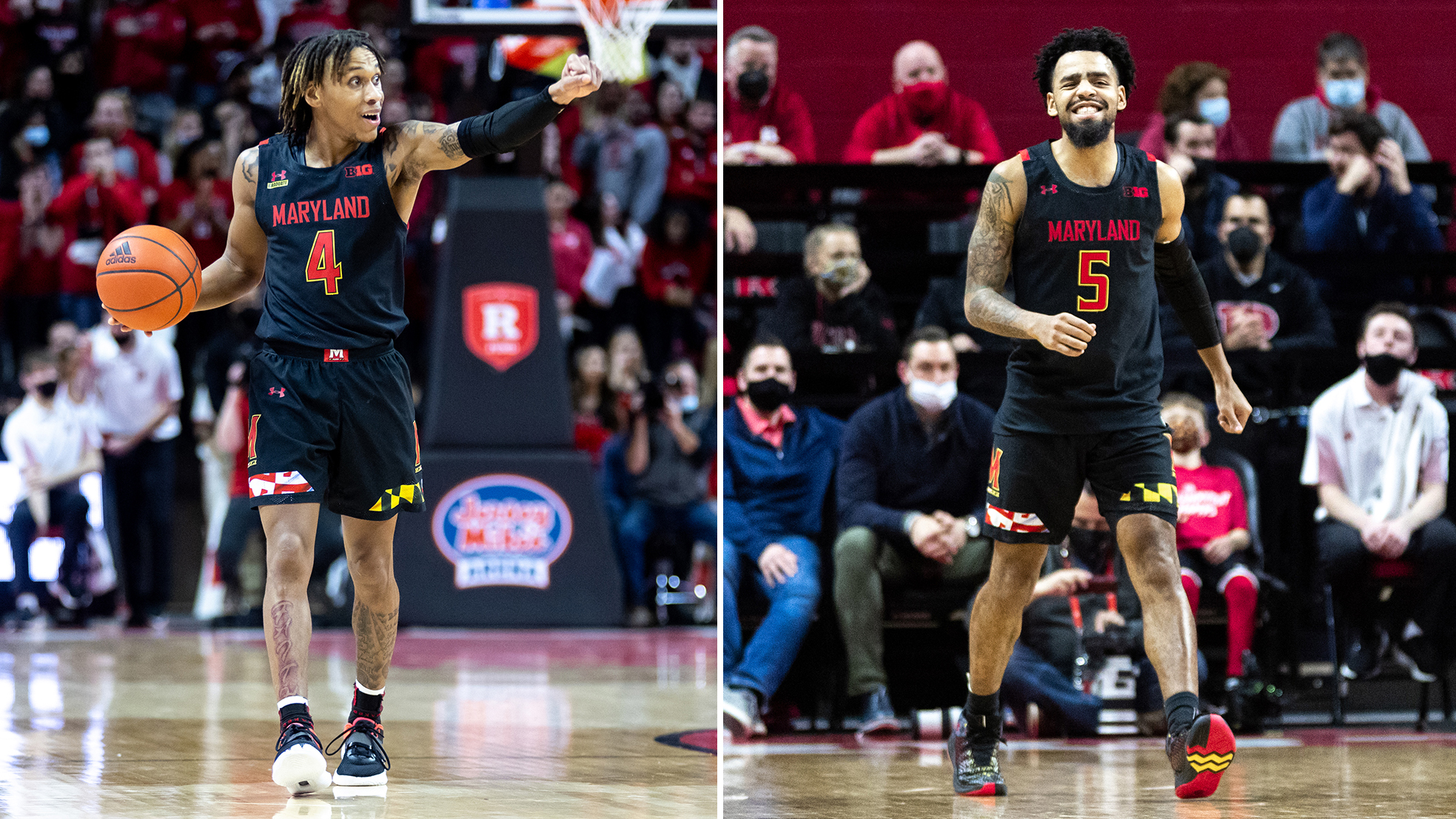 In their 68-60 win over Rutgers on Jan. 25, Ayala and Russell gave some real credence to the idea that they are one of the most dynamic backcourts in the Big Ten. (Julia Nikhinson/The Diamondback)

Entering the 2021-22 season, expectations for the tandem of Eric Ayala and Fatts Russell were sky-high.

After a season with no true point guard on the floor, Maryland men’s basketball brought in the highly touted Rhode Island transfer to pair with its star player in Ayala.

The previous two months or so of the season were more than underwhelming. Amid the chaos in their program, Ayala and Russell turned in inconsistent performances.

Russell, on occasion, goes completely silent through 40 minutes of play, while Ayala is often muzzled for long enough that a commanding late game performance isn’t enough to get a win.

However, in their presiding 68-60 win over Rutgers, Ayala and Russell gave some real credence to the idea that they are one of the most dynamic backcourts in the Big Ten.

“We work really hard, and it’s finally starting to show,” Russell said. “We have confidence in each other.”

Although Qudus Wahab was the spark plug in the opening minutes of the Terps’ third conference win, Ayala and Russell supplied the bulk of what would become a 12-point lead in the first half.

Russell scored 11 of Maryland’s final 13 points in the opening period of play, including three makes from beyond the arc in the last five minutes.

The second half brought more dominance from the pair. Russell and Ayala combined for 25 of the Terps’ 30 points. Russell finished with 23 points and Ayala with 22.

“It was great to see. I love seeing my teammates score the ball,” Hakim Hart said. “It just helps me stay energized on defense.”

And the two were particularly lethal from deep.

Russell hit a season-high five triples. It was also the most he has made since a February 2020 matchup with George Washington.

Neither one has been automatic from beyond the arc this season, but shot a combined 59 percent Tuesday.

Ayala made a duo of unusually long three-pointers in the second half — one on each wing. The first came off balance on the nearside of the court, the second a rocket on a quick feed in from Russell.

“That one I hit today, that was a deep one,” Ayala said, laughing.

It was just the second time the pair have each scored 20 plus points in a Big Ten game this season — the first in a double overtime win over Northwestern.

The best showing Ayala and Russell had together, though, was in Maryland’s win over then-No. 20 Florida at Barclays Center.

Gators’ coach Mike White said the two — who each scored 19 points — were the difference makers in the matchup. It was the same against the Scarlet Knights. More performances like the unyielding one Ayala and Russell unleashed in New Jersey can only start to push their stock toward what it was to begin the season.

Word has been out on Ayala for much of the season. He’s continually been the subject of opposing teams’ defenses. But when Russell is operating at his best, there’s no stopping them both.

Asked whether his teammates were the best backcourt in the Big Ten, Hart didn’t mince his words.