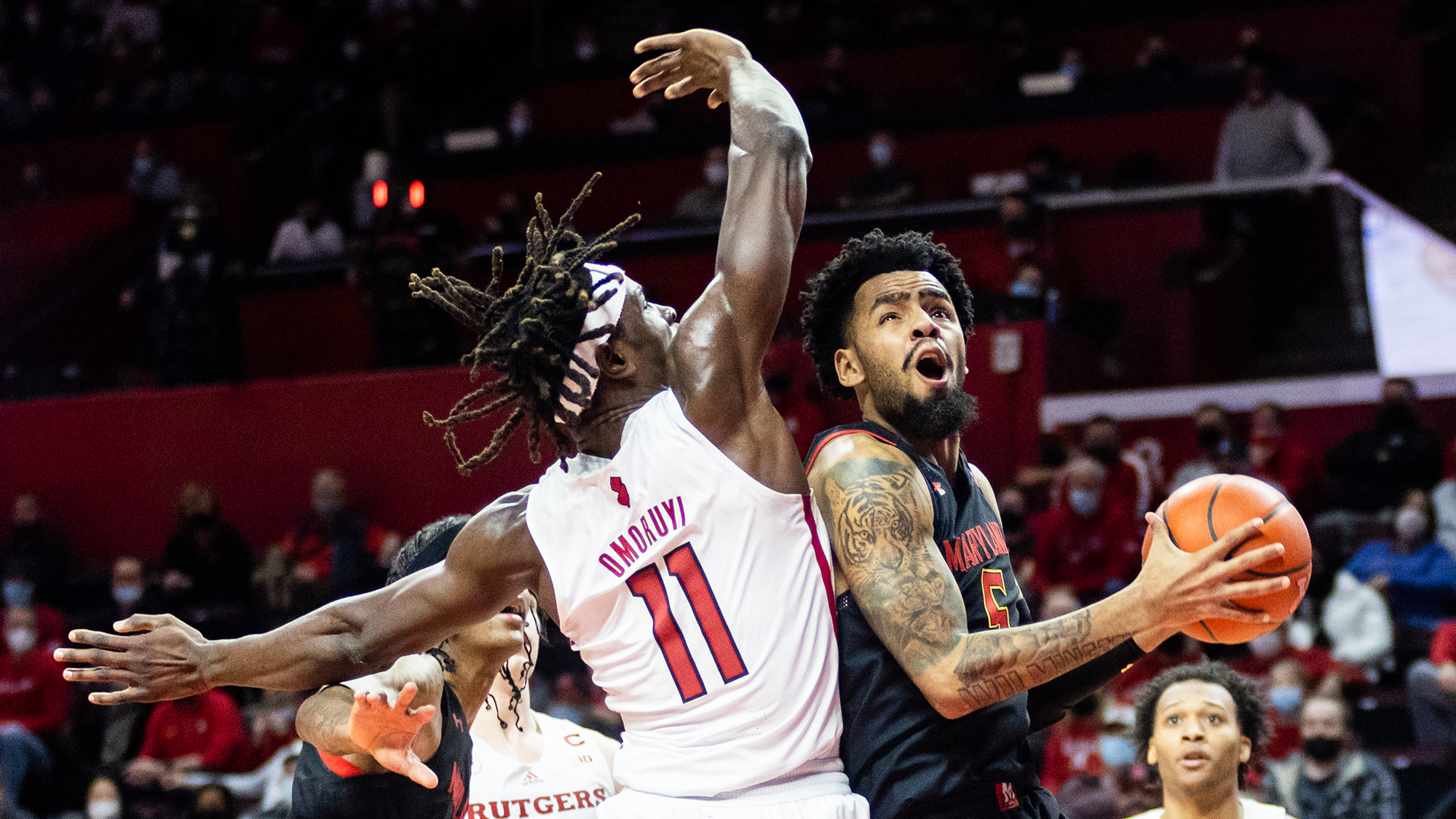 Those three wins all came from rematches. The Terps lost to Northwestern, Illinois and the Scarlet Knights earlier in the season, then beat each of them the second time around.

“Teams tend to get comfortable after they’ve beaten you,” Julian Reese said before the matchup with Rutgers. “As the underdogs, we really have nothing to lose, so why not just attack them?”

And Maryland did just that.

The Terps’ original starting lineup functioned exactly as it needed to against the Scarlet Knights. After a few games of trying out different starting fives, interim head coach Danny Manning went back to basics in his team’s rematch against Rutgers — and Eric Ayala, Fatts Russell, Donta Scott, Hakim Hart and Qudus Wahab delivered in their own ways.

Late in the first half, Russell swished two consecutive threes in transition to put Maryland back up by 20 after Geo Baker broke a long scoreless streak for his squad. Russell made a season-high five threes and shot 7-of-16 from the field.

Ayala dropped 22 points and he made his 200th three-pointer, becoming the fifth player in program history to do so. He and Russell delivered together in a way they hadn’t all season, combining for 45 of the Terps’ 68 points.

“Now that we kinda entered the Big Ten schedule, we’re in the midst of it, got comfortable and familiar with it,” Ayala said. “Playing Rutgers once, they kinda got a feel. . . just getting a feel for the game and each other.”

Scott and Wahab both pulled down six rebounds. Wahab broke into double-digits in the score column after he matched his total points from the last matchup with Rutgers less than two minutes into the opening half.

Harper dropped a career-high 31 points when the Scarlet Knights played the Terps in College Park on Jan. 15. Just 10 days later, Hart held Harper to four points in the first half and 16 points at the final whistle.

“Hakim is our unsung hero,” Manning said. “He’s the glue that holds it together. He makes the right play, he makes big shots, he guards. . . [He] came out and did a really good job of staying in front of Harper and just trying to be there to contest the shot.”

Maryland was poetry in motion for most of the first half. But, as the clock wound down, things began to fall apart.

Rutgers went on an 8-0 scoring run and severely cut into Maryland’s lead. By halftime, the score was just one point off from the Terps’ last midway score with the Scarlet Knights.

Despite their edge, the possibility that Maryland could lose to Rutgers again seemed shockingly real, and history wasn’t on their side.

The Terps’ answer to success in rematches is to play two full halves of basketball. And Manning’s message at halftime was to do exactly that; don’t give up the lead.

Then, Manning’s squad exercised consistency on both sides of the court that it has lacked in previous matchups.

Ayala and Russell stayed strong on offense and Hart held fast on defense.

“We want to win that first game, but after a team beats us we have that fight that we’re not going to let somebody beat us twice. That’s a testament of who we are as people,” Russell said.

Maryland drew two of Rutgers’ stars into foul trouble. Paul Mulcahy — who dropped 15 points on the Terps in the teams’ last meeting — and Harper both struggled with infractions toward the end of the game. Mulcahy had four fouls and Harper had three, which kept them on the bench during pivotal moments of the match and kept their scores down.

Manning has emphasized the importance of playing a complete game. While Manning acknowledged that his team let up a bit late in the game, the Terps still held the lead for over 36 minutes.

“I thought this was one of those games where we played tip to horn in a very unique and difficult place to play,” Manning said. “I think our team is continuing to grow, continuing to develop, and we’ve gotten better since the last time we played this talented Rutgers team.”

What a difference 10 days can make.