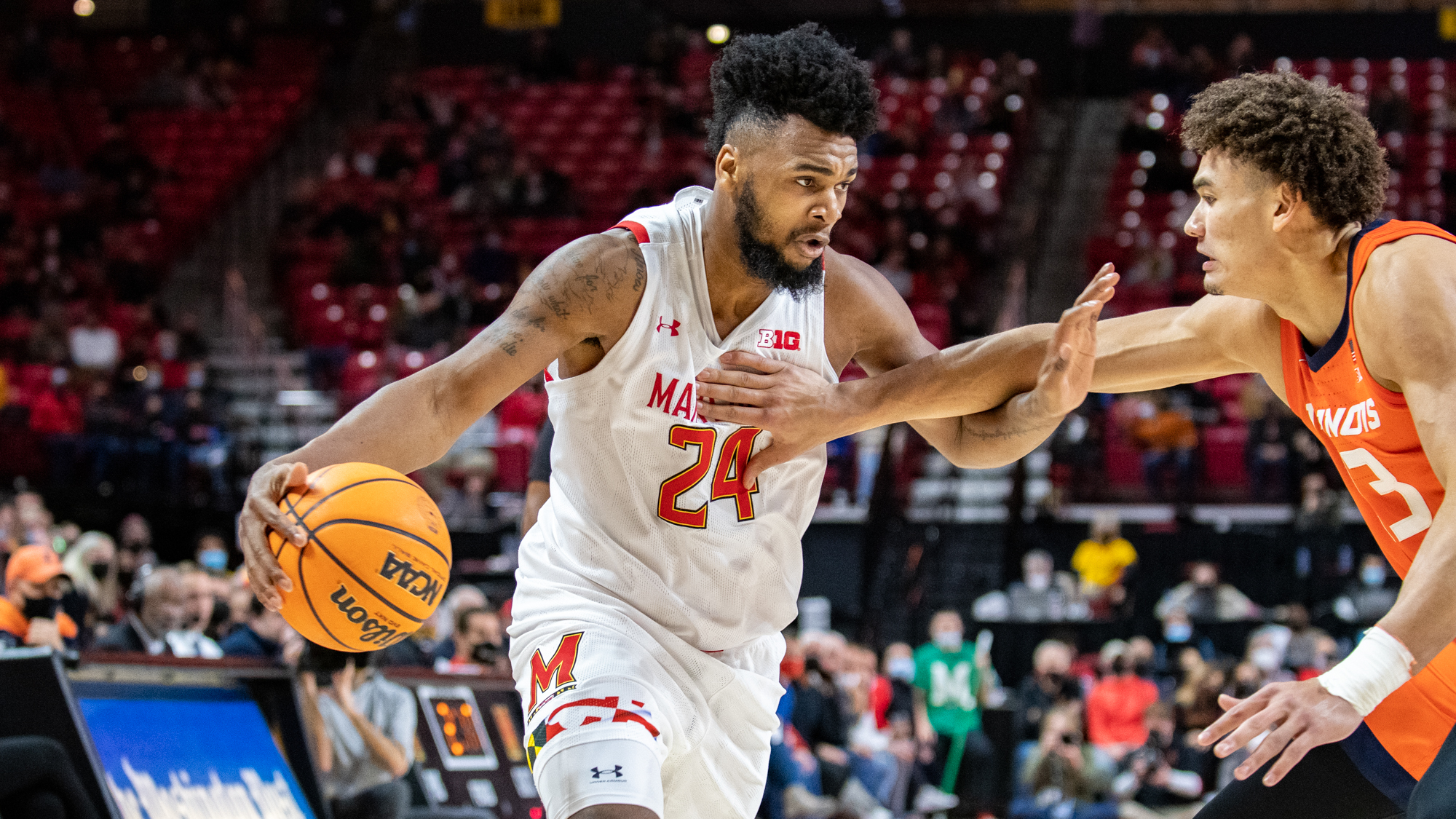 Donta Scott was in a strange spot. For over two months, Scott was a staple in Maryland men’s basketball’s starting five.

But matched up with No. 17 Illinois, Scott took to the bench for the first time at the games’ onset. He said he found out about two days beforehand he wouldn’t be on the court for opening tip-off.

“It was coaches’ decision,” Scott said. “You just gotta adjust to certain things and that’s what I did.”

But matched up with No. 17 Illinois, Scott took to the bench for the first time when the game began.

He entered the matchup just a few minutes in and, from there, proved why he’s been a constant in the Terps’ lineup. The junior posted a game-high 25 points off the bench, including key baskets down the stretch.

Scott pushed Maryland (10-9) to an unexpected upset over the Fighting Illini (13-5), giving the Terps their second Big Ten win.

Manning adjusted his lineup for the third consecutive game, opting to give Simon Wright his first start of the season in lieu of Scott. He has reiterated over the three-game span that he is looking for more from all his players.

Interim head coach Danny Manning adjusted his lineup for the third consecutive game, opting to give Simon Wright his first start of the season in lieu of Scott.

Wright did little on the night, playing just five total minutes between both halves and committing two fouls.

Scott may have sat out the first three minutes of the matchup, but he was quick to establish himself. After a 19-point effort against Michigan, Scott was back in business against the Illini with 10 points in the first half.

Some midrange work got Scott his first basket, later a physical drive and a lucky bounce on the ensuing shot kept him rolling.

“This type of game, for him, is what we like to see from the standpoint that he made some three-pointers, stretched the defense out,” Manning said. “But he also put the ball in [play] and got to the rim, drew fouls and put them in tough situations.”

Both teams jockeyed for position in the opening half, but neither was able to get more than four points beyond the other.

Alfonso Plummer got the Illinois offense moving well with a handful of long-range shots. With the absence of Kofi Cockburn in the paint, Plummer made up for it on the wings, going four-of-six from beyond the arc in the first half.

“It’s a hard deal when you’re without, arguably, the best player in college basketball,” Illinois coach Brad Underwood said. “Donta Scott did a great job of taking advantage of the fact he wasn’t there.”

The name of the game for the Terps was making the most of their paint touches. And they did so with gusto in the first half, dominating post-scoring 20-10.

Qudus Wahab was the first to find a basket down low, sending a floater over the head of Benjamin Bosmans-Verdonk. The 6-foot-11 center has struggled to score, averaging just 3.2 points over the last five games.

Without the looming presence of Cockburn on him, Wahab put in one of his best performances as of late with 11 points. Wahab’s feature moment came with under five minutes in the opening half, where he managed to slam home back-to-back dunks after Hakim Hart and Fatts Russell drew Illini defenders away from the big man.

“We knew when we got in the paint that they were all going to collapse,” Russell said. “We told [Qudus] we’re going to get it up off the rim and you’ve just gotta get…the rebound.”

Wahab wasn’t the only one to finish an emphatic dunk. After stripping the ball away from his defender, Hart made a mad-dash toward the other end before rising to the basket and putting away the final score of the half.

The Terps went into the locker room with a slim, but well-earned, 37-35 lead.

Plummer kicked things off in the second half just as he did early in the first — sinking a three-pointer.

Though Wahab continued his strong showing by converting an and-one opportunity, a pair of makes from Trent Frazier and a layup from Bosmans-Verdonk gave Illinois the largest lead of the night, at five.

Frazier managed to push the Illini to six ahead with another three-pointer, but two makes from the charity stripe for Xavier Green and a Julian Reese make from three pushed Maryland toward the lead once again.

Reese has been one to go for the long-range shots, despite minimal success on the season. But the freshman hit both of his three-point attempts on the night, including one to put the Terps ahead for the first time in almost 11 minutes of game time.

Andre Curbelo responded with a jumper, but a nifty lay-in from Eric Ayala under the rim and a layup from Scott gave Maryland a bit more control after it trailed for the majority of the half.

Scott continued to thrive down the stretch. He remained a pest in the paint, scoring three layups in the final six minutes, all of which he was fouled during.

After Scott finished two free throws, the Terps amassed their biggest lead, of eight points. But as the Illini struggled to make shots, Maryland worked the free throw line and another emphatic dunk from Hart to the tune of a 16-point win.

“It just gives us confidence and it instills that we may have lost a lot of games early on, but the season isn’t over,” Scott said. “As long as you’ve still got a game ahead of you, you’ve always still got that fight left in you.”