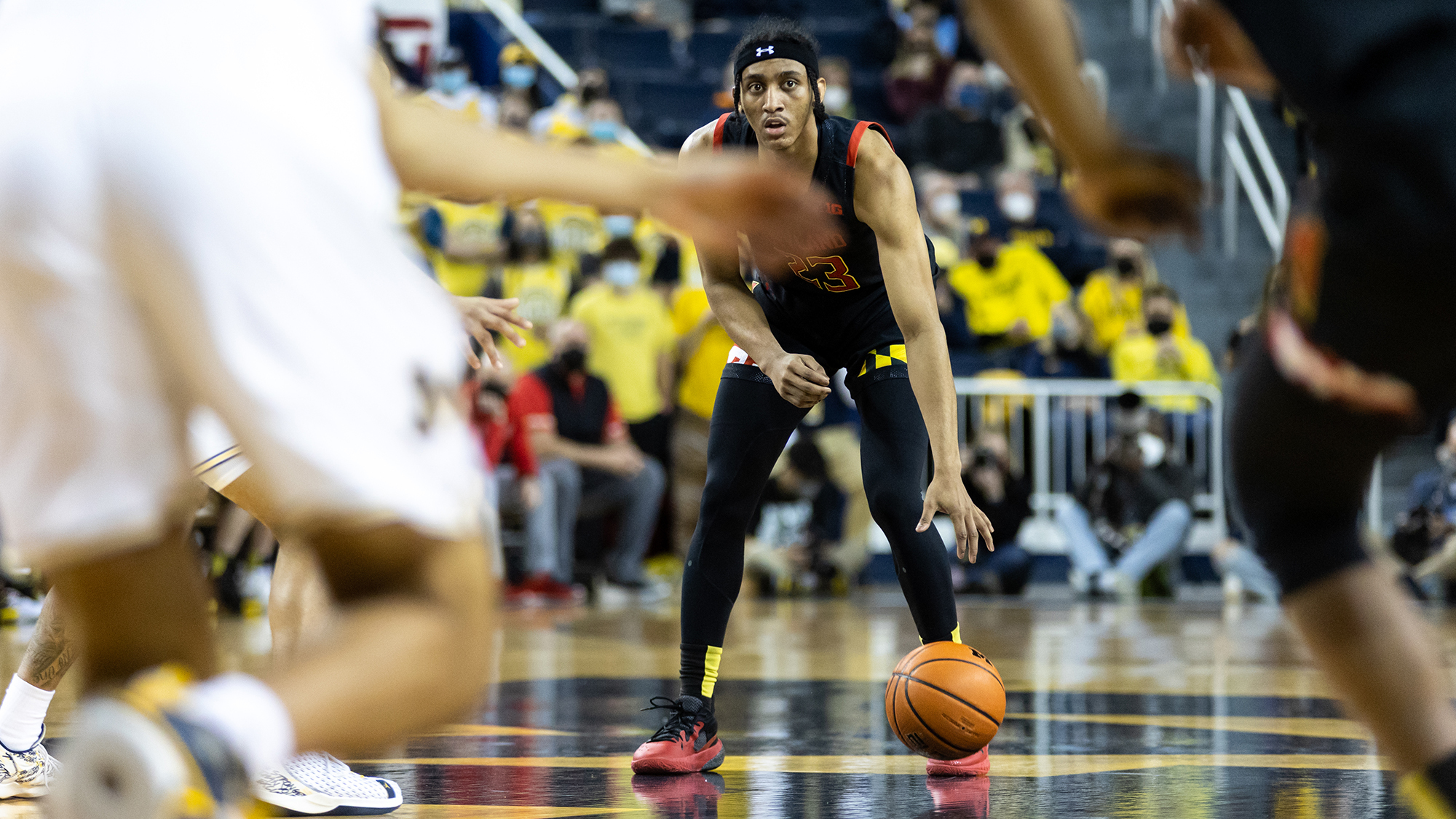 ANN ARBOR, Mich. — Maryland men’s basketball has looked shallow all season long. From game to game, its typical starting five have been just about all that brings production.

Eric Ayala, Donta Scott, Fatts Russell, Hakim Hart and Qudus Wahab account for almost 84 percent of the team’s total points. When that group is slow for the Terps, there is little that can help them recover.

Matched up against a team with the depth Maryland (9-9) desperately needs, it was all too easy for Michigan (8-7) to take advantage and score a big win over the Terps.

“We didn’t get much across the board when you look at the final score,” interim head coach Danny Manning said of his team’s 83-64 loss on Tuesday. “Collectively, not enough for our entire group.”

Russell and Hart found themselves out of the starting five for the first time all season as Manning opted to run Ian Martinez and Xavier Green in their stead.

Manning said he hopes it will serve as a wake-up call for Russell and Hart as well as a chance to see more options on the court as the season progresses and the Terps look to improve on their 1-6 start in Big Ten play.

“We need more from them,” Manning said. “This is just a way to challenge them. We’re at a point now where, we’re going to push some buttons.”

Wahab had a similar experience Saturday against Rutgers, where freshman Julian Reese was chosen for the starting spot rather than the 6-foot-11 center for the first time all season.

Martinez and Green did not rise to the occasion of their first starts in a Maryland jersey. The two played just about the same minutes they typically do off the bench and offered fairly little on either end.

Green’s stats read just one assist for 21 minutes of work, however his impact is typically felt on the defensive end. But against the Wolverines, he made no dent.

Michigan flashed scoring depth the Terps would envy with four of its starters in double-digits and solid contributions from its bench. The Wolverines’ leading scorer, Hunter Dickinson, returned from a one-game absence in time to wreak havoc on Maryland’s defense.

What would typically consist of Dickinson purely dominating the paint for rebounds and scores evolved against the Terps. He became a dime machine.

“They get it to Hunter pretty much every possession,” Ayala said. “He made good passes to get guys involved and they just made shots.”

Dickinson had a career-high six assists to go along with his 21 points and six rebounds.

Maryland came out of the gate showing a double-team on Dickinson, something it has rarely pulled out against opposing big-men. And as bodies collapsed toward the center, he sent a perfect pass to the wing to Caleb Houstan for a wide-open three.

“Now we’ve gotta do something different,” Manning said. “We came out and we threw something at them and they answered it well.”

But there was no stopping Michigan’s control on offense. When it came to the other end, it was more of the same.

Maryland’s entire output didn’t just lie on its unit of starters, it was hoisted almost entirely onto the shoulders of Ayala and Scott.

But their teammates were nowhere to be found save for a handful of scores on either side of the first-half buzzer.

Martinez — who entered the evening’s game making just one of his previous 18 shots — wasn’t able to be the sparkplug for the Terps when no one else outside those top-two of Ayala and Scott could.

“I’m just trying to start the fight in these guys,” Scott said. “Because as long as we fight, it’s really hard to compete against us when we fight and we battle.”

Maryland witnessed a deep team do everything it hopes to do more consistently. It’s only a matter of who on the team can provide support as the Terps forge on in an ever-challenging Big Ten.