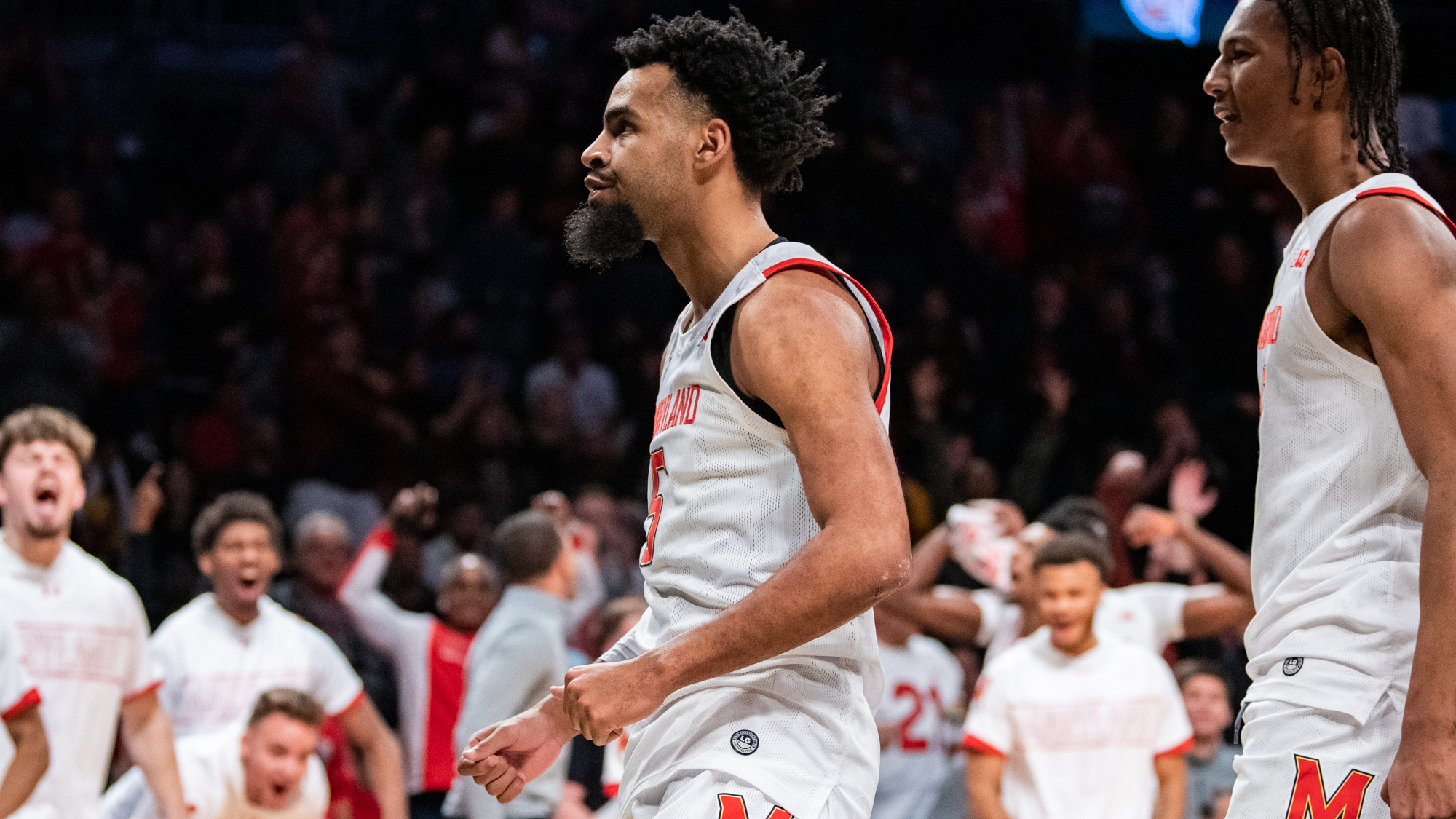 BROOKLYN, N.Y. — Tyree Appleby had a response for Maryland men’s basketball at every step. When the Terps began stringing together baskets and threatening to separate from his No. 20 Florida squad, he would be there to thrash the momentum.

With time winding down, Appleby dribbled down the court and nailed a three in Fatts Russell’s face to give his squad the lead. But Russell would be the one to respond.

Russell drove between the Gators’ defense and released a shot just beyond Colin Castelton’s arms that dropped for a crucial bucket in the final minute. His free throw dropped and Maryland only needed a score in the paint from Donta Scott to seal the deal.

The Terps leaned on a pair of 19-point performances from Eric Ayala and Russell to avoid a four-game skid and deliver the first win for Maryland with coach Danny Manning at the helm, 70-68.

“Russell and Ayala, I think, were the difference in the game,” Florida coach Mike White said.

It was as close a game as the Terps have played all season long. Maryland rarely sits more than a few points beyond or behind its opponents and a matchup with the Gators at Barclays Center was no different.

The Terps turned in one of their better shooting performances in the opening half, hitting 50% of their attempts. It was a pleasant surprise from a team averaging 41% shooting going into Sunday’s contest.

Russell got the scoring started for Maryland (6-4). The guard has typically weaved through opposing defenses to draw defenders in for a dish out to the arc. This time, Russell laid it in himself.

Russell has spent most of the season as a provider but had the chance to shine on the court in Brooklyn, New York with one of his best performances of the season that pushed his squad toward a victory over a ranked opponent.

“I just felt like I needed to do that for our team to be successful,” Russell said. “My teammates and coaches have a lot of confidence in me and it’s just up to me to go out there and just be myself.”

Florida (7-3) struggled with shooting early, going two for its first seven, but early signs of the Terps’ turnover problems kept the two on even ground for the majority of the half.

Manning’s squad compiled 11 turnovers in the first half, a problem-point throughout the afternoon. The Gators quickly found that Maryland struggled against their full-court press, so they persistently pestered them with it.

“You want to attack pressure,” Manning said. “I thought when we attacked pressure we put them on their heels.”

Maryland found success beyond the arc with makes from Ayala and Scott giving the Terps a slight edge through the first 12 minutes.

But as the Gators crawled their way out to a slight lead, Hakim Hart stepped in to make some of the biggest impact of the opening period.

A nice pass to Hart from Scott below the rim gave him his first points of the game and in a matter of minutes he’d find another from in the paint. Hart worked his way out of a double team and finagled a shot past his defenders and into the basket while taking a foul.

After sinking his free throw, Hart wasn’t done. He’d hit a three in response to Phlandrous Fleming Jr ‘s make on the other end.

A pair of free throws from Ayala gave Maryland the largest lead of the first half — at just five points — but Florida made three of the final four baskets to tie the game, 33 apiece, at halftime.

Russell got things started once again out of the break with yet another drive to the basket. He followed it up with a three in the start of a strong half for the fifth-year.

Ayala responded with his own makes from down low and on the perimeter to put the Terps on an 8-0 run. Russell hit one more three before exiting the court with eight points to his name in the still-young second half.

The Gators weren’t making shots from the field consistently, but they were attracting fouls from Maryland. With over 13 minutes remaining, they had reached the bonus. The Terps had been in control of fouls in the opening half, getting nine tries from the line to Florida’s two.

Maryland continued to struggle against the Gators’ press down the stretch, forcing the Terps into fouling on their own end and inbound violations that led directly to points for Florida.

The Gators took advantage of Maryland mistakes to pull within one on back-to-back threes from Appleby. But it was Ayala’s turn to get the Terps in the drivers’ seat.

A layup followed by a drive to the basket put Maryland ahead by six once his and-one foul shot sank.

Russell and Ayala continued to play well in clutch-time scoring nine straight Terp points. The streak was finally broken by Scott, who made the go-ahead basket with 16 seconds left on the clock.

“It means a lot. We’ve been through a lot, a lot of adversity,” Russell said. “But we stuck together, I felt like that was the main thing. We had a lot of meetings, heart-to-heart meetings, told each other that we were going to go for this thing, stay together, fight this out.”