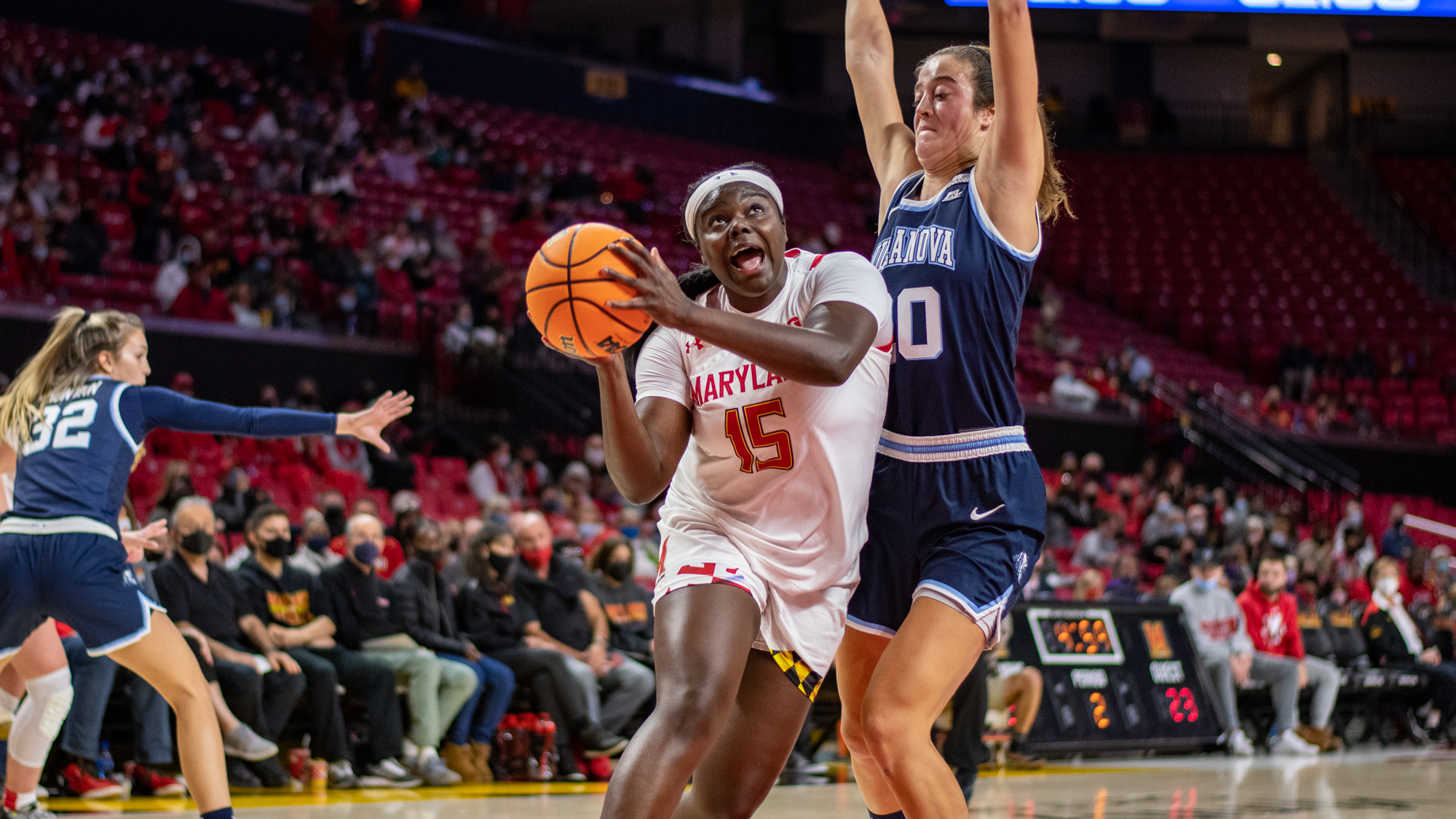 Ashley Owusu goes up for a shot during Maryland women's basketball's 88-67 win over Villanova on Nov. 12, 2021. (Joe Ryan/The Diamondback)

Maryland women’s basketball’s last loss to Ohio State served as a wake-up call to a team that used the lessons from the game to go on a run to end the regular season.

This year, the Terps’ 95-89 loss is the second straight for a team that already has double the losses it did last season. And the No. 25 Buckeyes were led by a triumphant performance by an ex-Terp.

Taylor Mikesell, the former Maryland guard, played the Terps for the first time since she transferred after the 2019 season and put on a prime performance — she scored 33 points, largely off the strength of five three-pointers.

The Terps played this game without coach Brenda Frese, who is attending funeral services for her father, Bill Frese, who recently passed away. Associate head coach Karen Blair served as head coach for this matchup.

“I think we have lapse of focuses,” Blair said. “Everybody knows we like to switch a lot… within that switching you can’t be late and we’ve got to be able to get out there.”

Despite the Buckeyes’ near-constant lead, the game wasn’t a blowout. Midway through the fourth quarter, the Terps had cut the lead to just seven. But from there, Ohio State took control. The teams traded baskets until Mimi Collins took a contested three-pointer that clanged off the rim.

Ohio State’s Jacy Sheldon scored at the rim on the next possession. A double team off the inbound left Katie Benzan with no options as she was trapped on the sideline. The play resulted in a turnover and an uncontested layup for Mikesell that extended the lead to 12.

That lead proved to be just enough cushion, as a late 15-9 Maryland run still left them short at the end of the game.

“I was really proud of that fourth quarter and the fight that we had in that because I mean we all just want to win at the end of the day,” Bibby said. “But we gotta string four quarters of that together and I think we’ll be okay.”

Coming out of halftime, the Terps went on a quick 6-0 run to cut their deficit to just two. But after Maryland clawed back to close in on Ohio State’s lead, it couldn’t sustain that level of play. The Buckeyes came back with a 16-6 run on their own, including a pair of buckets from Mikesell.

That was a familiar script in the game — each time the Terps got within striking distance, the Buckeyes shoved them back out of an arms reach.

“We’re still having these little slip-ups that we’re allowing other teams to go on the run and we’re still not defending the three-point line to the level that we want to,” Blair said.

Maryland’s offense struggled for large chunks of the game before erupting late in the fourth quarter, as Chloe Bibby made three straight shots from deep to prolong the matchup’s intrigue.

Bibby, Benzan, and Angel Reese combined for 58 points and were the primary offensive engines for the Terps.

With under ten seconds left, Benzan fouled her sharpshooting predecessor Mikesell and fouled out of the game. Mikesell made both of her free throws to down Maryland and break her previous career-high.

“Taylor is obviously a great player we’re obviously familiar with her. But for us our preparation was it was another three-point shooter,” Blair said. “I thought [Jacy Sheldon] created a lot of easy shots for Taylor today and credit to Taylor for knocking them down.”

Sheldon scored 24 points and added 10 assists for the Buckeyes.

After falling to Ohio State, Maryland has dropped games against the top-three teams in the Big Ten and falls to 1-6 in matchups with ranked opponents this season.

“There’s areas of improvement of course,” Bibby said. “But today I think we got a little bit, one percent better just in that area of competing and wanting to win, being hungry for it.”