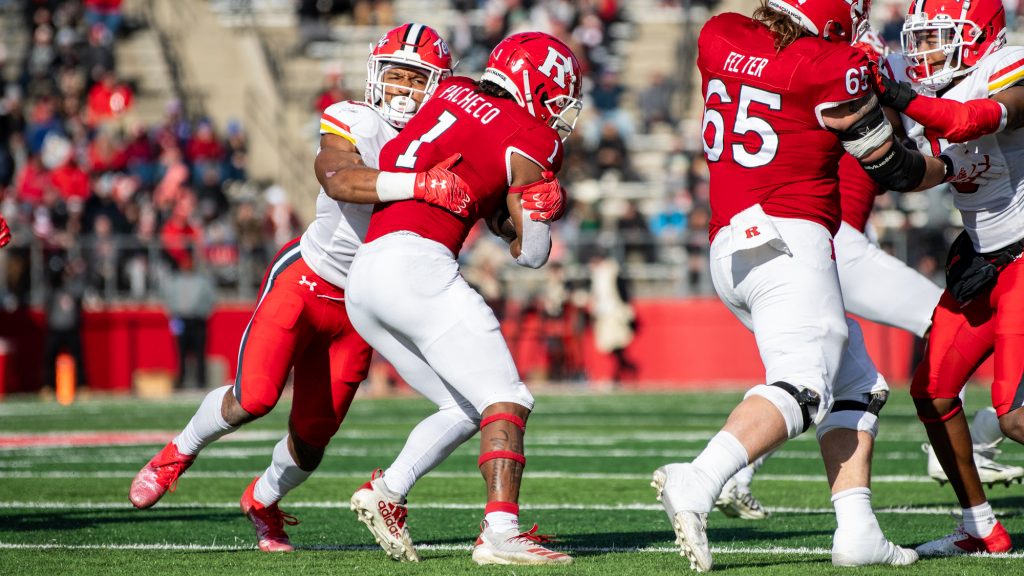 Maryland football had its most successful season since 2016, earning a trip to a bowl game. Now, several Terps have received recognition from the Big Ten for their efforts.

Okuayinonu started all 12 games for the Terps and recorded a team-high six sacks and 8.5 tackles for loss. He was also an honorable mention selection by the media.

Four other defensive players received all-conference honorable mention selections by the coaches, media or both.

[After becoming bowl eligible, Maryland football has taken its ‘next step’]

Those five were joined by six players on the offensive side, all of whom earned honorable mention accolades.

Taulia Tagovailoa registered one of the best seasons by a Maryland quarterback in program history, setting the single-season program record in passing yards and completions. He led one of the most prolific passing attacks in the conference, turning out seven 300-plus-yard passing performances and delivering 24 touchdowns.

Helping him were wide receivers Dontay Demus Jr., Rakim Jarrett and tight end Chigoziem Okonkwo, each joining Tagovailoa as honorable mentions. Demus hauled in 507 receiving yards and three touchdowns in five games and was set to be a top receiver prospect in the upcoming NFL Draft before tearing his ACL on a kick return against Iowa.

Jarrett filled in with aplomb, leading the team with 769 receiving yards on 56 catches and five touchdowns. The speedy sophomore became the focal point of the receiving corps as several of the weapons around him were befelled by injuries.

[Maryland is going bowling: 40-16 win over Rutgers sends Terps to first bowl since 2016]

Okonkwo returned from a year off and got stronger as the season progressed, eventually becoming a key contributor as the tight ends became more involved in the offense. He recorded five touchdowns, tying for the team lead with Jarrett and 433 receiving yards.

Spencer Anderson and Jaelyn Duncan, meanwhile, anchored an offensive line that was quietly one of the Terps’ most improved units.

Now, they all have one last chance to end their year strong with a postseason victory.