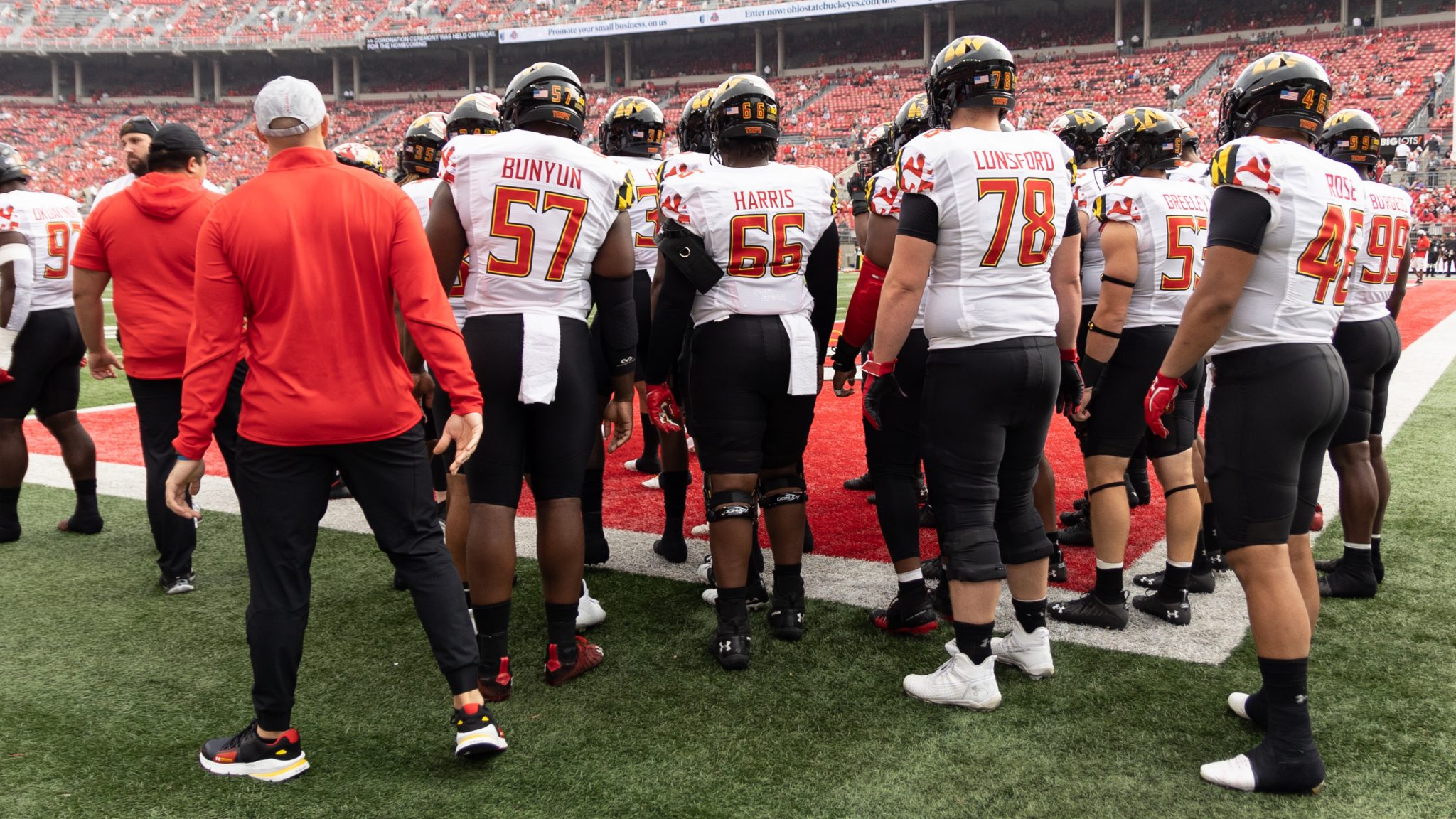 Maryland football players walk onto the field prior to 66-17 loss to Ohio State on Oct. 9, 2021. (Julia Nikhinson/The Diamondback)

As Maryland football slumped out of Ohio Stadium nearly two weeks ago, battered, bruised and deflated, the Terps were left to self-evaluate. A hot 4-0 start came crashing down against two of the Big Ten’s best in Iowa and Ohio State, and with it came a pile-on of injuries.

No group was ravaged worse than the defensive backs.

Maryland entered Columbus, Ohio, down its top three cornerbacks, and the last-minute replacements could not keep up with the Buckeyes’ explosive receivers. The corps was eviscerated for 432 yards and five touchdowns through the air, and the lack of depth was exposed.

“Especially going against one of the best receiving corps in the nation, you got to have some good cornerbacks,” defensive lineman Sam Okuayinonu said after the Ohio State loss. “We’ve had a lot of injuries in that room. But it’s no excuse.”

So, the bye week following that disaster could not have come at a better time for the defensive backs to get healthy.

As the group remains in flux, some of the injured starters could return Saturday and bring reprieve to the damaged unit. But if they remain out, a hodgepodge of inexperienced players will have to turn the group around.

Their first chance to do that comes against Minnesota.

The Golden Gophers pose a lesser vertical threat than the Buckeyes, sitting second-to-last in the conference in passing. Top wideout Chris Autman-Bell and quarterback Tanner Morgan have returned, but they’ve each regressed from the heights of their past two seasons. The rest of their offense is serviceable but unspectacular.

It will be a telling litmus test. If it holds Minnesota down, Maryland might be able to build off of a young unit. If they’re exposed by the Gophers’ weak attack, though, the Terps will remain hollow in the secondary, easily exploitable until their injured players return.

“They play core, they’re gonna get beat,” coach Mike Locksley said. “Those were challenging matchups for young players, but that’s why we recruit them here.”

Either way, Locksley’s squad could benefit from having their top corners. Deonte Banks is still recovering from shoulder surgery, and there’s no timetable for his return. But Jakorian Bennett and Kenny Bennett might bring more immediate relief. They both practiced this week, and Locksley said they’ll be game-time decisions.

If they can’t suit up, Lavonte Gater, Corey Coley Jr., Beau Brade and Dante Trader Jr. will enter into the rotation to fill the gap, as they did against Ohio State. With extra practice and an additional week of rest, they should be able to ease into their roles and feel more comfortable against Minnesota.

And their veteran mates in the defensive backfield are there to guide.

“You just got to bring them along, just coach them like you would any other person,” safety Jordan Mosley said. “It’s really all about confidence at the end of the day. If you play with a lot of confidence, you’re gonna be good.”

Even as Maryland remains battered and bruised, it ventures to Minneapolis with confidence and a major opportunity. It can override the stain of that shellacking at the hands of the Buckeyes and start the back half of its schedule fresh with a strong showing against the Golden Gophers.

It’s especially important for those defensive backs, who, as tattered as they are, have the most to prove. If they fade, it could be another deflating slump out of the stadium.

“They’ve got to keep their confidence,” Locksley said. “It’s our job as coaches to make sure that we’re doing things that they can execute that allows them to be their best.”