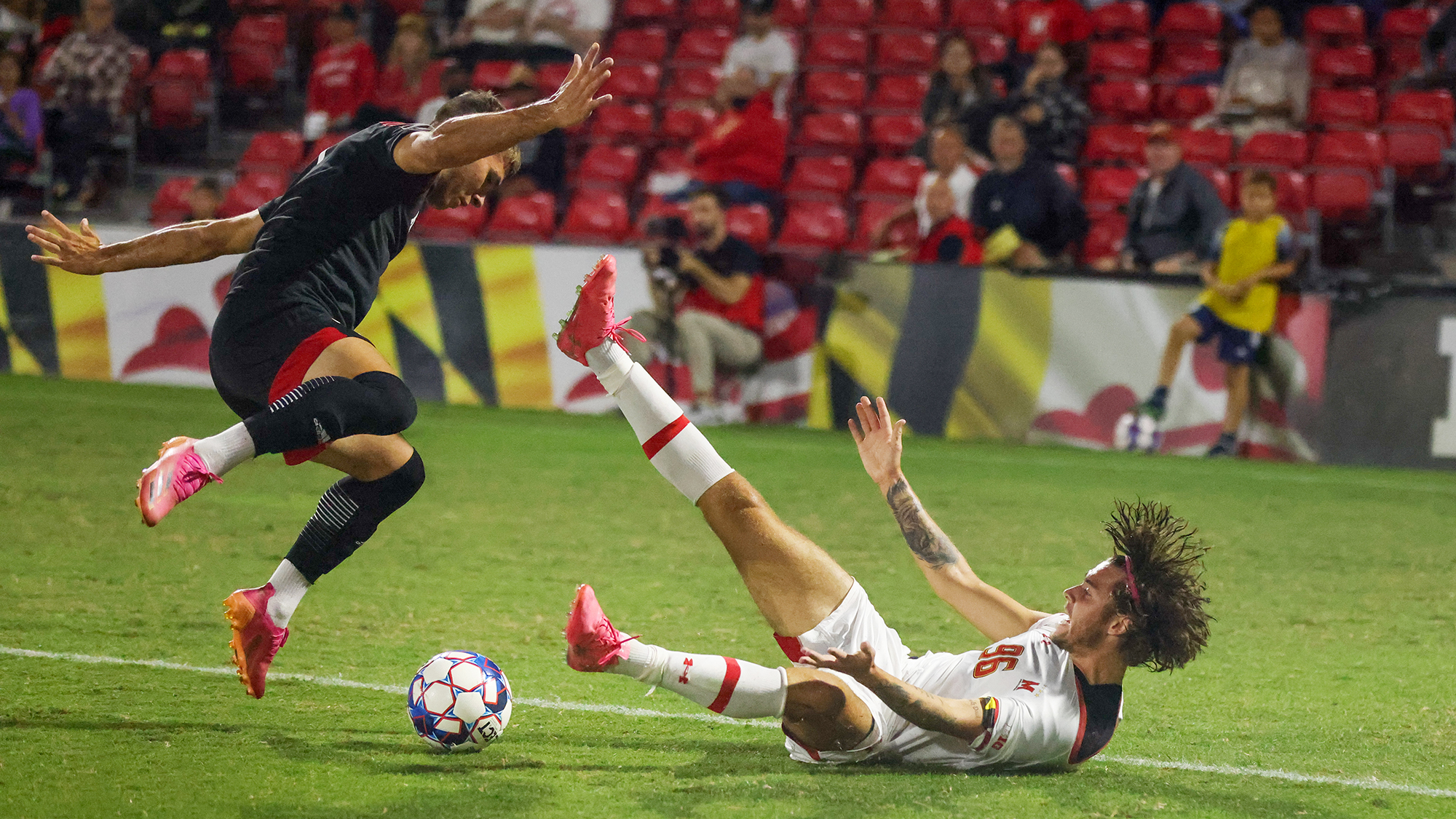 William Kulvik gets taken down and looks for a foul during Maryland men’s soccer’s 0-0 draw with Rutgers on Sept. 28, 2021. (Collin Riviello/The Diamondback)

Through both matches, the Terps have come up short on converting valuable opportunities and slumped on offense. That has contributed to an offense that hasn’t quite been able to honor its valuable defense these past couple of games.

“We’ve just got to find the right balance of getting their legs and minds in the right place,” coach Sasho Cirovski said. “There’s not that much more that needs to be done. It’s just a matter of freshening up the legs and the minds and being ready for the next one.”

But against Wisconsin, the inadequacies on offense had deeper roots.

Freshman defender William Kulvik went down in the 41st minute and had to be helped off the field as he placed subtle pressure on his legs. Kulvik had been one of the better new additions to Maryland’s back line, and many of his teammates lauded him for his athletic ability on an already-formidable back line.

“William’s done very well,” midfielder Malcolm Johnston said. “He’s been a real anchor back there. His pace is second to none.”

Kento Abe took Kulvik’s place as the first half closed, but the Terps would have to play without one of their anchors on defense.

And as the next half dawned, the Badgers took advantage just a few minutes in with colorful passing that had Maryland scrambling. The final bounce went straight to a Wisconsin striker who, while sitting directly in front of Abe, then buried the winning goal.

The striker gained inside position on Abe, and it was all over from there. To add insult to injury, the Terps also lost Brett St. Martin to a red card in the 77th minute to all but put away their chances of placing enough pressure on the goal to bury one.

Outside of the happenings that pressed the odds against Maryland during the match, there were efforts to jump-start a lately-stagnant offense.

In what was likely an effort to mix things up, Cirovski started freshman forward Caden Stafford for the first time since Maryland’s four-goal game against UMBC. Stafford then proceeded to play 50 minutes without logging a shot in the defensive tilt.

It’s easy to speculate what may be stuck in the gears of an offense that hasn’t been performing up to par, but it remains difficult to find the exact cause.

“I think our sharpness passing, our division of space in the final third, I think needed to improve,” Cirovski said of his team’s struggles against Rutgers. “We spent a couple of days now working on becoming sharper and more cohesive in our movement up top.”

But despite all that, the Terps remain 7-2-1 and 2-1-1 in conference play. Fixing what may or may not be broken could result in a very real tumble down the standings.

“You can nitpick here and there for errors and good things throughout every game, but we just try and keep an overall highest standard through all of it,” defender Chris Rindov said.

For now, that standard has been heavily challenged by Maryland’s Big Ten rivals, and time will tell if the Terps lower that standard or rise to the challenge.