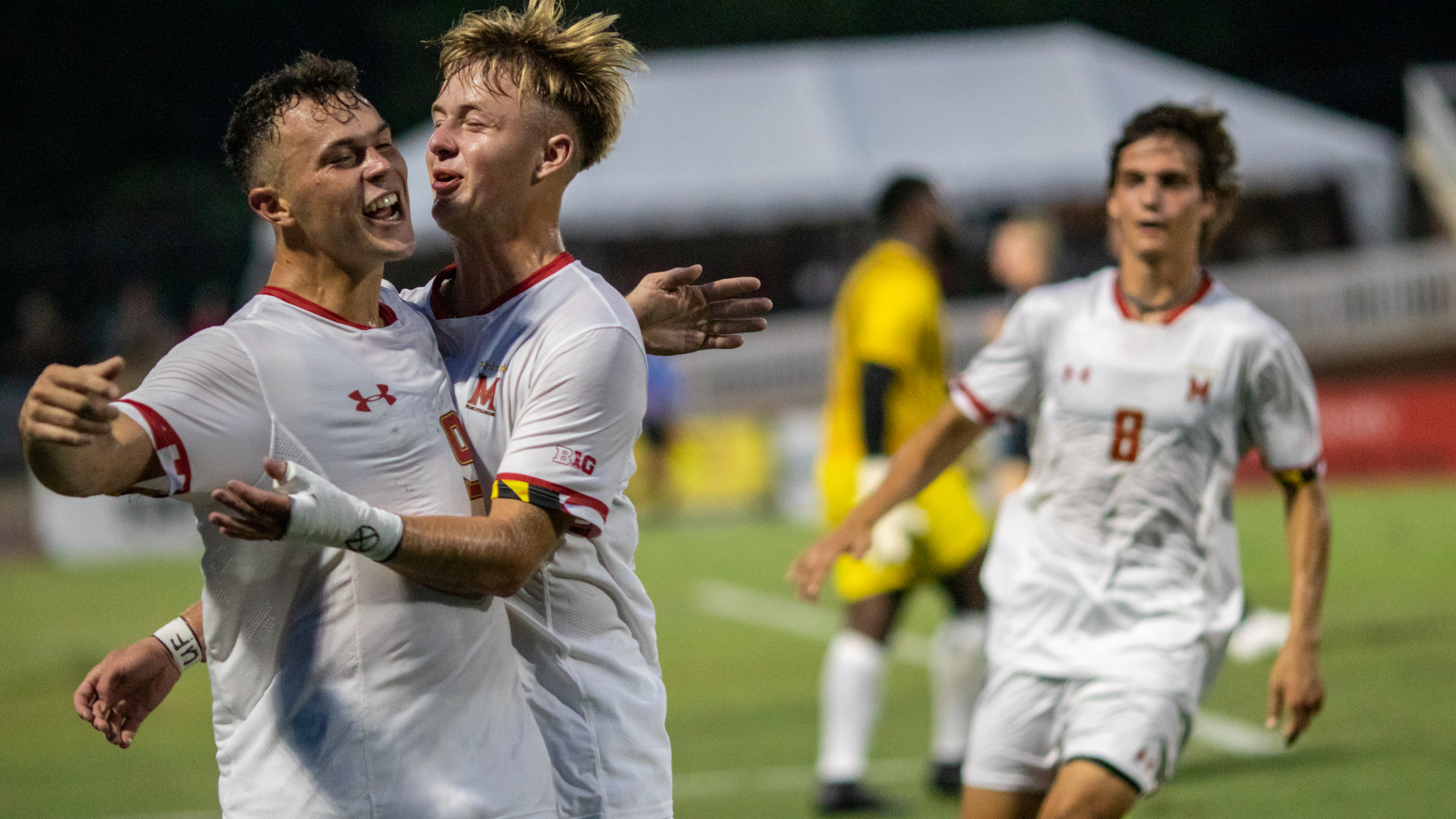 Maryland's Justin Gielen celebrates his goal against UMBC during the Terps' 4-3 win over the Retrievers on Aug. 29, 2021. (Joe Ryan/The Diamondback)

Stepping towards daylight, Justin Gielen split two UMBC defenders, gathered the ball and squared up the goalkeeper. Sending the ball on the tight angle to the right goalpost, Gielen snuck Maryland men’s soccer’s first score of the game home.

And that set the tide loose. Three first-half goals, plus a late fourth strike, propelled coach Sasho Cirovski’s squad to a high-scoring 4-3 win.

Nothing came easy in this in-state rivalry between the Terps and Retrievers, and everyone had a will for the goal.

Mere minutes after the ball rolled off the midfield circle, Gielen hopped over scrambling goalkeeper Quantrell Jones and fired a wide-open shot that was blocked by a defender. Gielen would later score the opening goal in the 17th minute.

Scrambling to respond to Maryland’s opening goal, UMBC barely let the sting of a filled net rock them. Dribbling the ball on a fastbreak the other way, the Retrievers slammed a response home in the 18th minute.

“We didn’t handle the mental moments after our goals very well,” Cirovski said. “We give up a goal in the first half on a sloppy giveaway on a counter attack, and to UMBC’s credit, they never gave up.”

While UMBC applied additional pressure in the wake of its equalizer, nothing came to fruition as both squads came to an equal struggle for possession. But as both teams reserves trickled onto the field, that changed.

“We’re a team that has talent. We pride ourselves on our depth,” Gielen said. “Being able to rotate guys and not have the level drop off is very important, and it’s something we’re gonna look to continue to hold onto.”

Sprinting under a high throw-in, Ben Bender squared up Jones and found the net in the 33rd minute. Four minutes later, Malcolm Johnston joined the party as he took a pass from Jacen Russell-Rowe to the net.

A commanding 3-1 Terps lead cut down the confidence the Retrievers had exuded early. And the first 35 minutes of the second half reflected that.

Cirovski’s squad dribbled at will on UMBC’s third of the field as its defense kept the Retrievers out of the attacking side. A fourth Maryland goal in the 81st minute by Russell-Rowe appeared to ice the game.

But Ryan Becher responded quickly for UMBC to keep the Terps uncomfortable late. Another strike by Becher minutes afterwards kept the match interesting in its waning moments. The Retrievers’ resurgence gave them a shot to steal a late draw.

But no dice. Maryland fought to keep its one-goal lead and walked away with a 4-3 win to put them at 2-0 on the young season.

“The last six minutes we give up two goals … we just got to be better than that, we just have to be stronger, we have to be more confident, we have to play cooler,” Alex Nitzl said. “But at the end of the day, it’s a win.”