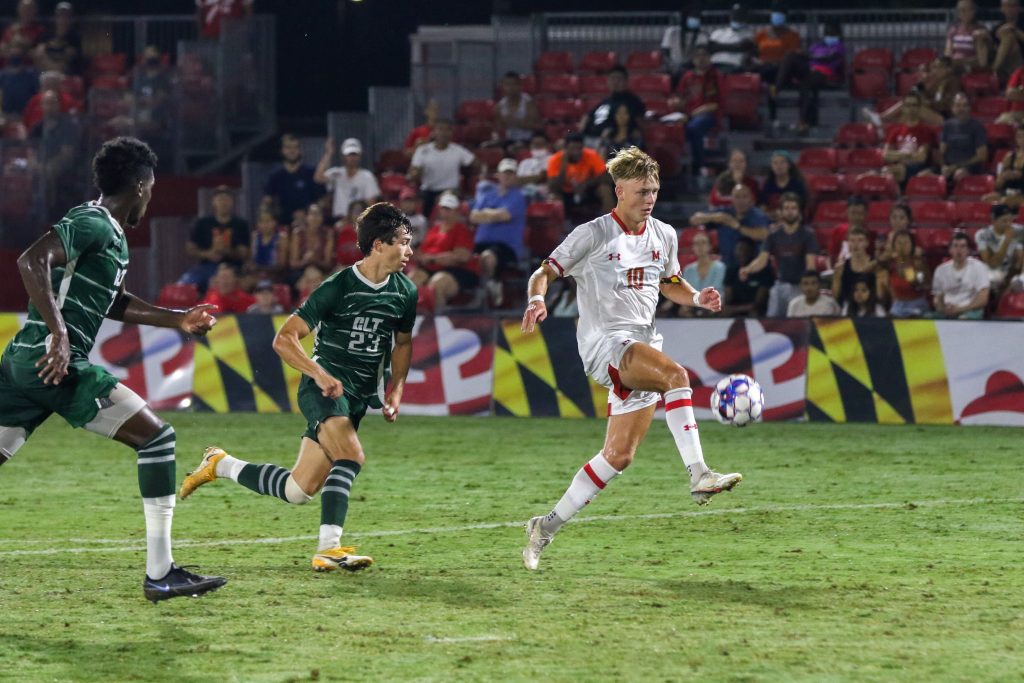 Frustrated and fed up chasing Maryland men’s soccer down the pitch, a Charlotte 49er made an exasperated tackle of Caden Stafford as he advanced down the pitch.

A whistle rang out, and a red card was raised.

Both squads had fought hard to claim an opening night victory, and after narrowly missing the chance to secure a no-doubt winner, Stafford found himself with a yellow card of his own.

But, even with tensions running high, the Terps prevailed.

Capitalizing off a late first half goal by Stafford, coach Sasho Cirovski’s squad ran away with a 1-0 triumph, upsetting No. 18 Charlotte.

Delayed by storms in the area, Cirovski’s squad had to wade just a bit longer in anticipation for the start of their season.

And from opening kickoff, it was apparent that the aggressive Terps wouldn’t let the ranked 49ers take much from them.

“We needed to be gritty today and I thought we showed a lot of grit,” Cirovski said. “This is the kind of fiber I want our team to be made of,”

Both sides skirmished in the early goings to stalemates on either end of the pitch. That is, until Nick Richardson took the ball and danced between multiple defenders, and took a solid shot to the opposite side of the net that was deflected by the opposing keeper.

The serious challenge gave way to Stafford’s substitution in the 25th minute, and the freshman made an impression.

With the ball spinning and looping down towards the ground, Jacen Russell-Rowe placed his foot out, popping the ball back in the air. Stafford tracked the ball through the air and received it in the clear, before gently propelling the ball into the opposite side of the goal.

“Me and Jacen haven’t even played on the field together,” Stafford said. “It was nice [that] right away we had that connection to make it happen right away.”

The orchestrated advance by the Terps placed the exclamation point on a somewhat one-sided half. The half ended with Maryland on top, as the freshman forward supplied the only goal of a contentious first career game.

With a new half upon both teams, neither squad was content with a change of pace. The Terps stayed with the same aura of vigor they showcased in the first period. Four shots on goal challenged 49ers goalkeeper Daniel Kuzemka from keeping Charlotte’s deficit steady.

Jamie Lowell faced a quiet night at the goal as Maryland’s offense put pressure on the other end of the pitch. The tense matchup continued to chip away at each team’s patience as the matchup drew to a close.

“We limited a very good attacking Charlotte team to very few opportunities,” Cirovski said. “I think our depth showed tonight and we were able to rotate some guys and I think we eventually were able to wear down Charlotte.”

The yellow cards went flying toward the end of the match, with each team seeing three in the second half. After Sawdon saw a second yellow raised above his head, he began walking toward the bench, with his night done, earning a red in the 79th minute.

“We definitely didn’t want to get complacent with it, even with them a man down,” Chris Rindov said. “… we just tried to stay focused as much as we could five minutes after that red and just play our game.”

With a man advantage, the Terps began amping up the pressure again. It was Richardson who began weaving through Charlotte’s defense, finding an opening on the far side of the box, when a 49er knocked him to the ground, conceding a penalty to an already advantageous Maryland.

The ensuing shot from Joe Suchecki was low to the keeper’s left, exactly where Kuzemka made his dive, keeping the 49ers’ hopes alive for the time being.

But, the time had run out for Charlotte, as the Terps ran the clock down, and cemented a win to begin their season.

“For me, it’s a special night,” Cirovski said. “To have the fans back after what all of us have been through over the past 18 months, it really created a first sense of normalcy in a long time.”