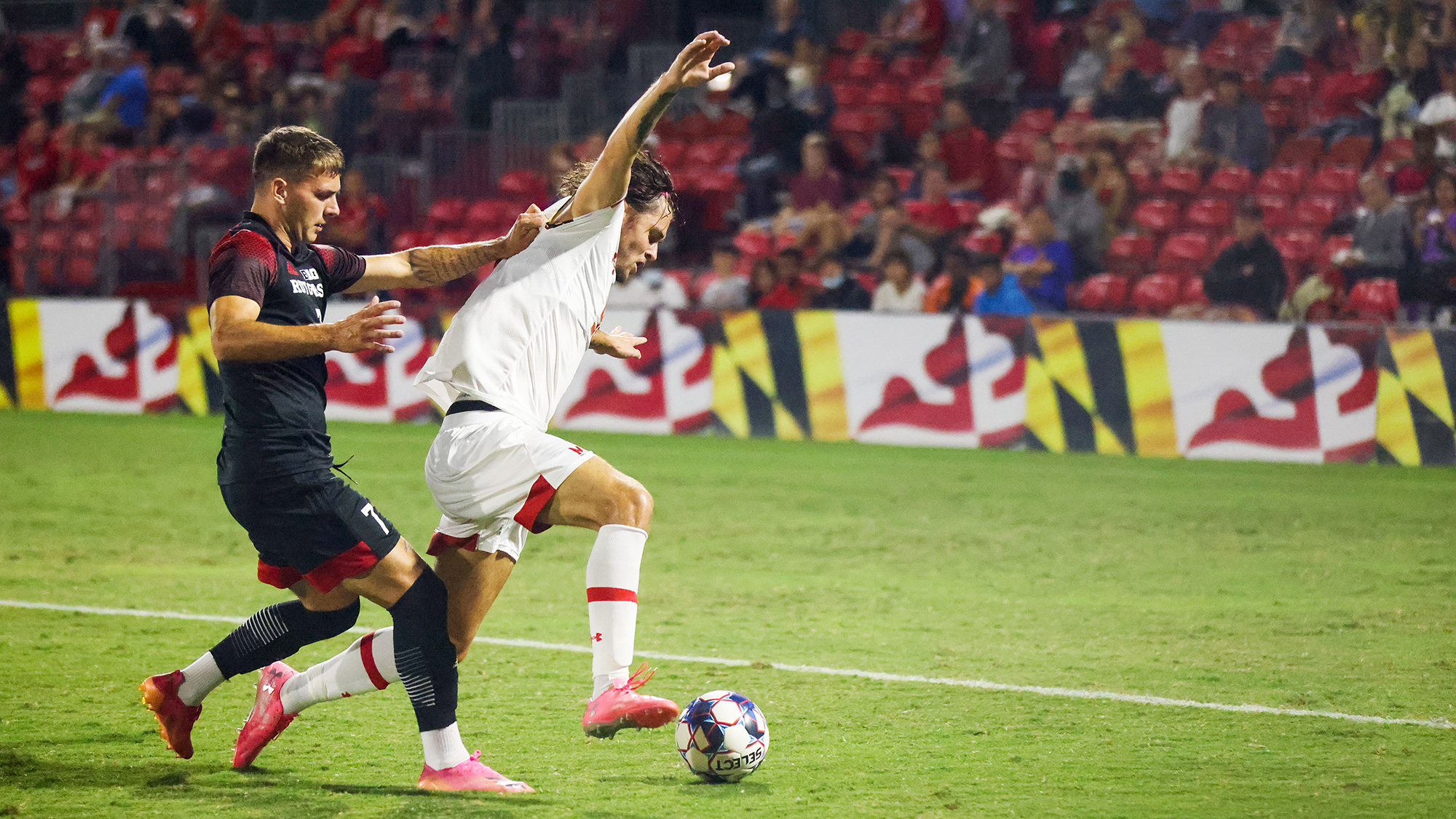 Maryland’s William Kulvik tries to get around a Rutgers defender during the Terps’ 0-0 draw with the Scarlet Knights on Sept. 28, 2021. (Collin Riviello/The Diamondback)

Justin Gielen looked as if he had given everything he had.

The senior had just received a victory-lined opportunity as he broke free from a defender to head the ball. But he wasn’t on the mark. Gielen’s ball sailed high and he sank to the grass as he came up short.

Frustrated by an ironclad Badgers defense, No 8. Maryland men’s soccer suffered its second shutout defeat of the season, 1-0.

“Certainly not the result we wanted,” Coach Sasho Cirovski said. “Wisconsin’s a very tough team and I thought they executed their gameplan very well, caught us on a couple of counters.”

A hard-nosed Big Ten conference matchup was on tap as Maryland looked to break Wisconsin’s momentum — the Badgers have won four of their last five games.

The highly-ranked Wisconsin defense played up to standards early, and Maryland struggled to string together quality possessions. Joshua Bolma was even stripped of the ball on one possession as he had an ideal angle to the goal to take a quality chance.

The explosive Bolma and the rest of his squad struggled to find scoring opportunities. The Terps managed just four first-half shots and none that placed the Badgers’ keeper in danger of saving a shot.

“We had a couple of these good chances, didn’t put them in. On the road, you got to put away the few chances that you get,” Cirovski said.

Maryland goalkeeper Niklas Neumann found a bit more work as the Badgers launched a pair of shots that needed action. One chance saw Wisconsin midfielder Ignasi Marques go airborne for a shot that went off the top of the goal. Outside of those few opportunities, Wisconsin also struggled to generate offense in the first half.

For the Terps, it seems they would have a similar defensive boxing match as they did against rival Rutgers in the days preceding.

It appeared that Maryland would take the initiative going into the second half with an early chance by Bolma. That facade would fade quickly as Wisconsin finally awoke on offense.

The Badgers’ keeper Adir Raphael punted a long ball to a waiting header on the other side of the field. Wisconsin strung together a few productive passes before an opposite-field one resulted in a hard chance off Neumann’s hands.

The ball rebounded and landed in the perfect spot for the Badgers.

Andrew Akindele scrambled and tapped the flying ball in for the first goal Neumann has allowed since the 66th minute against Ohio State.

“He made the initial play,” Cirovski said. “The ball just took a bounce perfectly to one of their best attacking players and he finished it.”

The reeling Terps were forced to watch as the Badgers erupted in joy, possibly not knowing if they would touch the opposing net with the struggles they had to that point.

And that sentiment would rock Maryland as they continued their first-half woes in the aftermath of the Badgers goal. The lifeless Terps offense went without a shot in the next half-hour as the once formidable offense went stagnant. And the frustrations continued to grow.

“[After] a tough game against Rutgers, we played a team that was off for eight days between games. I think that especially in the second half we saw some of legs weren’t quite there,” Cirovski said. “Hopefully we’ll be on the same calendar as our next opponent after today.”

Defender Brett St. Martin was presented with a red card in the 77th minute after he inflicted a hard slide tackle and argued with the referees repeatedly.

Whatever chance remained for the Terps to rebound, looked more than snuffed out. And it was, as Maryland came up short on a last-second blitz to the goal and fell to the Badgers 1-0.

“Now we have to regroup and get ourselves ready for an important game against Northwestern on Friday. That’s all we’re focused on right now,” Cirovski said.