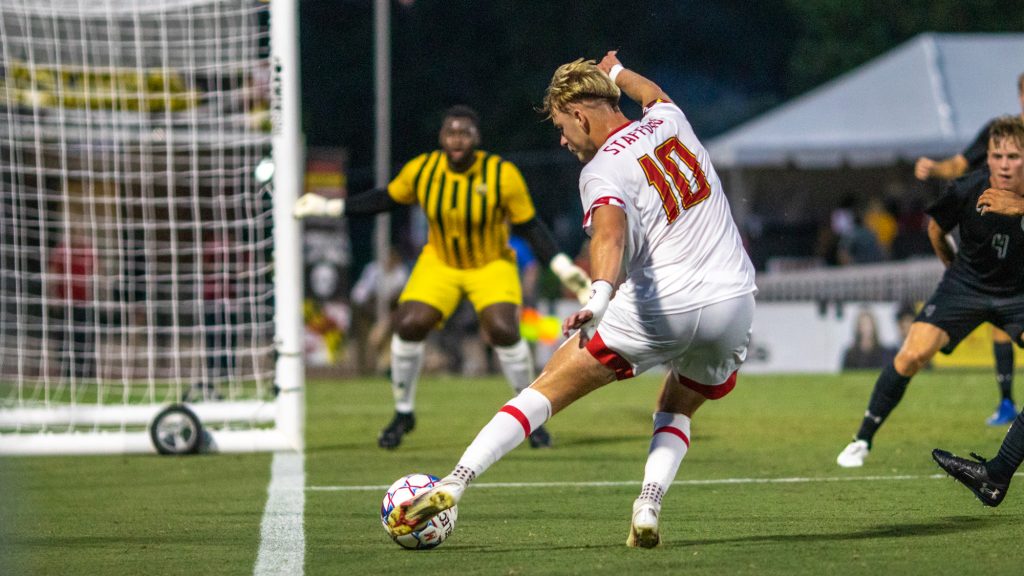 Unlikely is the word that comes to mind when looking at Caden Stafford’s opening goal of the season.

The 17-year-old was playing in his first collegiate game for Maryland men’s soccer, didn’t find a spot in the starting lineup, and yet managed to launch one home with a great pass from Jacen Russell-Rowe.

The series of events included a long rainbow pass from Richie Nichols to Stafford’s foot, his pass to Russell-Rowe and a quick arching shot to the streaking forward — setting him up to poke the ball into the goal.

That goal and his collective play in men’s soccer’s upset of No. 18 Charlotte likely earned Stafford a starting spot against UMBC. While Stafford didn’t replicate his scoring effort, he managed to impress his teammates.

“He’s a very, very talented player,” Alex Nitzl said. “Everyone who saw him playing today or even the last games [says Stafford’s] got a lot of talent in him.”

Nitzl seemed particularly complimentary of the young striker, which is a lot coming from a sophomore defender who started his first season in College Park as well.

“He’s very young, I hope he stays like this. He seems like he’s not thinking about what he’s doing, he’s just playing,” Nitzl said. “He’s just having fun out there and I think that’s what we need.”

But the Terps’ 2-0 start doesn’t just lie with Stafford. It sits with the depth that Sasho Cirovski’s squad has flaunted over their first 180 minutes of the season.

The involvement in Stafford’s premiere goal is just the beginning of what their diverse attacking unit can put together.

Between Nichols, Stafford and Russell-Rowe, none were starters against Charlotte, but the freshmen Nichols and Stafford earned their first starts days later. Russell-Rowe didn’t, but he added a goal and an assist off the bench against UMBC.

The future is promising for the Terps with several of their younger players standing out. They’ll complement established players this season in Brett St. Martin, Malcolm Johnston and Ben Bender, and it looks like many players on the roster will be interchangeable starters.

“I don’t know if I have necessarily starters, I have lined up players,” Cirovski said. “With these games with the heat and the games coming so close together… it is our intention to keep rotating the front players.”

And that strategy has been on display. Five different players have netted for Maryland so far this season.

Their depth allows the Terps to get healthy and, hopefully, prevent the injury bug that has haunted them in past seasons. With Stafford and other new additions in the picture performing, Maryland has opened the season looking healthy and dominant.

“We’ve had so many key players injured and out in both the last two seasons … this year we have some real talent and we have some real depth right now,” Cirovski said. “If we can somehow keep them sharp and keep them healthy, I think we’ll continue to be a force.”