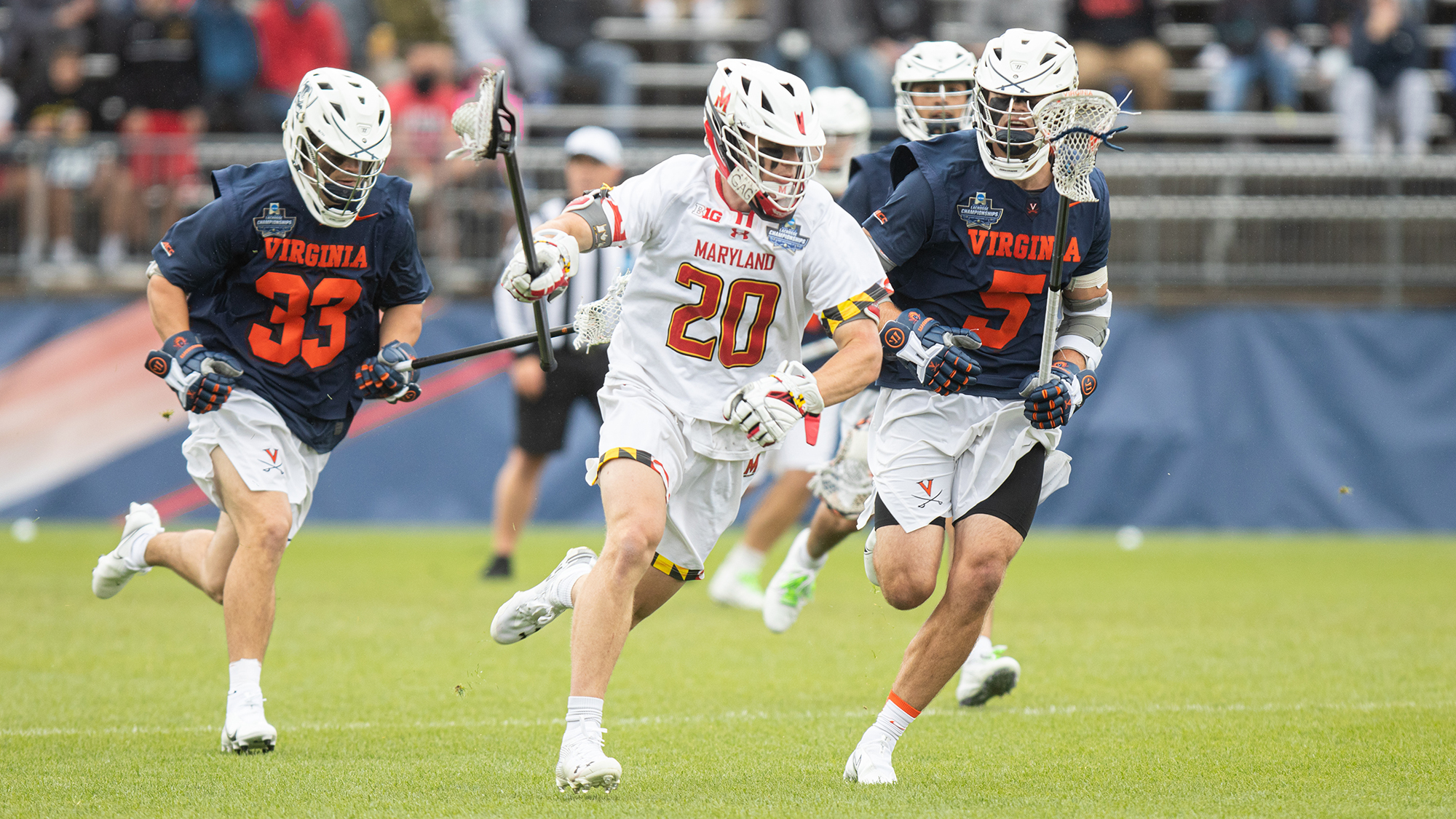 John Geppert rides down the field during Maryland men's lacrosse's 17-16 loss to Virginia in the national championship game on May 31, 2021. (Julia Nikhinson/The Diamondback)

Luke Wierman won his 14th faceoff of the game, and he immediately picked up the groundball and bustled toward the cage with less than 10 seconds remaining on the clock. Wierman reared back and fired a shot into the ribs of Virginia goalie Alex Rode.

The Cavaliers cleared, and the buzzer sounded. Maryland men’s lacrosse suffered its first loss of the season in the national championship game.

Trailing 16-11 in the fourth quarter, the Terps climbed all the way back within one score before ultimately falling, 17-16. Virginia took home its second straight national title, while Maryland fell in the championship game for the fifth time under coach John Tillman.

The big stage got to both teams early on, and the Terps and Cavaliers started a combined 0-for-12 on shot attempts. Virginia had back-to-back man-up opportunities when Roman Puglise and Brett Makar ended up in the box for interference, but Maryland squashed those chances.

When the Terps got back to full-strength, the offense picked up. Daniel Maltz, who didn’t net a goal in the semifinal game, was the first to strike. The two teams traded goals until Joshua Coffman and Logan Wisnauskas went back-to-back to put Maryland up 4-2.

The last two goals of the opening frame went to the Cavaliers, including an equalizer from star freshman Connor Shellenberger.

The majority of the second quarter was dominated by Virginia, as Lars Tiffany’s squad netted the first four goals of the period. Shellenberger added his second goal to make in 7-4, and junior Jeff Conner picked up a groundball and fired an underhand shot past Logan McNaney to put Maryland down by four.

Following a career-high 17 saves against Duke on Saturday, McNaney had a shaky first half, allowing nine goals and saving just six shots.

Tewaaraton Award favorite Jared Bernhardt kept the Terps close late in the first half, scoring his first two goals consecutively and putting his team back within two with 6:25 remaining before the break.

Griffin Brown followed with his sixth goal of the NCAA tournament, and nearly five minutes transpired before Virginia returned to the scoreboard to make it 9-7. The clock expired, and Maryland trailed at halftime for just the second time this season.

Wisnauskas was the Terps’ go-to guy in the third quarter. The senior opened the second half with an unassisted goal, and he later found the net twice more in the frame off assists from Kyle Long and Bubba Fairman.

The last of those strikes knotted the score at 11-11 as the two sides continued to trade goals. But then, the Cavaliers made a run.

Virginia scored on three straight possessions after the tying goal as Petey LaSalla won three straight faceoffs. Shellenberger fired a shot off the leg of McNaney, and then veteran Matt Moore snuck one by McNaney to put the Cavaliers up by five with 11 minutes left on the clock.

Moore’s strike seemed to deflate the Terps’ crowd, who had seen their side held scoreless for nearly 18 minutes. But nearly five minutes after Moore’s goal, Maryland forced everyone to hold their breath.

Wisnauskas scored again and drew a penalty. With a man-up, Maltz found the net 10 seconds later. Nearly a minute later, it was Fairman. Then, Anthony DeMaio closed the gap to one with just under four minutes to play.

It was a patented Terps’ offensive explosion, coming at seemingly the right time. But Moore scuttled the spate with his fourth and final goal of the day, and Virginia’s defense locked up for the next three-plus minutes.

DeMaio wired a shot past Rode with 10.8 seconds left, giving Maryland one last shot to tie the game. Wierman won the faceoff and sprinted forward.

But Rode’s ribs were enough.