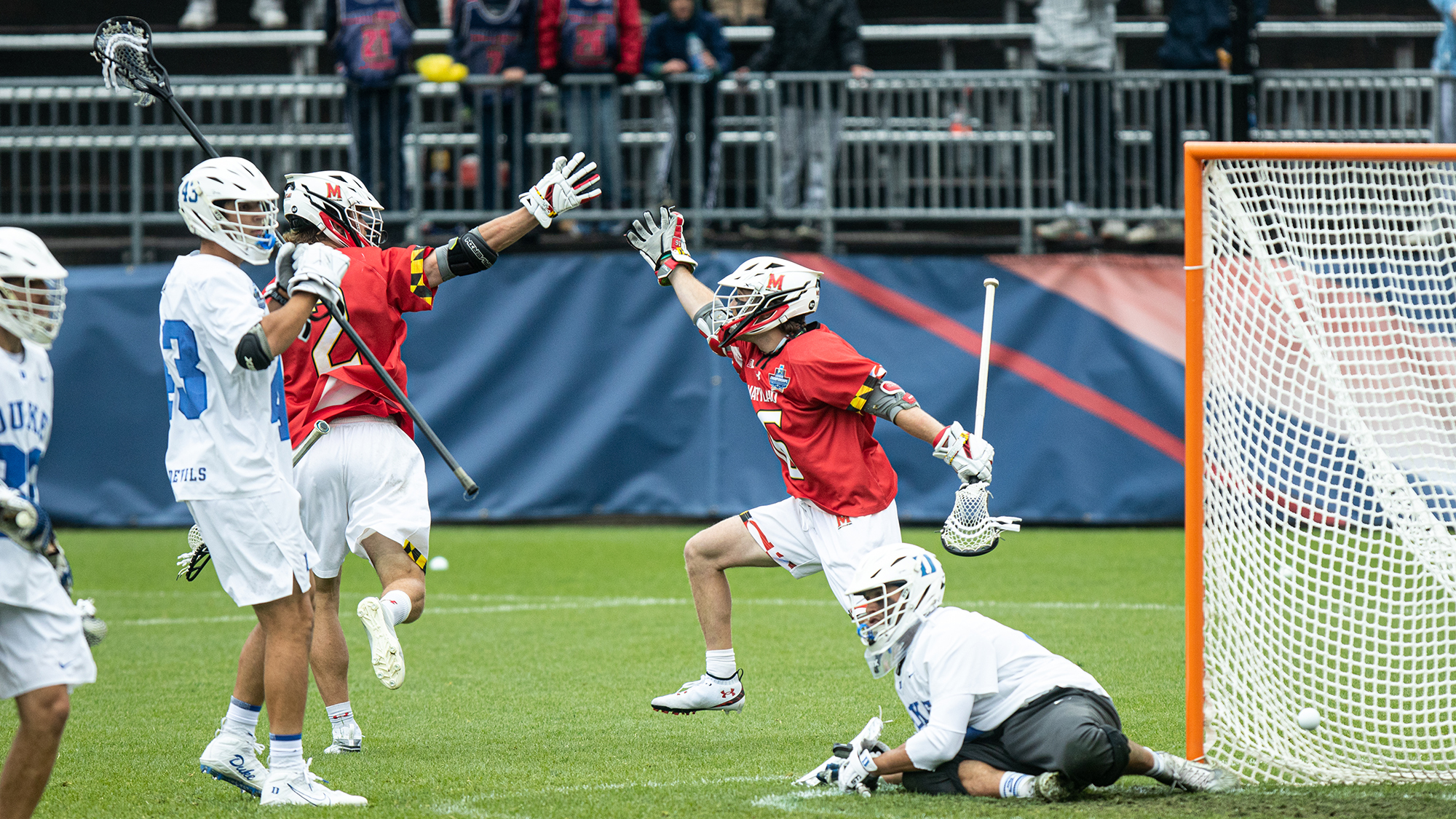 Bubba Fairman and Anthony DeMaio celebrate after a goal during Maryland men's lacrosse's 14-5 win over Duke in the NCAA semifinals on May 29, 2021. (Julia Nikhinson/ The Diamondback)

Justin Shockey won his seventh faceoff late in the second quarter, and the senior decided to do something he hasn’t done all season — take the ball himself. Shockey picked it up at midfield and immediately sprinted toward Duke goalie Mike Adler, whizzing it by him.

The faceoff specialist’s fourth goal of his career was part of a 7-0 Maryland run that put the game out of reach for the No. 2 Blue Devils in the NCAA semifinals.

Jared Bernhardt led an army of eight goal scorers for the Terps, as they dominated throughout a 14-5 win and advanced to their 15th national championship appearance against No. 4 Virginia on Monday.

Maryland and Duke were two of the fastest teams in the country this season, and when they finally met in the semifinals Saturday, their speed led to a combined 13 turnovers in the first quarter.

With no one able to take care of the ball, only three goals were scored in the opening frame. Jared Bernhardt had two for the Terps and Dyson Williams found the net once for the Blue Devils.

Bernhardt and Maryland controlled the pace for the rest of the first half. Logan Wisnauskas dished to Anthony DeMaio for the first goal of the second period and Bernhardt secured a hat trick five minutes later for the Terps’ fourth score.

Tewaaraton finalist Michael Sowers shrunk Maryland’s lead to one with an unassisted goal, but that was the last time Duke scored in the half, as the Terps rallied for four straight before the break.

The highlight of the run was Shockey’s unexpected goal, but Wisnauskas, Griffin Brown and Bubba Fairman also sent shots past Adler.

Maryland kept on scoring in the third, and everyone got involved. Defensive midfielder Roman Puglise registered just his second goal of the year, and Brett Makar tallied his first assist in the process.

Wisnauskas and Bernhardt each picked up another goal in the latter stages of the third, giving the Terps a commanding 11-3 lead.

Williams was the one to finally break a 20-minute scoring drought, putting one past Logan McNaney with eight seconds left in the third period.

With one quarter standing between Maryland and a trip to the national title game, the Terps finished one of their strongest efforts of the season in dominant fashion.

DeMaio picked up his second goal, while Eric Holden notched just his third goal this year on a set-up from Eric Malever. But it was Bernhardt who had the final word for Maryland, getting his fifth of the day and 69th goal of the season with under five minutes remaining.

Sowers managed to get himself one last collegiate goal in the final 20 seconds of the game, but the Terp defense had stifled his Blue Devils all day.

After the emphatic 14-5 win, Maryland sees itself in the championship game for the sixth time under Tillman and the chance to secure its first perfect season since 1973.