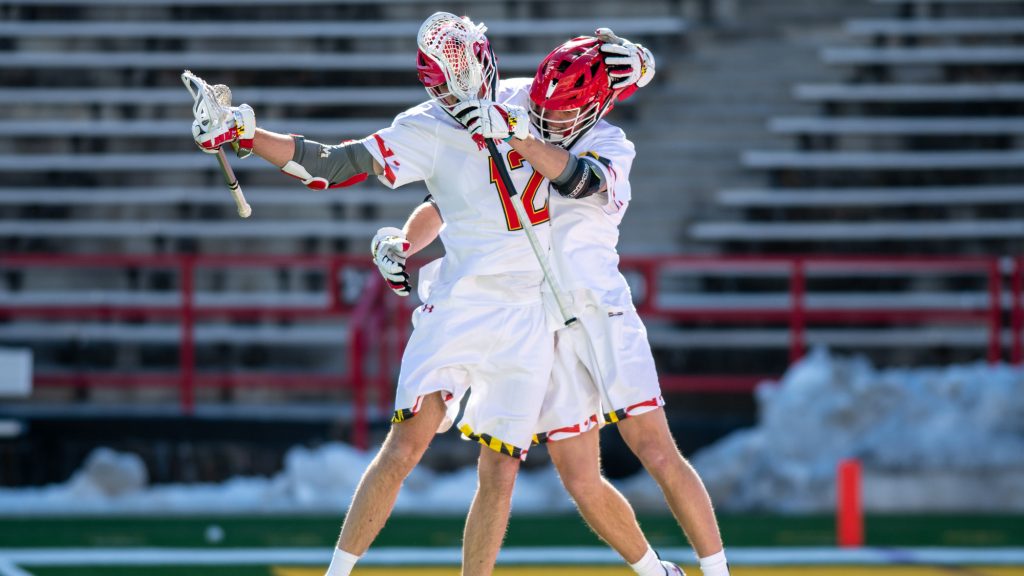 Anthony DeMaio and Logan Wisnauskas first played in a game together for Maryland over three years ago, when the Terps were defending their 2017 national championship.

Now Maryland men’s lacrosse is two wins away from another trophy, and DeMaio and Wisnauskas are still driving forces for coach John Tillman’s high-powered offense.

The pair’s years-long chemistry was on display during the Terps’ triumph over No. 6 Notre Dame in the NCAA quarterfinals Sunday. They connected three times in the final 25 minutes of the game, including Wisnauskas’s toss to DeMaio for the game-winner in overtime.

“We’ve been playing together for a while,” DeMaio said. “We know what each other likes to do, and I think that we were obviously lucky enough to find each other there when we really needed it.”

Along with Tewaaraton Award finalist Jared Bernhardt, DeMaio and Wisnauskas provided veteran leadership when Maryland needed it most — down three goals with just over 10 minutes to play and its season on the line.

DeMaio assisted Wisnauskas on the goal that made it 12-10, which kickstarted a four-goal run that helped Maryland reclaim the lead.

A short while later, the roles were reversed when Wisnauskas assisted DeMaio on his shot that sent his team to the national semifinals for the fourth time in the last five tournaments.

The game-winning play wasn’t drawn up during the break before overtime. The two seniors instead relied on what they already knew about each other’s game.

“They kind of played off some of the picks earlier in the game, so we thought that we could maybe get that,” DeMaio said. “It’s just something we’re always practicing. We just have trust in each other, and all the guys on this team.”

Not only did DeMaio and Wisnauskas trust one another to seal the win in overtime, but they had the complete trust of their coaching staff in the game’s most intense moment.

“I’m sure if it wasn’t there, Logan would’ve waited. And if Anthony didn’t have a good shot, he would’ve circled back, and then we would’ve gone into something else,” Tillman said. “There’s a lot of trust built up there.”

DeMaio noted after the game that he and Wisnauskas have somewhat of a special connection because they’re both left-handed, adding some people have referred to them as the “weird lefties” in the past.

Whether their status as “weird lefties” had anything to do with the feat at the end of Sunday’s quarterfinal or not, their chemistry has been evident for a long time.

“I certainly don’t call them that,” Tillman said. “Those guys have great chemistry. They’ve played together forever. When it comes to making decisions, I’ll take those two guys any day of the week.”

[Maryland men’s lacrosse eases past Vermont in first round of NCAA tournament, 17-11]

The undefeated Terps’ victory in South Bend marked just the third time they’ve won a game by less than four goals this season. The two previous times were against Johns Hopkins, and Wisnauskas and DeMaio were the ones to net the final goal in each of those matchups.

The sun will set on the 2021 season this weekend in East Hartford, Connecticut, with both semifinal games being played there Saturday and the championship game on Monday.

The future is uncertain for seniors such as DeMaio, Wisnauskas and Bernhardt, but they’re grateful for the opportunity that awaits them in the final two rounds.

“We love our players so much, and we know the sacrifices they made,” Tillman said. “To see them happy and joyous and know that they have another week together, it’s worth its weight in gold. We’re just so thankful for it.”