Maryland men’s lacrosse eases past Vermont in first round of NCAA tournament, 17-11 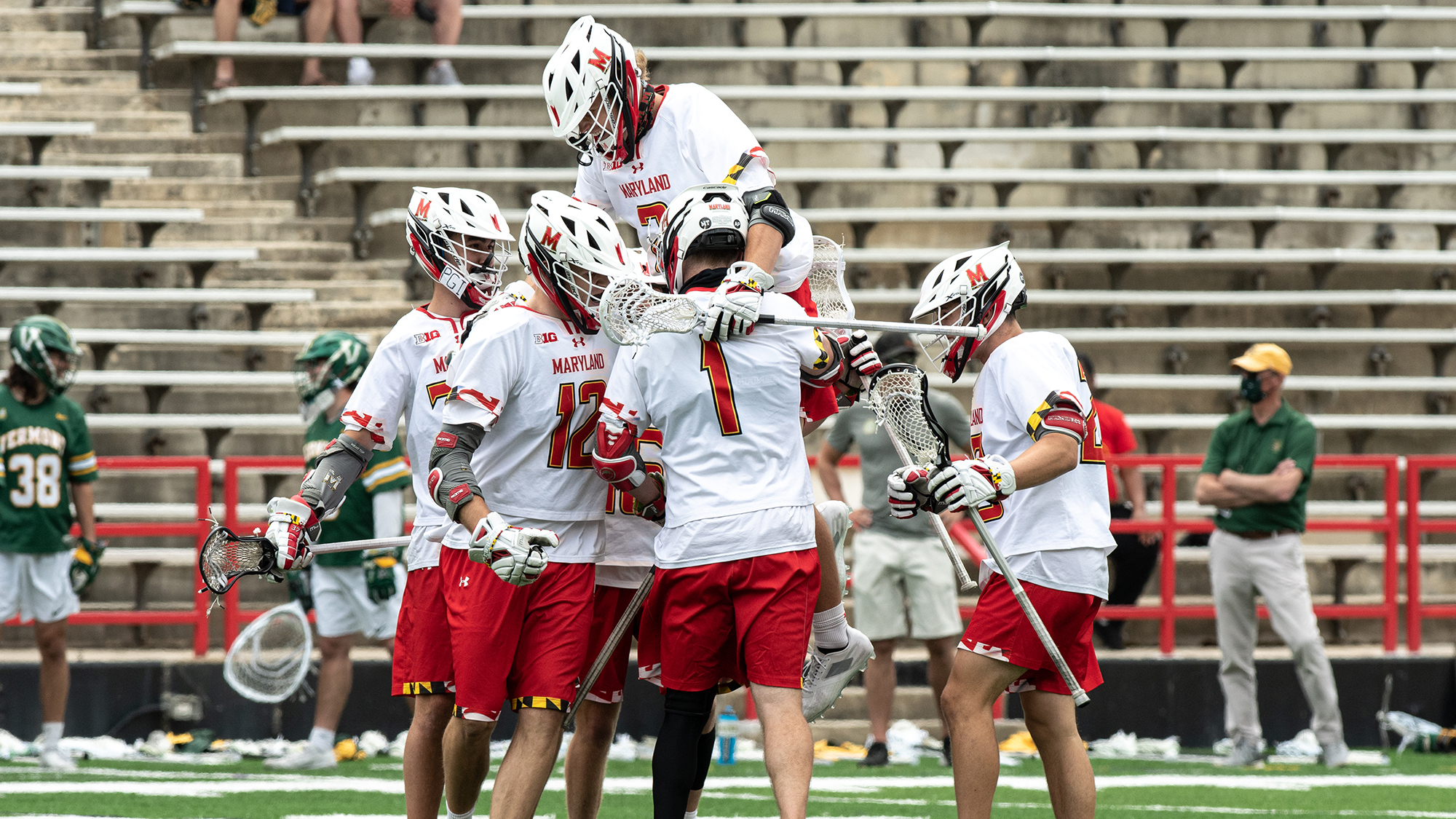 Bubba Fairman celebrates with his teammates during Maryland men's lacrosse's 17-11 win over Vermont on May 16, 2021 (Julia Nikhinson/ The Diamondback)

Logan Wisnauskas took three steps back and found Kyle Long cutting across the middle of the field. Long received the ball four yards from the cage and quietly tossed it behind his back straight into the net.

Long’s goal was Maryland men’s lacrosse’s 14th of the game, as the offense was efficient all afternoon. The Terps added three more goals in the fourth quarter to cruise to an opening round win over Vermont, 17-11.

“To get a win in the NCAA playoffs, it’s never easy,” coach John Tillman said. “These guys, they’ve put so much into this, so it’s just great to have another week.”

Less than three minutes in, Bernhardt turned to his left and registered Maryland’s first goal of the tournament. The score gave the Terps a 1-0 lead in a game they would never trail in.

After the Catamounts tied the game, Maryland’s third leading scorer, Wisnauskas, fired one past Vermont goalie Ryan Cornell to put the Terps back up by one.

Bernhardt scored twice more in the opening frame, Joshua Coffman added one and Maryland held a 5-2 lead at the end of the first.

“I think Jared does a good job of kind of orchestrating that from behind or wherever he’s playing,” Long said.

Long and Daniel Maltz found the back of the net early in the second quarter, and the Terps went up by five. Their offense continued to fire on all cylinders as Bernhardt notched his fourth goal of the half on a set-up from Long.

Vermont scored the next two goals, one coming from Jonas Hunter in the final few minutes of the first half and the other JJ Levandowski, who finished with a hat trick against Maryland.

The second goal pulled the Catamounts within three of the Terps, but they would get no closer.

Bernhardt, Wisnauskas and Bubba Fairman pitched in to pull Maryland ahead in the third quarter, while the defense held Vermont scoreless for 14 minutes across the third and fourth periods.

“We’re just trying to dictate tempo, play our game, play Maryland lacrosse,” defenseman John Geppert said. “It’s kind of something we’ve been focusing on all year but today we put it together a little bit more.”

The Terps and Catamounts would trade goals in the final quarter, each notching six, in what was a fairly low-scoring game before the final 15. Long completed his hat trick and Luke Wierman notched his first goal of the season in the final few minutes of the contest.

Maryland was bolstered by a strong performance at the faceoff X by Justin Shockey throughout the game. Shockey, who’s had an inconsistent year in 2021, won 19 of the 28 faceoffs he took Sunday, giving the Terps an unexpected boost.

“Justin did a great job of kind of working his way through it and just getting better as the game went on,” Tillman said. “It’s been an up and down year, and he was an absolute pro this week.”

After the strong opening round showing, Tillman’s squad will square off with sixth-seeded Notre Dame in the NCAA Quarterfinals. It’ll be Maryland’s seventh straight trip to the quarterfinals, dating back to 2014.