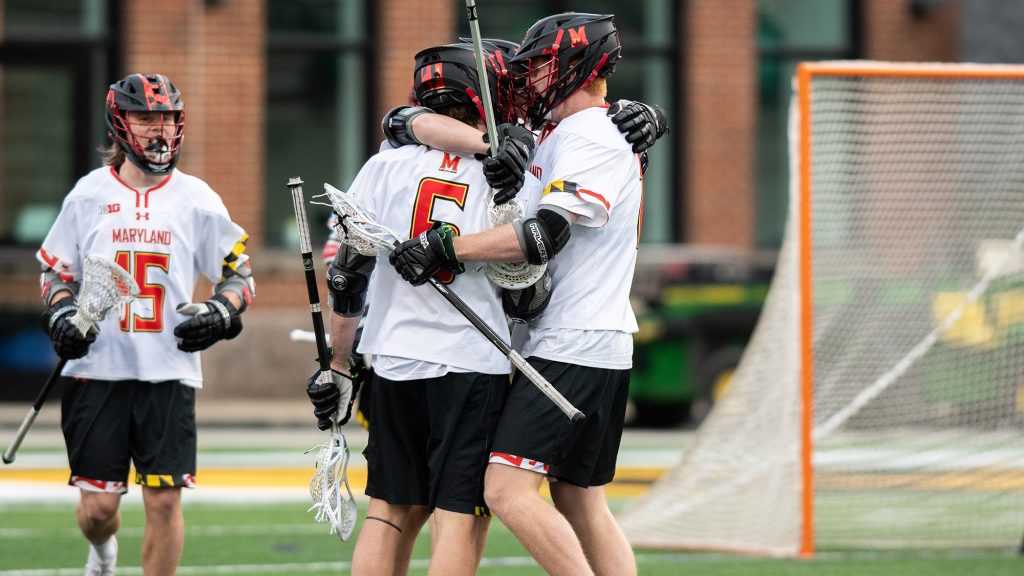 For the second time in three weeks, Maryland men’s lacrosse fell behind Johns Hopkins in the second half.

On April 24, it was the Terp’s veteran stars that took over late in the game. Two goals from Logan Wisnauskas and one from Jared Bernhardt helped Maryland regain the lead and triumph over the Blue Jays in the regular season finale.

Then on Saturday in the Big Ten title game, coach John Tillman’s squad went down 9-6 early in the second half.

But instead of Bernhardt and Wisnauskas carrying the scoring load as the Terps mounted a comeback, five different players netted a goal in the final 30 minutes to push them over Johns Hopkins for the third time this year.

“Our best offense is when we get everybody involved — we’re sharing the ball,” Tillman said. “That’s when I think we put more pressure on other teams, when we don’t get stagnant. You have to play that way against Hopkins.”

In a tough spot with a lot on the line, Maryland used its offensive depth to take home the Big Ten championship.

Now the conference tournament has concluded, the Terps have likely played their final game against a Big Ten

team this year. Although their last 12 games were against the same five teams, they were

able to learn a lot about their offense over the course of the season.

That includes how to adjust to different game situations. Down 8-6 at halftime, offensive coordinator Bobby Benson and his players focused on how they could better attack a pesky Hopkins defense.

They decided that one strategy would make the difference — spacing the field. And with everyone spread about the turf, there was no telling who might take the next shot.

“We went out and we tried to space the field a little bit better,” DeMaio said. “That was definitely a problem in the first half, just getting too jammed up. So just spacing the field, coach Benson did a great job making sure we were doing that.”

Maryland got contributions from up and down the roster Saturday. Before the second half run commenced, graduate transfer Eric Holden notched just his second goal of the year with 1:15 remaining in the second quarter.

Holden came to Maryland after four successful seasons at Hobart, but he missed five games this year due to injury. However, in the 12th game of the 2021 campaign, Holden was an unexpected scorer.

“I thought Eric Holden’s goal was huge tonight,” Tillman said. “He’s been playing great. He’s a guy that’s finally come back… I’m so proud of him.”

Tillman said after the game that Bernhardt is the one exception to their effort to diversify the team’s scoring — whenever he has the ball, he’s expected to put it in the cage.

It’s pretty difficult to prepare for the Terps when they have the nation’s leading scorer in Bernhardt, and a player like Holden who can come out of nowhere and register a goal as well.

That’s why Maryland thinks its depth can help them deceive opponents when they open up the NCAA tournament next weekend.

“We feel like when we really share it and move it… it should be somebody different,” Tillman said. “And if that’s the case, that’s really helpful because if they’re gonna key on one guy, hopefully it opens up something for somebody else.”