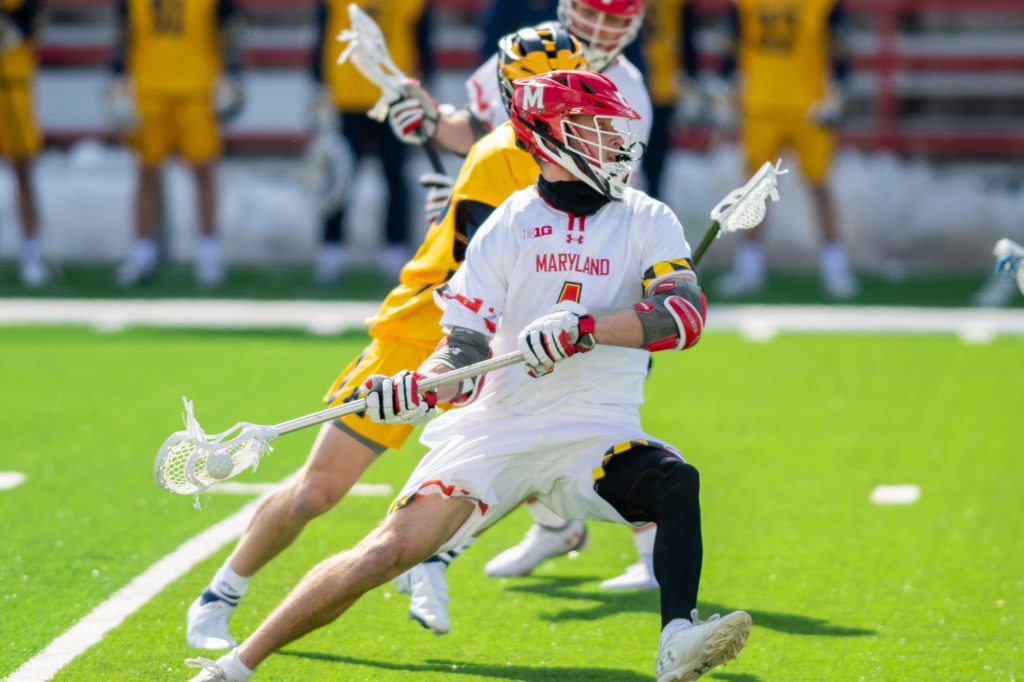 Jared Bernhardt winds up for a shot during Maryland men's lacrosse's 20-9 win over Michigan on Feb. 20, 2021. (Joe Ryan/The Diamondback)

Jared Bernhardt extended his stick to reach an errant pass from Daniel Malz. Bernhardt wasted no time reeling it in and placing it cleanly in the net for his sixth goal of the Big Ten semifinal against Michigan Thursday.

The Tewaaraton Award frontrunner went on to set a new career high later in the game, finishing with eight goals and 10 points for the afternoon.

Led by Bernhardt, Maryland men’s lacrosse looked sharp in its first game in 12 days. The Terps advanced to Saturday’s Big Ten championship game with a 16-8 win over the Wolverines.

“I felt like [Bernhardt] picked his spots really, really well, and he finished his shots,” coach John Tillman said. “I felt like in those big moments, Jared just seemed to step up tonight.”

The first four minutes may have looked like deja vu. When these two teams last met April 10, Michigan jumped out to a 5-0 lead before Maryland buried it with a 16-goal run. On Thursday, the Wolverines notched the first two goals of the game, putting the Terps in an early hole.

But Michigan stopped there, and Maryland’s subsequent run was only six goals in a row.

Bernhardt did most of the damage for the Terps in the first half, scoring four times and assisting on another strike.

Bernhardt’s assist gave him his 258th point of his career, passing Matt Rambo for most points in Maryland history. He previously passed Rambo for most all-time goals on April 3 against Penn State.

“I just credit my teammates. They’re all my really good friends, and we’ve been able to play with each other for a little bit now,” Bernhardt said. “They’re able to find me.”

Three other Terps found the back of the net in the first half, too. Bubba Fairman recorded his 13th and 14th goals, and graduate transfer Griffin Brown fired a missile past Wolverines goalie John Kiracofe.

With time ticking down in the second period, defenseman Nick Grill cleared it to Joshua Coffman, who registered his third goal of the year with just three seconds left on the clock. Maryland took an 8-4 lead into halftime.

“Josh is a guy that’s very dangerous in transition,” Tillman said. “That’s a weapon that we feel like a lot of teams don’t have: guys like that who can go from defense to offense.”

After sophomore faceoff specialist Luke Wierman lost four out of his first five faceoffs, Tillman went back to this year’s original starter at the X, senior Justin Shockey.

And Shockey provided a spark off the bench, winning 14 out of 22 faceoffs the rest of the way. Maryland took advantage of the possession time, outscoring the Wolverines 13-6 once he entered the game.

Michigan opened the scoring in the second half as well, but the Terps were not flustered.

Freshman Eric Malever responded with his fifth goal of the year. And after the Wolverines got the best of goalie Logan McNaney once more, Maryland went on another run of five straight goals, putting it up 14-6.

Tillman’s squad could coast for the rest of the contest. Fittingly, Bernhardt netted the final goal of the game with 3:04 remaining.

The Terps will face either Rutgers or Johns Hopkins Saturday evening at Panzer Stadium in University Park, Pennsylvania.

“I’m very proud of our guys… to get back up here, to get a victory and reach the championship of our conference tournament,” Tillman said. “We’re looking forward to playing a really good team, regardless of who it might be.”