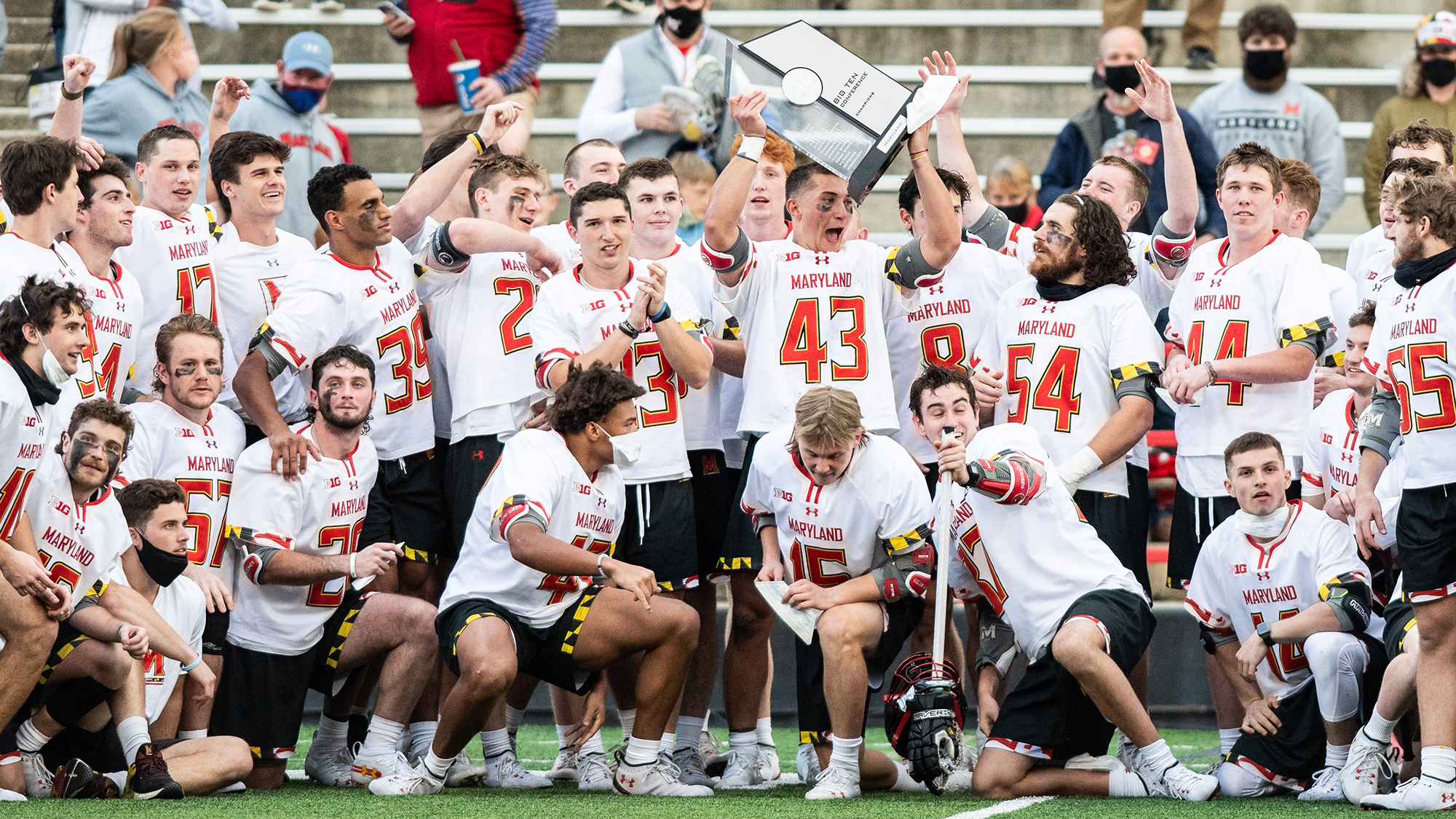 Daniel Maltz caught the pass right in front of the net while in mid-air. Before he landed, he snapped a shot past the goaltender. As he landed and saw the play, he emphatically fist-pumped, knowing the magnitude of the goal he just scored.

Maltz’s third goal of the match was a pivotal one, a championship-deciding tally that would give Maryland men’s lacrosse a 12-10 win over Johns Hopkins. It secured the program’s third Big Ten title.

“It wasn’t always pretty,” head coach John Tillman said. “But we found our way towards the end of the game.”

The Terps trailed for most of the match, but after giving up a goal in the first minute of the third quarter to go down 9-6, they stood tall. For the rest of the game, they only allowed a single goal, a strike from Matt Narewski seconds after Maltz’s tally to cut Maryland’s lead to just one.

Bernhardt scored his second on a beautiful play, cutting to the inside and then spinning back to the outside before firing a goal to cut the Terps’ deficit to 9-7. The goal was his 53rd this season, a new school record for scores in a single year.

Next, it was Bubba Fairman, who potted a goal home while falling to the turf to make it a one-goal game.

And then came the fourth quarter. With less than 15 minutes between a loss that would end their hopes of an undefeated season, Maryland continued to press forward. Maltz scored his second off an assist from Bernhardt to tie the game.

About 6 minutes later, with just 5 minutes left in the match, Kyle Long moved in from the right side, surveying the defense. Sensing an opportunity, he pressed forward, leaping off his feet and generating power for a snipe that found the back of the net and gave Maryland its first lead since the first quarter.

“You just gotta keep plugging along and not focus on the scoreboard,” Tillman said.

Bernhardt kicked off the match with his first goal and sparked a scoring spree from both teams, scoring 1:24 into the game. From there however, the Blue Jays would respond, scoring three straight goals to take an early lead.

Unbothered, the Terps came back to take the lead with a three goal spurt of their own, starting with Anthony DeMaio, who fired a wicked underhand shot that beat Johns Hopkins goalie Tim Marcille. Maryland would take a 4-3 lead on Maltz’s first, a play where he caught a cross-field pass from DeMaio and fired it past an unready Marcille.

“I think [the high scoring] just speaks to both teams and just the edge and competitiveness that was out there,” DeMaio said.

From there, the Blue Jays scored three unanswered and kept a steady two- or three-goal distance from the Terps until the third quarter. Joey Epstein was a thorn in Maryland’s side, finishing with seven shots and three goals, including one where he came from behind the net with a diving shot for a score.

“Early on we just didn’t do a good job of taking away the inside,” Tillman said. “And they got a lot of goals.”

But the Terps would prevail. They kept Johns Hopkins off the board for nearly 28 minutes, earning a victory and a chance to celebrate.

“Guys just kind of stuck together,” Tillman said. “And after kind of falling behind, I really was impressed with the way we battled and just kind of dug in defensively.”

White jerseys raced off the bench as the final buzzer sounded, jumping up and down in absolute glee, painted against a green field in State College, Pennsylvania.

Then, it was covered up, not by any kind of gloom, but rather by black championship t-shirts that commemorated and secured Maryland’s place in conference history.

“We knew we were going to be in for a dogfight,” DeMaio said. “And we … prevailed.”