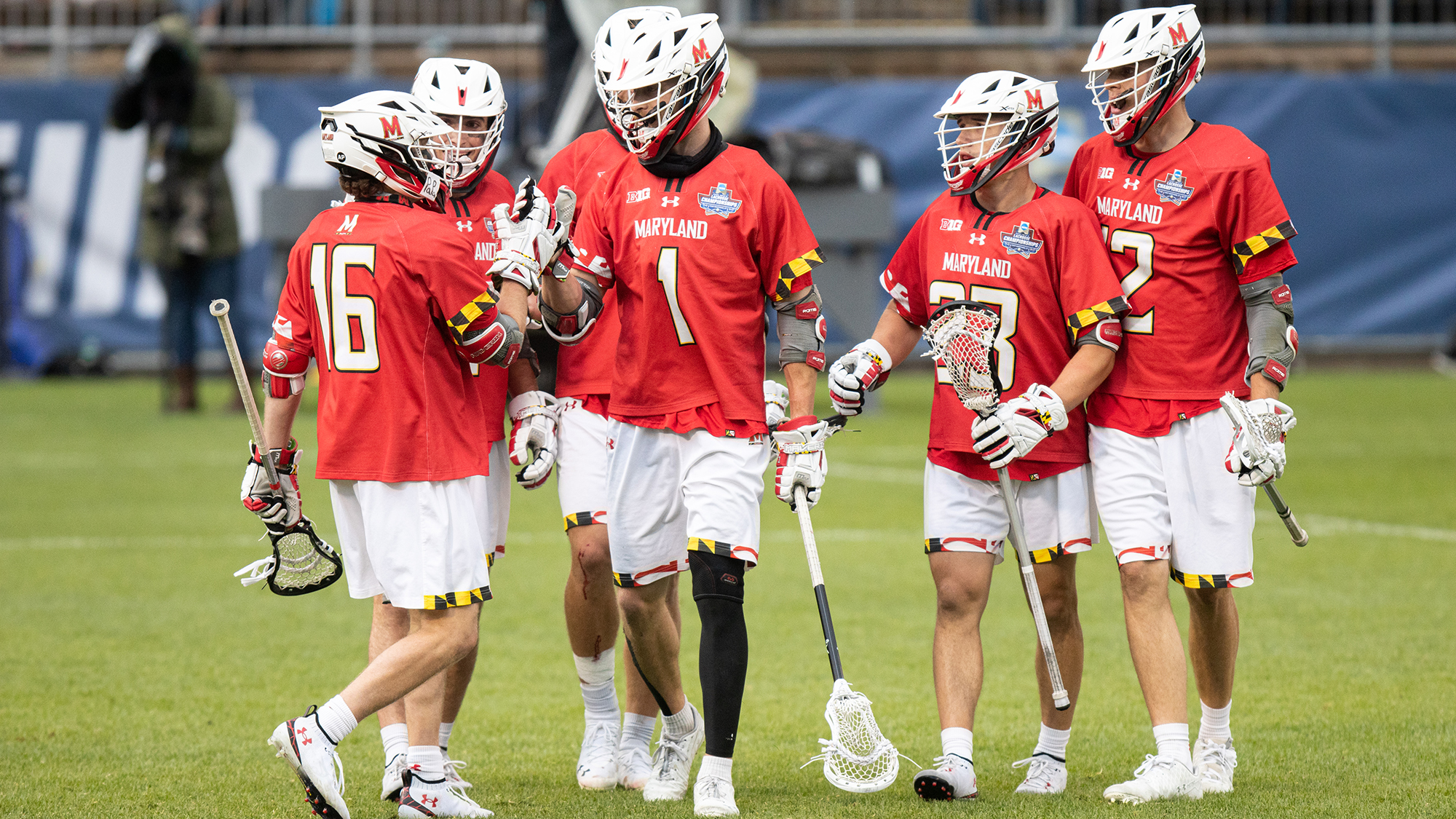 Jared Bernhardt celebrates one of his five goals with his teammates during Maryland men’s lacrosse’s 14-5 win over Duke in the national semifinal on May 29, 2021. (Julia Nikhinson/The Diamondback)

Playing in its sixth national championship game appearance in the last 10 NCAA tournaments, Maryland men’s lacrosse will face former conference rival Virginia, and it’ll be a rematch of the 2011 championship game, in which the Cavaliers were victorious.

But that’s not the loss Maryland will be looking to avenge on Monday afternoon.

The final game of the 2021 season immediately brings back memories of a not-too-distant quarterfinal game from 2019 — when Virginia bounced the Terps.

The Cavaliers overcame a five-goal deficit to take down coach John Tillman’s Terps in overtime, searing a painful memory into the mind of the coach and his returning players.

“Our kids did everything they needed to do,” Tillman said after the game. “I need to do a better job in that moment, and managing some of the things of the game.”

To make matters worse, Virginia sent the game to overtime on a controversial goal some considered an incorrect call. The shot from Virginia’s Michael Kraus pinged off the crossbar but was ruled good.

Since the agonizing defeat in 2019, Maryland hasn’t lost in the postseason, and the team has only lost once overall — a regular season bout at Villanova last year.

On Monday afternoon, the Terps will have a chance to make up for their 2019 loss and complete the first undefeated season in Division I men’s lacrosse since 2006.

“Obviously we were very excited about the game because we have so much respect for Virginia and their program, and they’re a talented team and defending national champions for a reason,” Tillman said.

Maryland and Virginia were set to have a rematch on March 14, 2020. That, of course, never happened.

Cavaliers coach Lars Tiffany recalled throwing out the Maryland scouting report on Thursday of that week, realizing the game likely wouldn’t take place. He’s likely picked it back up since the two teams advanced to the final Saturday.

For Maryland players eagerly awaiting the rematch last season, that Thursday created another bad memory associated with Virginia — the demise of their 2020 season.

“That was the end of our season,” Jared Bernhardt said. “I remember it pretty clearly … I definitely remember that day.”

Although both teams badly want to take home the title from East Hartford, Connecticut, on Monday, a lot of respect exists between the two programs.

“Lars is a guy I respect a ton,” Tillman said. “That program, obviously, they’re reigning national champions, they’re a who’s who in terms of recruits, and they’re very talented and always have been.”

He knows they’ll present a major threat in the title game, offering him another reason to respect Tillman’s work at developing and maximizing talent.

“I’m always amazed at the poise of his offensive players,” Tiffany said. “They just don’t beat themselves with bad decisions or bad turnovers, and that’s why he’s been here.”

Monday marks Maryland’s 15th national championship appearance and sixth since Tillman took over the program in 2011. The Terps haven’t played on Memorial Day since 2017, when they defeated Big Ten foe Ohio State to break a 42-year championship drought.

But if it finishes off the undefeated season against the Cavaliers, this 2021 squad could go down as the best team during Tillman’s tenure and one of the best of all time.

According to Tillman, the team doesn’t often discuss its record, even with just one team standing between it and perfection.

“We have not brought it up one time,” Tillman said. “I sometimes forget that we’re undefeated.”