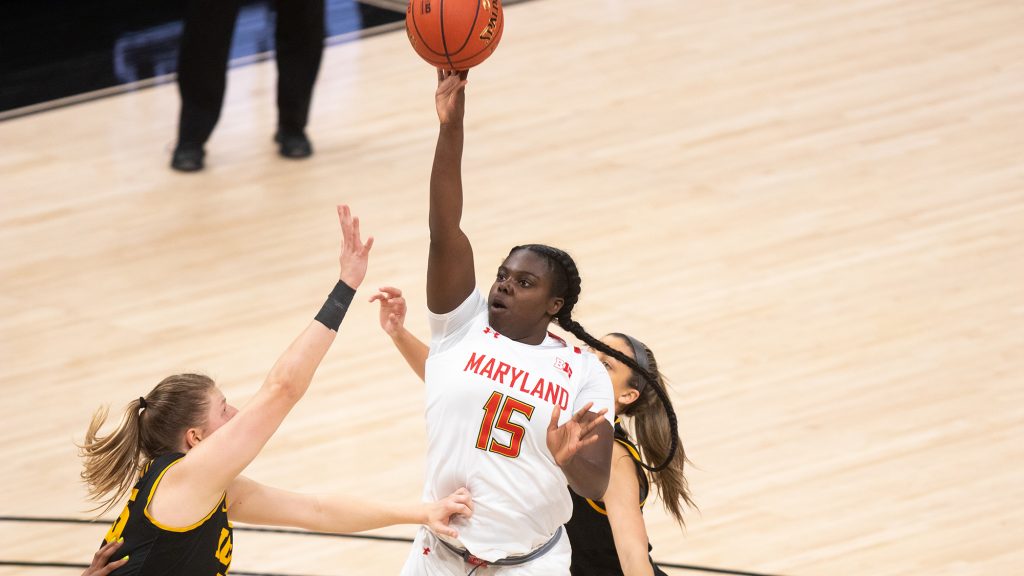 INDIANAPOLIS — As the final buzzer sounded, two group hugs emerged. The first was a group clad in white — the Maryland women’s basketball players — who raced from the bench and onto the floor to embrace near the halfcourt logo.

The second was the group clad in black — the coaches and staff — who shared a moment with each other. After a second, one of those coaches peeled off and looked into the stands. Brenda Frese pointed to the small crowd in attendance, but was focused on a small group sitting right behind the Terps’ bench, one that consisted of her sister, mother and father.

No. 7 Maryland secured its fifth Big Ten Tournament championship with a 104-84 win over Iowa. The 104 points is the highest in a basketball title game in the conference’s history.

As Frese stood on the stage and spoke to the crowd, she thanked her husband, the fans and then began to tear up as she began to talk about her parents.

“Go Terps,” she choked out before rejoining her team, which mobbed her and brought her back into the hug.

The tears continued when Diamond Miller was named the tournament’s Most Outstanding Player. As she gave her speech, Miller choked up, overcome by the emotion of the moment.

And as the Terps cut down the net, Frese made the final cut, twirling the twine around her head as she stood atop the ladder. After she descended, she moved where her parents were sitting and shared a long embrace with her father before draping the net over his neck.

“Obviously to have both my parents here … this one is really incredible, really special,” Frese said.

The win is Maryland’s second straight in the title game, though this victory was in front of a far sparser crowd and with a vastly different roster. But like it had all year, it responded to its opponent’s runs.

The Terps opened the third quarter with an 18-point lead, but the Hawkeyes briefly pushed back into the match with a 6-0 run. Caitlin Clark engineered the run, including on a second-chance bucket after she grabbed her own missed three.

But from there, Maryland re-established its dominance.

Midway through the period, Miller drove to the hoop on a fastbreak. With resistance between her and the hoop, she lowered her shoulder and knocked the defender back before tossing a layup that dropped in.

Moments later, Miller found herself with the ball again, and pirouetted en route to the hoop for a layup to grow the lead to 19. She finished with 15 points, four rebounds, and seven assists.

Mimi Collins was part of that third quarter spurt as well, as she knocked down a triple off a crosscourt feed from Miller. She flashed her offensive skill set, making 3-of-6 threes and scoring 17 points for the game.

Her frontcourt partner, Chloe Bibby, started the game on a tear, making four of her first six field goal attempts and scoring 11 opening quarter points. She found herself open in transition repeatedly, making the Iowa defense pay for leaving her any room as she rained down three threes in the quarter. She finished the afternoon with a team-high 21 points.

That pair was part of a balanced and effective offensive approach from the Terps, who re-established their shooting prowess with a 5-of-9 first quarter from behind the arc. Maryland finished shooting 51.2 percent from the floor and 44 percent from deep.

“This team lets their actions speak for itself,” Frese said. “This team is probably even more potent [than the 2006 national championship team].”

Five Terps scored in double figures, emblematic of their season-long commitment to unselfish play and offensive balance. Frese’s squad assisted on 29 of their 41 field goals, the most ever in a Big Ten Tournament title game.

“When we drive to the basket, we’re gonna draw a lot of attention … we trust our teammates, throughout the year, they’ve proven they’re scorers just like us,” Miller said. “When we pass it, we think it’s going in every time.”

And that’s how Maryland found itself with the championship trophy in its hands once again. A year ago, its tournament hopes were dashed before it even started.

But in 2021, with a bubble in San Antonio approaching, the Terps hope the nets severed in Indianapolis are only the first of more to come.

“I’ve been dreaming about this since I was young. I watched it on TV and now I’m finally one of the girls playing in it,” Miller said. “It’s actually really crazy to believe.”