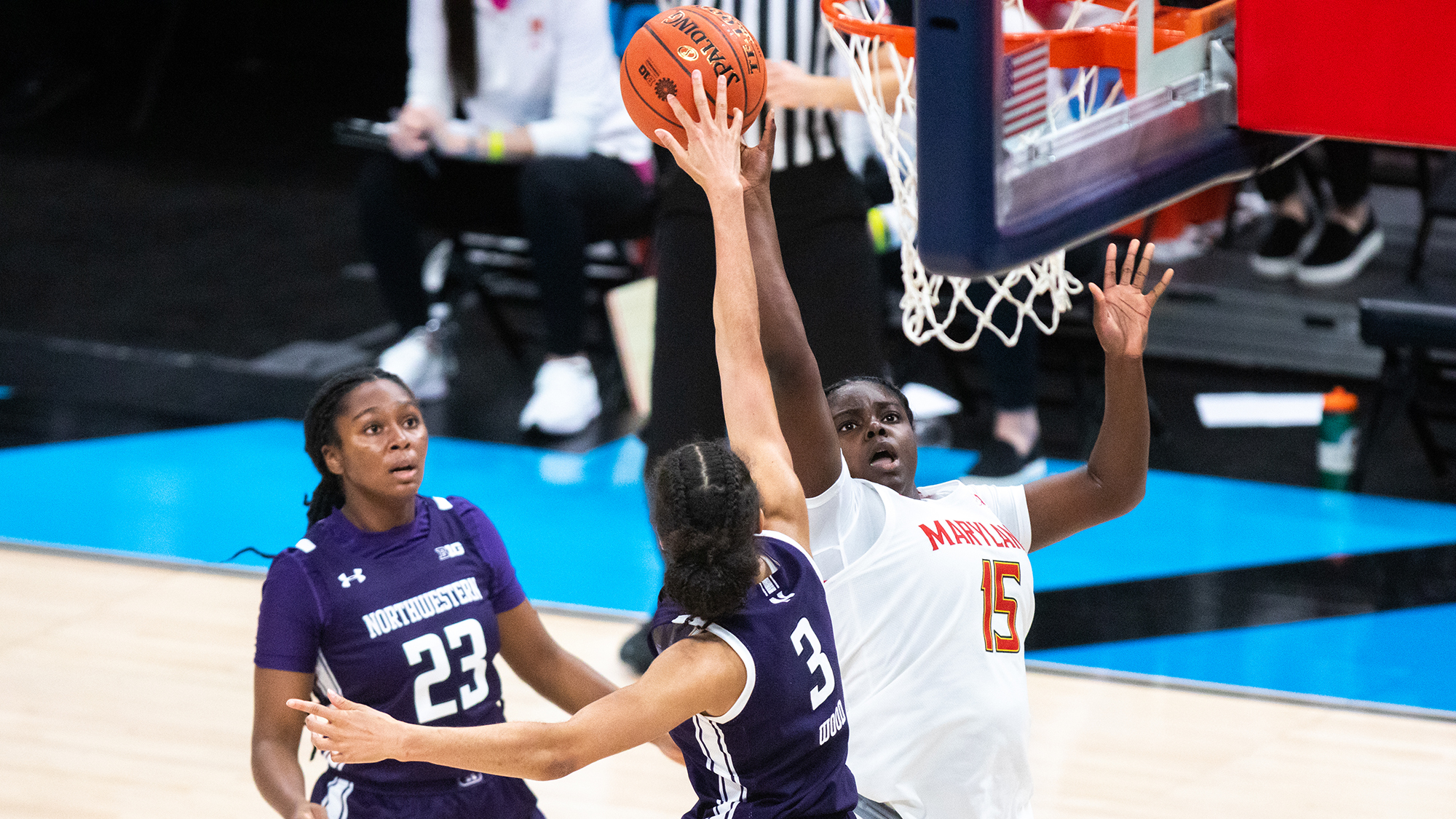 INDIANAPOLIS — The second Diamond Miller passed the ball, she darted to the rim, catching the Northwestern defender off-guard for an instant.

But that momentary lapse was all Miller needed, sprinting into open space and running the give-and-go with ruthless efficiency before finishing a layup.

The play capped off a 18-0 run for Maryland women’s basketball, which used that late second quarter stretch to build up a 25 point advantage at the half. And that lead was enough for the Terps to blow out Northwestern 85-52 to advance to the Big Ten tournament championship game for the seventh straight season.

“You saw a team that punched first and never looked back,” head coach Brenda Frese said.

Maryland’s defense was filled with energy and effort, diving on loose balls to raucous cheers from the bench in the sparsely filled arena. The Terps kept the Wildcats scoreless for over five minutes and held them to their lowest scoring half all season.

The second half brought no respite on the offensive end for the Wildcats, who shot just 29.7 percent from the field for the game and had 15 giveaways. Their leading scorer, Maryland native Lindsey Pulliam, scored just 1 point and failed to notch a single field goal, going 0-of-12 from the field.

“We have pretty good players on our team,” Alaysia Styles said. “And when our arms are out and our hands are high, it’ll be hard for anyone to score against us.”

Styles finished with a team high three steals and scored her Maryland career high with 15 points.

Offensively, the Terps had to make do without their superstar point guard. Ashley Owusu played just seven first half minutes due to a pair of early fouls and didn’t play at all during the dominant first half stretch, but the Maryland juggernaut was relentless as it marched forward.

“We’re able to go to our bench and I thought we got stronger and better,” Frese said. “We’ve got to be able to have that depth.”

With 4 minutes remaining in the second quarter, Faith Masonius held the ball near the three-point line, surveying the Wildcat defense. She had two assists already on a pair of slick assists to Chloe Bibby. But this time she went to a different frontcourt player.

Masonius lobbed the pass into Angel Reese, who rose up and finished a layup with a defender grabbing her arm and desperately trying to pull her down. As the ball fell through the basket, Reese turned to the Maryland bench her fists clenched, bellowing to her enthralled teammates.

“Everything just came into my hands today,” Reese said. “Rebounding today was what helped the team get a win.” She finished with 10 points and 11 rebounds, her first career double-double.

A possession later, Miller knocked down a stepback three to extend the Terps advantage. The sophomore led all scorers with 11 first-half points and finished with 13 along with 6 assists and 3 rebounds.

[Brenda Frese has learned about adversity, resilience on and off the court]

Miller’s first points came on the Terps’ third possession, when she grabbed an offensive rebound off a Bibby miss and finished a layup. On the way back up her floor, she clapped her hands, with her team having scored on its first three possessions. It was a harbinger of the ensuing offensive onslaught.

For the game, the Terps shot 58.6 percent from the field. They assisted on 24 of their 34 baskets, finding cutters on the baseline. They didn’t allow Northwestern to slow the game down, playing the game at their own pace as they ran in transition with great success, scoring 21 fastbreak points.

“I thought we started the game really patient, we worked the shot clock to get that lead initially,” Frese said. “It was one of our best offensive execution games as a team.”

In a season filled with dominance, this was possibly the most impressive performance yet, as the Terps took what should have been a tightly contested semifinal against a physical defensive team just a day after an emotional win over Nebraska — and instead turned the match into a rout before halftime.

“It starts with our focus first and foremost. You see when we’re really locked in on both ends of the floor,” Frese said. “…These girls are focused on winning and they’re winning the right way.”