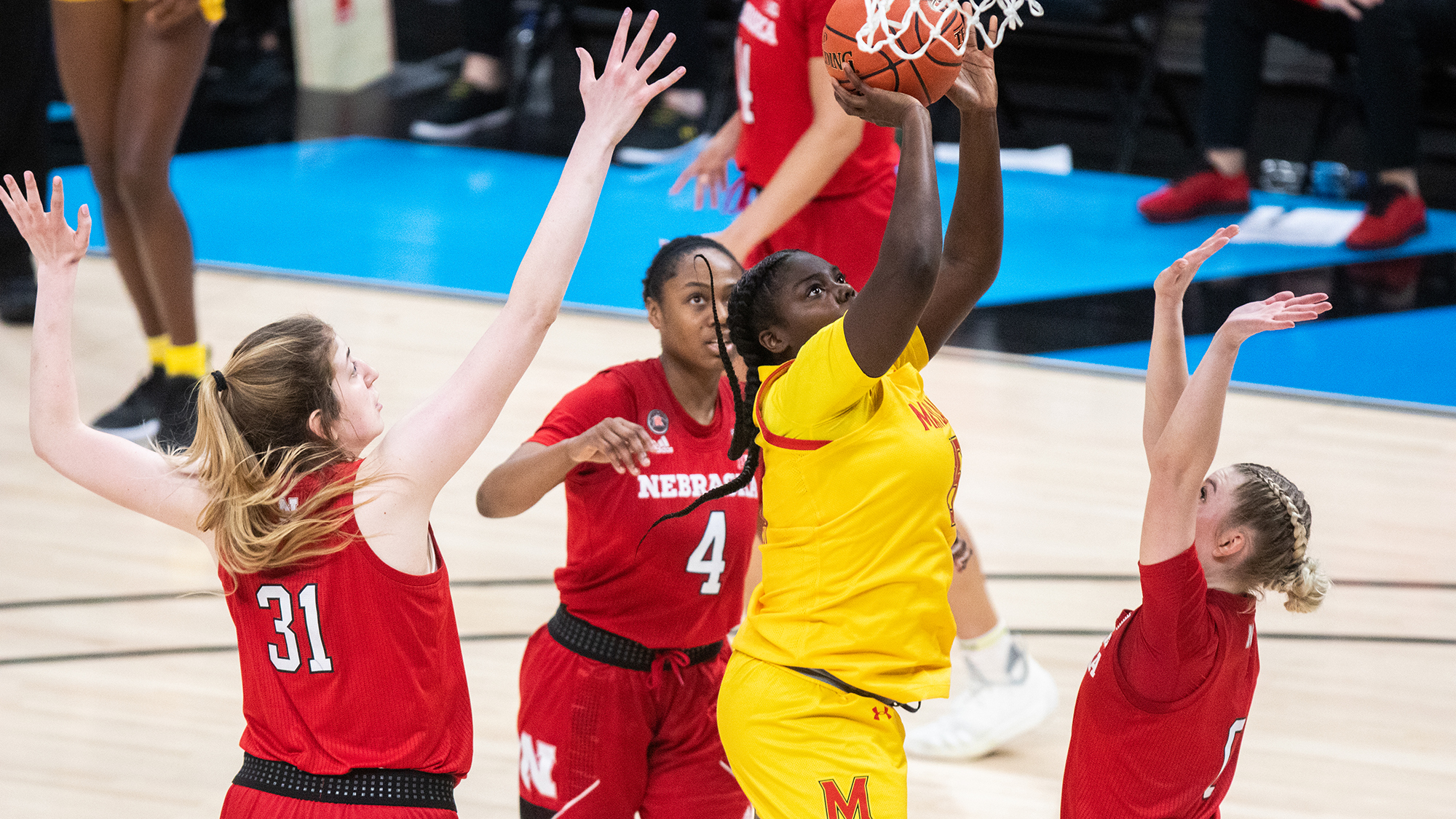 INDIANAPOLIS – Ashley Owusu grabbed the rebound and sprinted down the court. With two defenders around her, she flung up a one hand scoop layup while crashing into a Nebraska player. As the two tumbled to the ground and the ball dropped into the hoop, the referee emphatically made the charge symbol to great protest from the Terps bench.

However, after a brief conference between the officials, the call was overturned, awarding Owusu the two points and a free throw she made.

It was a game-defining play for Owusu, one that reminded Nebraska, the Big Ten, and the entire NCAA why she was last year’s Big Ten tournament MVP. Down the stretch, with the Terps needing their star point guard to step up, Owusu did just that.

Owusu dominated the game and carried Maryland, scoring 13 of her team high 22 points and made all seven of her free throws in the fourth quarter to help the Terps narrowly defeat Nebraska 83-73, advancing to the Big Ten Tournament semifinals in a game that was much tighter than most envisioned.

“I like this tournament,” Owusu said. “Who doesn’t like to be under the spotlight, come out and have fun with their team?”

Early in the fourth quarter, Sam Haiby hit a three that gave the Cornhusker a 60-57 lead. Chloe Bibby, responded, hitting a three of her own that Frese said gave the team a great deal of confidence.

[Brenda Frese has learned about adversity, resilience on and off the court]

“I think it was really good that we came out in the way we did in the fourth,” Chloe Bibby said. “We weren’t going home today, that was not even an option for us.”

From that point onward, the teams would trade baskets with Maryland trailing until Ashley Owusu hit a mid-range jumper to give her team the lead with just under five minutes left. From there the Terps would close it out with a stifling defensive performance, limiting Nebraska to no field goals and just seven total points in the last 6:46 of the game.

“Coach challenged me during halftime and in the huddles throughout the game to pick up my defensive energy, but that led to my offense,” Owusu said.

This was an uncharacteristically close matchup for the Terps, who went into the fourth quarter up just three points due to both a cold shooting night for the usual offensive suspects for the Terps and a scorching performance from the Cornhuskers.

Maryland, who led the entire NCAA in regular season scoring per game, saw their stars struggle to start their postseason. Owusu and guard Diamond Miller combined for just nine points on 3-of-12 shooting in the first half.

In the second half however, the pair showed exactly why they were both named to the All-Big Ten first team early in the third quarter. After pump-faking a three, Miller drove into the hoop and split a pair of defenders to score. She finished with 18 points on 6-of-11 shooting.

Shortly after Miller’s play, Owusu made a move of her own. She led the fastbreak, surveying the Cornhusker defense and after noticing an opening, drove hard to the hoop to finish. 19 of her 22 points came in the second half.

But early in the game, it was the frontcourt tandem that kept head coach Brenda Frese’s squad afloat.

In the second quarter, forward Chloe Bibby turned in the post, making sure that with every rotation she kept her pivot foot planted to the court. She made a move to the rim, but in the corner of her eye spotted Mimi Collins in the corner.

In mid-air, Bibby adjusted and tossed a pass to Collins, who had moved into an open spot on the court and drained a three.

Bibby and Collins weren’t expected to be the focal points of the Terps offense, but they combined for 35 points on 14-of-22 shooting. They were particularly efficient in the first half, making 11 of their 12 field goal attempts and pacing the Terps to a slim four point lead at the break.

“I think everyone can score. We can all get a bucket at any time,” Bibby said. “Mimi and I were able to get our shots.”

Nebraska entered the game shooting just 35.3 percent from behind the arc, but went 11-of-26 against the Terps. Some were made off defensive breakdowns. Others were more fortuitous shots, including a near-half court heave by Sam Haiby with the shot clock expiring that banked off the glass and in.

“Everything they looked at tonight seemed like it went in during the first half,” Bibby said.

Haiby scored 24 points Thursday afternoon, the kind of performance that reminds Maryland of the fickle nature of single-elimination tournaments, the statistical flukes that can decide an entire season.

But on this day, the Terps had the better guard, and that was the deciding factor that pushed them into the next round, into another win or go home situation.

“You’re not going to continue to have 20 or 30 point blowouts at the end of your season… when you can win ugly, I’ll take it,” Frese said. “…We didn’t get rattled… I thought the last 10 minutes really displayed the psyche of this team… They all have a belief in each other on both ends of the floor and that bodes well for March.”