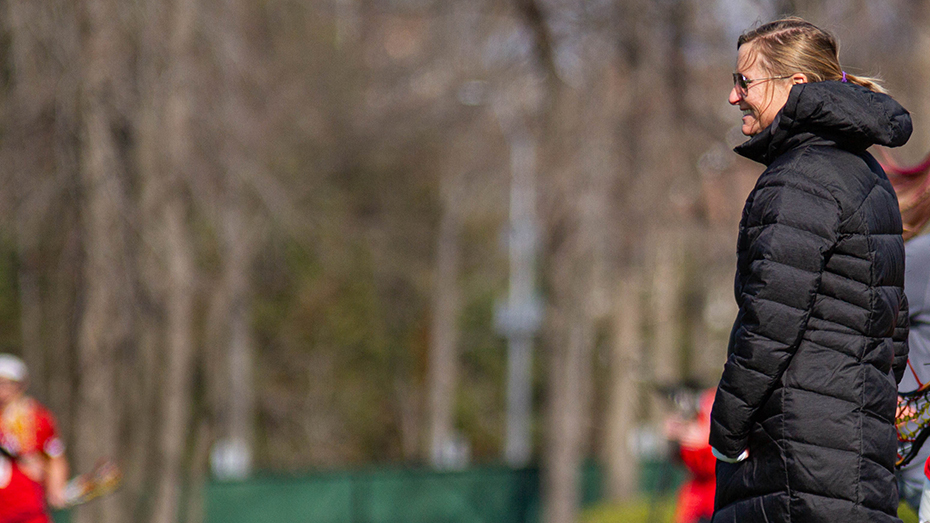 Megan Taylor graduated from this university almost two years ago, but her absence has left a hole in Maryland women’s lacrosse ever since.

Coming off of their 2019 national championship, the Terps searched for a player who would step up and take control between the sticks. After platooning the position during 2020’s shortened season, Emily Sterling has emerged as the No. 1 in net, due in no small part to her rapid development during her brief time at Maryland.

“She’s really had the opportunity to come into herself,” captain Brindi Griffin said. “Playing against her everyday, she’s an awesome goalie. She makes all of us attackers better.”

Sterling went into her freshman year vying for a chance to be the new rock in goal for the Terps. And although she’s not quite a carbon copy of Taylor, coach Cathy Reese says Sterling’s finding her own role in the Maryland lineup.

Sterling came into the 2020 season still recovering from a knee injury, but when the season opener came around, she was right there competing with fellow keepers Maddie McSally and Madison Hine. She made appearances in the second halves of the year’s first two games and then found herself starting and playing almost the entire game against North Carolina.

There was still much to be desired from those first few appearances. Sterling was unable to record a save percentage over .364 and struggled mightily in a loss to the Tar Heels, conceding 17 goals with only seven saves.

However, Reese said Sterling has earned the spot in goal this year through her time in practice.

“She’s had a full year to continue to just develop, build confidence, regain confidence in herself and what she’s physically able to do now that she’s recovered,” Reese said.

Confidence has been key for the sophomore. She said that confidence in not only herself but also her teammates is what will elevate the defensive unit to the next level.

And right now, Sterling appears to be incredibly confident in practice.

“I love practices,” she said. “We go in ready to play, attack each day. Learn something new, make each other better and get better yourself.”

Her positive attitude toward practice looks to be showing concrete results through three games. Sterling came out slow against Penn State in the season opener, conceding 15 goals to the now-No. 7 Nittany Lions. However, in the Terps’ last series with No. 15 Michigan, she held strong, delivering both wins and boosting her save percentages over .400 for the first time in her career.

Maryland will need another strong performance from Sterling and the Terps’ backline to thwart the surging Johns Hopkins (2-3) who were able to sweep Ohio State last weekend.

The upcoming matchup was meant to be the opening game of 2021, however due to positive COVID tests in the Blue Jays program, the game was postponed.

Maryland has had lots of time to practice with a 12-day break between games and Reese said it was much-needed. She said her squad focused on what they needed to do to keep getting better from game to game, an approach that Sterling and her teammates have taken to heart.

“We’ve been playing together, having each other’s back, communicating more,” Sterling said. “Just stepping out and having confidence when we play. Just the little things that all add up to the bigger picture for us.”