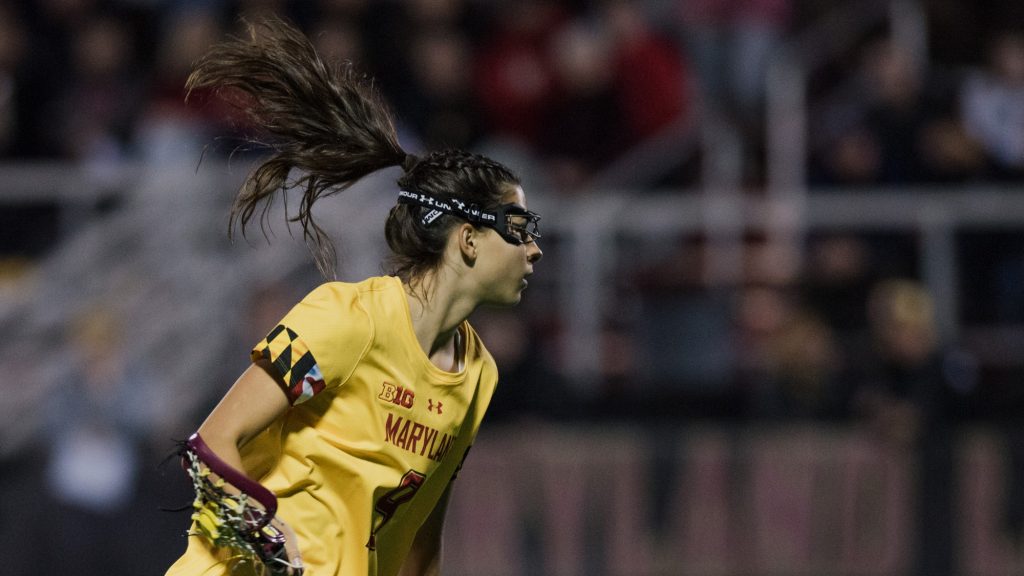 Maryland women’s lacrosse goalie Emily Sterling thumped her stick into the turf — showing signs of frustration having conceded her seventh goal of the day.

After beating out Maddie McSally for the starting spot in the cage, Sterling was met with an onslaught of meticulous offense from Penn State — a performance that the Terps couldn’t replicate on the other end.

Maryland’s defense struggled to put a cage on the No. 21 Nittany Lions as they fell 15-13 in their first game of the 2021 season.

“We were caught back on our heels a little bit,” coach Cathy Reese said. “We were a little hesitant and weren’t as tough as we would have liked.”

The Terps were unable to contend with the first half efficiency of the Penn State attack as the home team sent their first 13 shots right at Sterling — eight of which found the net. And they only continued from there, matching every Maryland response with quick scores of their own — sending the Terps back to College Park with nothing to show for it.

[With gaps to fill, Maryland women’s lacrosse prepares for an unpredictable 2021 season]

Grace Griffin opened up the scoring for the season, shoveling in a botched save from Penn State goalie Taylor Suplee. However, the Lions were quick to respond with three goals, all getting up close and personal to Maryland’s net.

The sister tandem of Catie and Libby May kept the Terps in the match. Catie May put away a free position shot before linking up with her sister for back-to-back goals.

However, Maryland struggled to keep the home side off the board.

The Nittany Lions scored two quick goals out of the timeout, and tacked on a couple more in short order. By halftime, Penn State led 8-4, keeping Maryland at arm’s length to finish out the opening half.

“Penn State went hard and they ran through our defense and got some easy looks on goal,” Reese said.

But the second half was a far tighter affair.

The Terps came out with a renewed intensity, earning three free position shots and putting all three away. Having started 1-5 on those opportunities, Maryland picked up their efficiency early in the half.

“We had good energy going into the second half,” Catie May said. “If we keep working on that, that’ll be really great for us.”

However, Penn State seemed to have a reply for every Terps push. Sophia Triandafils stifled their offense by getting herself open in front of net and slotting another goal past Emily Sterling.

Both sides traded chances to take over the matchup over the course of the second half, as Maryland clawed itself back into the game. Libby May made her presence felt, setting up a simple shot in front of the net for Brindi Griffin. Less than a minute, Libby May tacked on a goal of her own from a free position to tie the game at 9-9.

Still, Penn State was fast out of a timeout again, scoring two goals in quick succession, highlighted by Olivia Dirks weaving her way right through the Maryland defense and getting one past Sterling.

But the momentum shifted again, with Libby May tacking on two more to tie the game at 11.

And the teams traded goals, while Libby May continued to motivate the Maryland offense. The Nittany Lions, though, were always swift to reply to anything the Terps threw at them.

“Keeping confident is all I can do,” Libby May said.

Dirks put away Maryland with two goals at the end of the match as she dodged her way through the Maryland backline, sending them home with a narrow loss.

And the struggles for Maryland continued from the pandemic-shortened 2020 season, as the Terps dropped their first opener since 2006.

“Starting off this season in the Big Ten conference is tough,” Reese said “But it felt great to be back out there again and have the whole game atmosphere surrounding everything.”