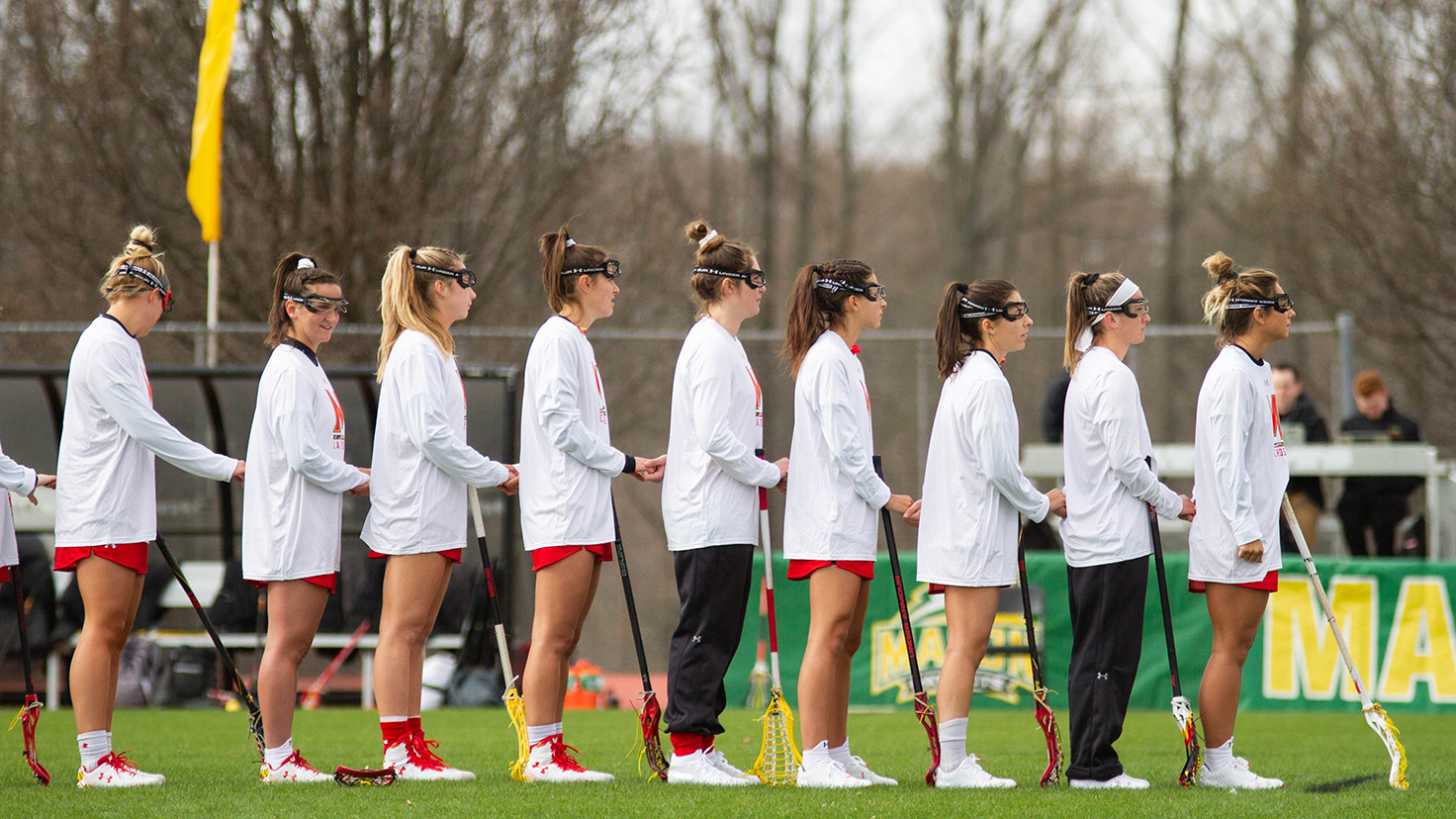 Maryland's women lacrosse players stand for the national anthem prior to the Terps' 19-6 win over George Mason on Feb. 8, 2020 in Fairfax, Va. (Julia Nikhinson/The Diamondback)

Maryland women’s lacrosse has had to defend national titles before — but never the same one in consecutive years. After the 2020 season was canceled, Maryland remains the most recent team to win it all, following its 2019 victory.

As lacrosse comes back to College Park for the first time since March 2020, the Terps revealed their 2021 Big Ten-only schedule Thursday.

The Terps will play each team in the Big Ten twice. While Maryland will have both home and away matchups with Johns Hopkins and Rutgers, they will host both games against Michigan and Ohio State and travel for both contests with Northwestern and Penn State.

The Terps will start their second defense of the 2019 national championship on Feb. 14 when they travel to Johns Hopkins.

After the season opener, the Terps will travel to Penn State on Feb. 21, before their home opening weekend with two matchups against Michigan on Feb. 26 and 28. Following a two-week gap, Maryland will host Ohio State on March 19 and 21.

At the end of March, the Terps face a key weekend in Evanston against Northwestern, who were the last Big Ten team to beat them and the only team to take a game off of Maryland in 2019.

Last season, Maryland made it through six games of the 2020 campaign before the season was canceled due to the COVID-19 pandemic.

The Terps were set to face Rutgers in their first conference game of the season, hoping to continue their stellar Big Ten record from the season prior; however, the two never faced off. The Scarlet Knights will clash with Maryland on April 9.

After that, the schedule gets busier. Maryland will travel to Penn State on April 11, before hosting Johns Hopkins on April 16. The Terps will conclude the regular season with a trip to Rutgers on April 18.

Maryland struggled to get its footing in 2020, having the season cut off with a 3-3 record. However, Maryland returns all but two starters from last year and should see the return of defender Lizzie Colson, after an injury kept her sidelined in 2020.

With a host of skilled players set to contribute in 2021, the Terps will be hoping to return to the pinnacle of college lacrosse once more.