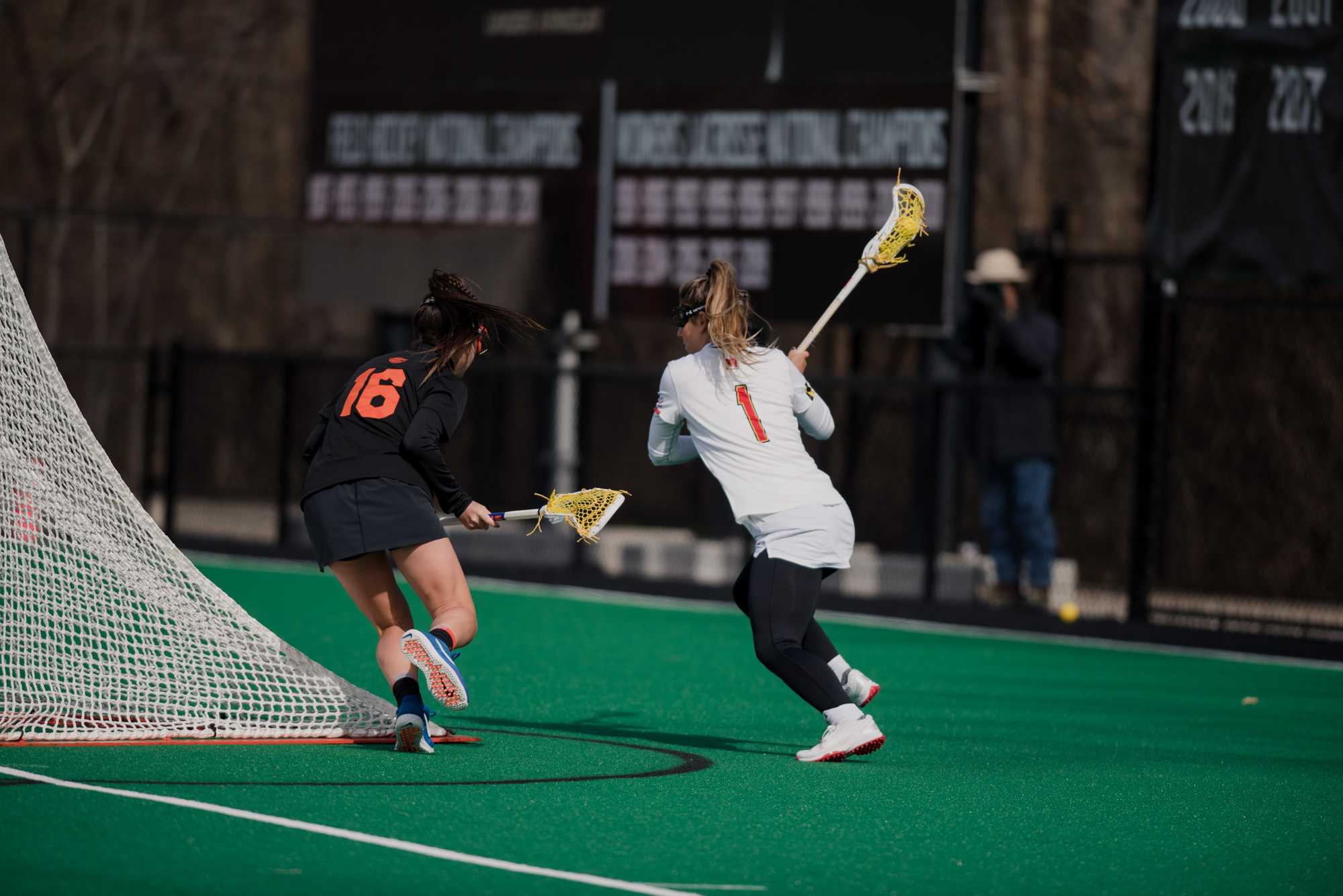 After North Carolina attacker Katie Hoeg forced the ball out of Maryland women’s lacrosse midfielder Hannah Warther’s possession in the first half of Saturday’s top-five matchup, the Tar Heels’ offense took off.

North Carolina quickly turned its attention toward the opposite end of the field, picking up the ground ball and rushing to the Terps’ goal. Warther had no option but to foul attacker Jamie Ortega, who had the ball for North Carolina.

Turnovers such as that one became a glaring problem for Maryland on the day, as Ortega sank her free-position shot to extend her team’s edge. Ortega’s seven points helped lead the Tar Heels over Maryland in a 19-6 thrashing, handing the Terps their second consecutive loss for the first time since 2006.

Maryland came out hot with attacker Brindi Griffin scoring on a free-position shot in the first minute. Griffin has struggled to impact games early this season, but against the Tar Heels, she made her presence felt.

The Terps started strong on their few first defensive stands, but a wrap-around goal from Ortega, North Carolina’s leading goal-scorer, drew it level.

“I’m proud of our defense and how we played today,” captain Meghan Doherty said. “We made quite an improvement from last week to this week.”

Goalkeeper Emily Sterling, in her first collegiate start in net, made a big save on the second free-position shot she faced from midfielder Scottie Rose Growney, one of the Tar Heels’ go-to players. However, the big play was canceled out as Growney charged toward goal and put in a rebound shot.

North Carolina scored its third in a row on a free-position from Hoeg, the 11th-best point scorer in the nation last season, as she planted her foot and rocketed a shot into the top left corner.

Griffin had the opportunity to cut down the deficit with another free-position shot, but the possession resulted in a Maryland turnover.

However, Griffin got the Terps back in the game, taking a pass from attacker Catie May and turning on her defender inside the crease before shoveling the ball into the net to make it 3-2.

Ortega was able to get the Tar Heels moving again, creating space in between herself and senior defender Meghan Doherty before scoring her 16th of the season.

As the Terps continued to chase, midfielder Kate Sites boosted their offense, scoring her first collegiate goal on the transition. Sites was able to outrun her defender and weave a shot through the North Carolina defense.

The Tar Heels dominated the end of the half, scoring three more unanswered goals, two of which came off turnovers — a problem that plagued Maryland as North Carolina proved clinical in scoring on the transition.

May brought the lead back down to three goals at halftime, finishing a shot after a well-placed pass by attacker Kali Hartshorn. Maryland went into the second half down 7-4.

Hoeg opened up scoring for the second half, quickly followed up by a goal from attacker Tayler Warehime, it was the second goal for both.

Growney continued to cause problems for the Terps’ defense, getting her fourth goal on a free-position shot.

Maryland struggled to keep Florida’s Shannon Kavanagh in check in its last game. And against the Tar Heels, they struggled to stop their top four scorers — Growney, Hoeg, Ortega and Warehime all scored multiple goals.

Warther was able to tack on two goals early in the second half for the Terps. Both came from dodging the North Carolina defense and putting the ball past the keeper on the far side.

“We needed to be tougher on the offensive end,” Reese said. “We’re seeing that from Hannah Warther whose going hard, but we need to see that translate to the other people on the field, too.”

The Tar Heels continued to keep their distance from Maryland, though, as midfielders Ally Mastroianni, Brooklyn Neumen and Marisa DiVietro notched their first goals of the day.

North Carolina knocked in goal after goal in the second half, ruthlessly handing the Terps a second loss, 19-6, three games into the season.

“Defensively, we had some much better sequences where we did cause some … opportunities to win balls and knock down from there,” Reese said. “Offensively, we weren’t good anywhere. We need to do everything better. Last game against Florida, we didn’t shoot well, but today we didn’t even generate shots.”