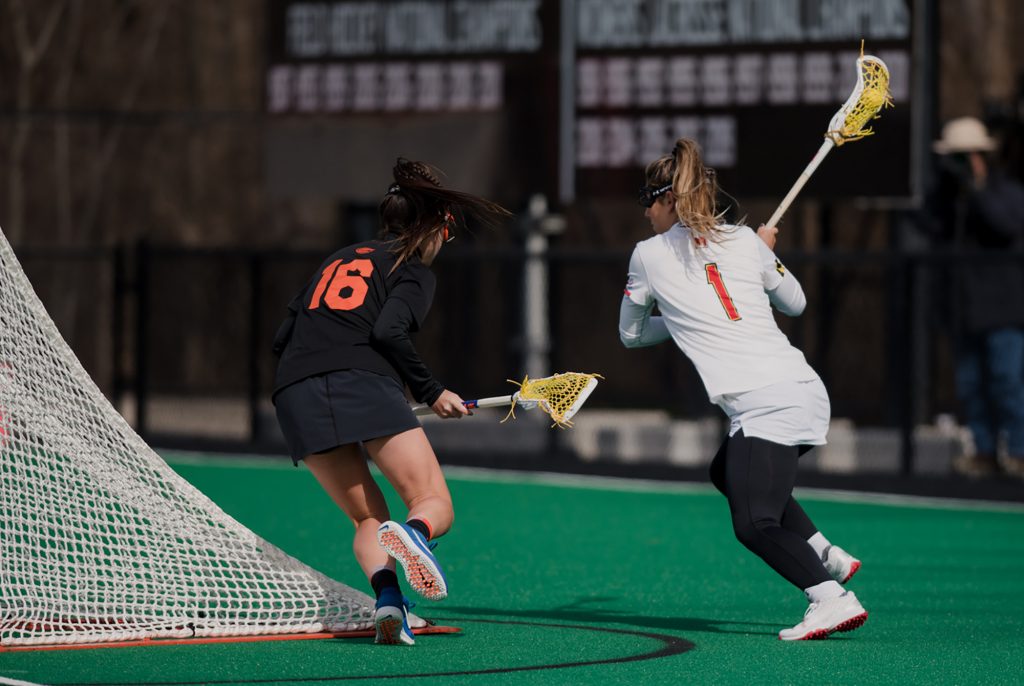 For eight years, every time Maryland women’s lacrosse strutted off the Field Hockey and Lacrosse pitch after the final whistle, it did so as victors.

But on Saturday, it was Florida who scrambled across the field in delight, after securing a 15-14 win to end Maryland’s home-winning streak at 86.

And after their shocking defeat, the Terps are hoping to fall back on their selfless style of play to get back on track for a title-defending campaign.

“Our heads are in the right places,” said coach Cathy Reese. “We’re very optimistic at what our possibilities are. A lot of it is putting these pieces together … There’s things that we hold ourselves accountable for that a loss, at any time in the season, helps you reevaluate.”

Against George Mason, Maryland struggled to get its offense up to speed. However, once it did, Reese’s squad didn’t stop, racking up 19 goals with ease.

But the Gators proved far more resolute than the Patriots. And as the game progressed and Florida grew in confidence, the Terps wobbled.

Many of Maryland’s woes on Saturday came down to losing in individual moments, which will be a focal point in this week’s practices, said captain Brindi Griffin.

[Read more: Even in a loss, Hannah Warther and Shaylan Ahearn stood out for Maryland lacrosse]

The Terps are hoping these individual plays — making the extra pass, clearing the ball when attackers are closing in — helps rekindle the team’s selflessness, a key tenet of Reese’s game plan which faltered Saturday.

“We were very individualized against Florida,” said freshman Shaylan Ahearn. “We all have more confidence in each other than we almost do in ourselves. Having that confidence within individual players and that confidence that [in] person next to you…[makes] plays happen.”

Both Reese and Ahearn said the team spent too long watching other players on offense. But, Reese’s squad has faith that its generous playstyle will improve as the season goes on.

“I don’t think we have any selfish players,” Ahearn said. “When someone does go to goal, it’s because it’s the best choice.”

As Maryland moves forward, its schedule doesn’t get easier. A road matchup with No. 1 North Carolina looms — one of a few teams that have handed the team a loss in regular season play in recent years.

However, the Terps say results aren’t central in their minds. Instead, they’re focused on re-establishing the selflessness that was so paramount to their championship run last campaign.