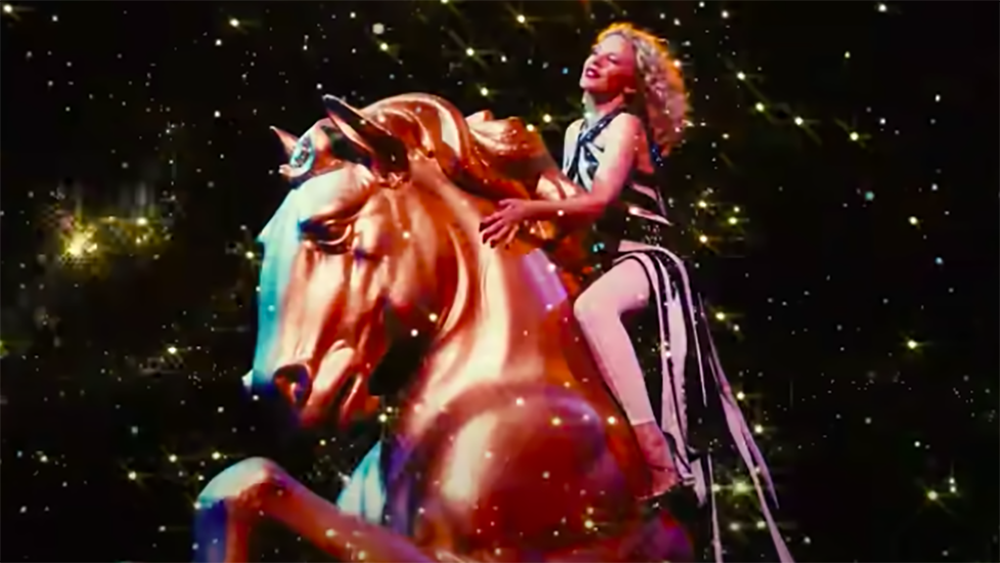 Kylie Minogue stuns in the music video for 'Say Something.' (Screenshot via YouTube)

This year has ushered in a new era of disco music. As a fan of the genre, I fawn over artists such as Lady Gaga, Dua Lipa, The Weeknd and Doja Cat for taking inspiration from the iconic sound of the ’70s. Yet some, like myself, still crave that full-blown disco sound. Then, ’90s pop icon Kylie Minogue returned to the music scene.

Minogue’s 15th studio album, appropriately named DISCO, transports the listener to the times of Studio 54 and bell-bottoms. The standard version of the album provides listeners with about 42 minutes of new music, while the deluxe provides about an extra 12.

If you’re looking for an album with a deep emotional meaning, I can guarantee this one is not for you. Minogue offers a pure disco experience for the listener, with tracks that sound like they could be from the actual era. It plays off one of disco’s typical tropes: love. There are songs about being in love, lusting for love, leaving a lover, losing your lover, finding new love — and, of course, dancing till the crack of dawn.

What Minogue does so successfully is update the sound while still keeping it super classic. The album brings disco into the modern era but doesn’t ditch the sound that everyone fell in love with. It uses modern sounds and techniques to deliver that classic sound. There’s songs that start off as piano ballads then speed up to the sound of strings and synths; there’s songs with fun percussion beats; there’s songs with odd voice-overs that somehow work; there is every disco song stereotype you can think of. One song you’ll be shaking it on the dance floor, then the next you’re doing a little more of a sway.

When the album was announced, I had low expectations. I wasn’t in love with the first single, “Say Something,” because it reminded me of a lot of Minogue’s previous work (specifically “Better Than Today”). I almost didn’t give the two promotional singles, “Magic” and “I Love It,” a chance after my disappointment.

I don’t believe “Say Something” was the strongest way to introduce this era. It’s not the most disco-y song — it falls more into the category of disco-inspired. But that’s one of the very successful things the album does: It offers peaks and valleys in its music. It’s not a streamline of fast-paced dance songs, but it’s not all the same slowed-down, relaxed disco sound some listeners love.

I’m someone who tends to like the disco songs that start with a slow beat and jump to high energy. “Where Does the DJ Go?” follows that formula and reminds me of a lot of disco classics such as “No More Tears (Enough is Enough)” by Donna Summer and Barbra Streisand. “Monday Blues” follows that same upbeat pattern and makes for a great song to dance to. On the opposite end, “Fine Wine” is more of a slowed down dance track that makes for an enjoyable sound. I will say that the entire album is a home run for me.

All in all, DISCO is a very enjoyable album. It provides a break from everyday life to just dance around like nobody’s watching. If you’re looking for a fun album, then DISCO would be perfect for you.